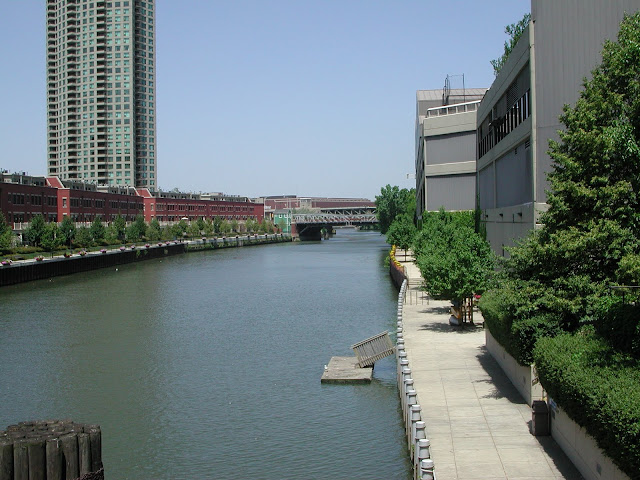 In the distance we can see the West Grand Avenue Bridge, a single leaf bascule through truss bridge with a rack and pinion lifting mechanism built in 1914. Just behind it (to the north) are the two Ohio Street Bridges that carry I-90/94 (the main east west expressway) over the North Chicago River. These bridges are double leaf bascule deck trusses built in 1954. You can walk under both bridges on the sidewalk provided along the river. The Grand Avenue Bridge provides 17 ft vertical clearance when it's closed and the Ohio Street Bridge provides 27 ft vertical clearance.

This is my last photo of bascule bridges across the Chicago River. They provide a contrast to the heel trunnion bascule bridges we previously looked at across the Sacramento River. The visible counterweight we saw on the Sacramento River bridges (and the lift and swing spans) would have been out of place in the beautiful architectural environment of downtown Chicago, except as an occasional unique monument to the past (like the Kinzie Railroad Bridge). We can get further insight by comparing the Chicago Bridges to the movable bridges across the Willamette River in Portland Oregon (see September 2009 blog entries) and with the movable bridges across the Harlem River in New York City (see July 2009 blog entries). In each case political and commercial interests played a larger or smaller role in the resulting bridges. I think it was only in Chicago that a strong aesthetic statement from the architect and planners took precedence over purely economic interests. The result is a truly gorgeous city with many beautiful bridges. Traveling from the countryside into Chicago must have been like Dorothy and her friends entering the City of Oz.

I only have a few photos of movable bridges remaining. If I knew I was going to be writing a blog on bridges, I would have photographed many more bridges during my travels. In the next few days we'll travel to Louisiana, Mississippi, Alabama, and particularly to Florida where bascule bridges play an important role for travelers.

I just want to mention that movable bridges are generally the province of mechanical engineers who are a unique kind of bridge engineer. Whenever a highway project is planned, we create a project team and a project manager. When the project is a roadside rest area, the manager is the architect and the structural engineer (me) does what they tell me to do. When the project is a fixed bridge, I get to be manager. For movable bridges, the mechanical engineer manages the project. As long as the main technical expert manages the project things generally go well (in my opinion). Any thoughts on all of this would be appreciated.