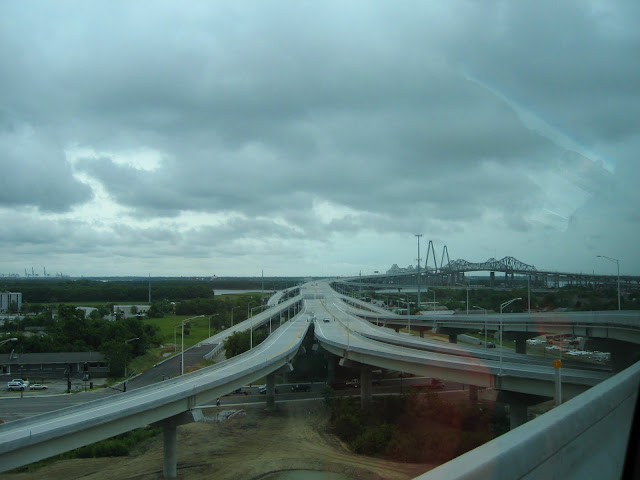 Ports can have a big impact on bridges. The new Cooper River Bridge replaced the 1929 Grace Memorial Bridge and the 1966 Silas Pearman Bridge with a structure that provides 58 meters of vertical clearance for ships heading up the Cooper River to the Port of Charleston. Although this is less than the 70 meters required by the largest container ships, it was sufficient incentive for the Port to put $50 million into the fund to replace the cantilever truss structures. Of course, that was a small fraction of the $700 million cost of this design-build project.

The truss bridges in the photo (taken while construction was being completed in 2005) are now gone. If you look closely you can see the concrete roadway suspended inside the diamond-shaped towers (and crossing over the old bridges). The Cooper River (or U. S. Senator Arthur Ravenel Jr) Bridge currently is the longest cable-stayed span in the U. S. at 471 m (1546 ft). We'll take a closer look at this interesting bridge tomorrow.