Bridges of Lyon, France: Viaduc SNCF across the Rhone River

Readers tired of California bridges will be happy to learn that I just returned from a trip to Lyon, France where I took many bridge photos. Lyon is an interesting city that sits on two hills (Fourviere and Croix-Rousse) with two rivers (the Saone and the Rhone) flowing between them. It was one of the most important cities of ancient Rome (called Lugdunum) and still has Roman aqueducts, theaters, and other ancient artifacts around Fourviere, which is a UNICEF World Heritage Site.

We'll begin our survey with a railroad bridge at the northern border of Lyon. The Viaduc SNCF crosses the Rhone a few meters downstream from the Pont Raymond Poincare, which is barely visible behind it. SNCF stands for Societe Nationale des Chemins de fer Francais, or the French National Railway which manages French railroads including freight trains, passenger trains, and the TGV, France's High Speed Rail Network.

The Viaduc SNCF is a long bridge that includes five reinforced concrete spans across the river. It was built as a cast iron bridge in 1856 and damaged by the Germans as they retreated from France in 1944 (see photo below). It was rebuilt as a reinforced concrete bridge in 1946. The piers look similar on the old and new bridges, which makes me wonder if they built the new bridge on the old piers? However the wide caissons are not visible in the photo below, which suggests the rebuilt bridge has new piers. I wonder if the wide caissons, squat piers, and haunched girders impede the river's flow at flood stage? I noticed uprooted trees lying on the caissons of several bridges across the Rhone. Apparently the Rhone can be a ferocious river when the snowmelt begins in the Alps. 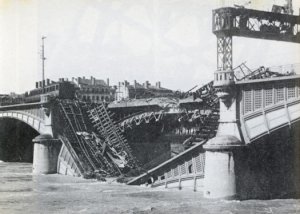 I was unprepared while getting a ride to the airport to suddenly find myself approaching the same bridges south of the river (see photos below). I barely had time to grab my camera and shoot a few photos before we drove past. Despite the limitations of these photos, I'm including them because they give us a different perspective on these long bridges. 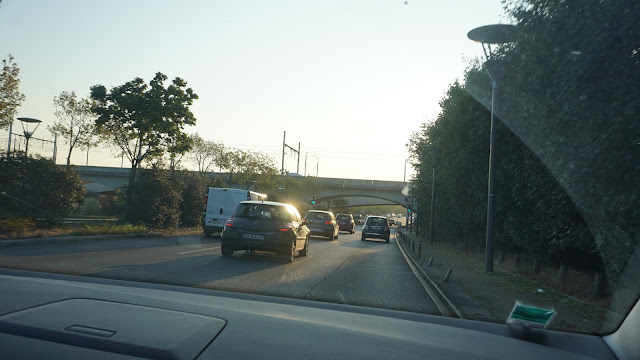 The Viaduc SNCF carries overhead lines, which power the trains and are present on all the railroad bridges I photographed in Lyon. The Viaduc SNCF even has architectural features on the edge girders to support the electroliers (top photo). 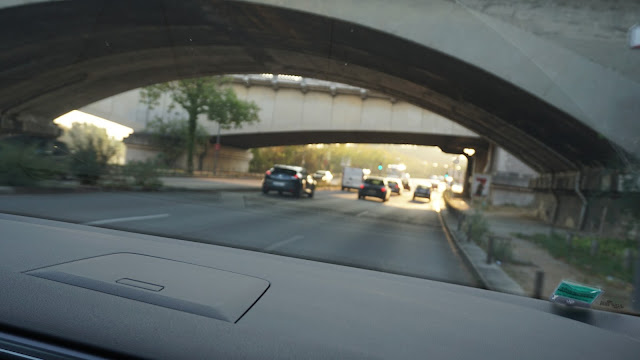 This work is licensed under a Creative Commons Attribution-NonCommercial-NoDerivatives 4.0 International License.
Posted by Mark Yashinsky at 9:00 AM 1 comment:

A modern timber bowstring truss carries pedestrians over the Mazda Raceway in the Laguna Seca Recreation Area. This interesting structure is almost hidden behind all the advertisements on display. 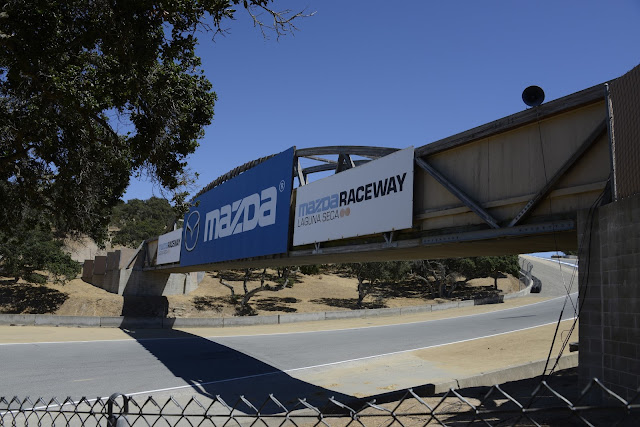 The top and bottom chords of the bridge are glulam members secured to the diagonal truss members with metal plates and bolts (shown below). The walkway is housed within a plywood structure built on the inside of the truss. 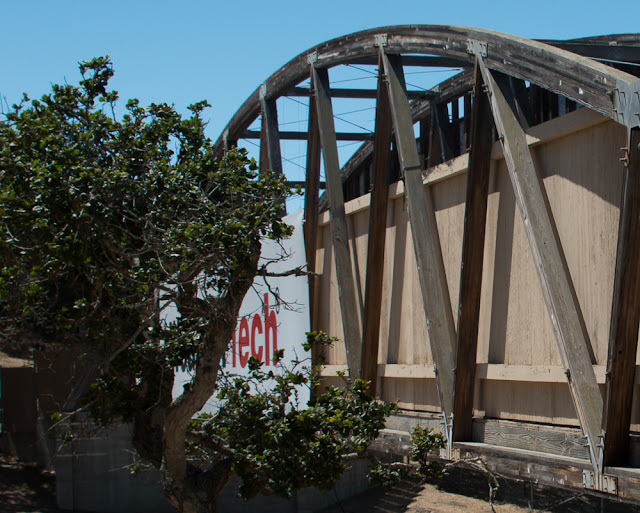 Pedestrian overcrossings built over freeways usually have a fencing on the inside to prevent people from throwing things onto the cars below. Maybe the plywood serves a similar purpose?
A few bracing members on the inside completes the job of securing the structure's shape. 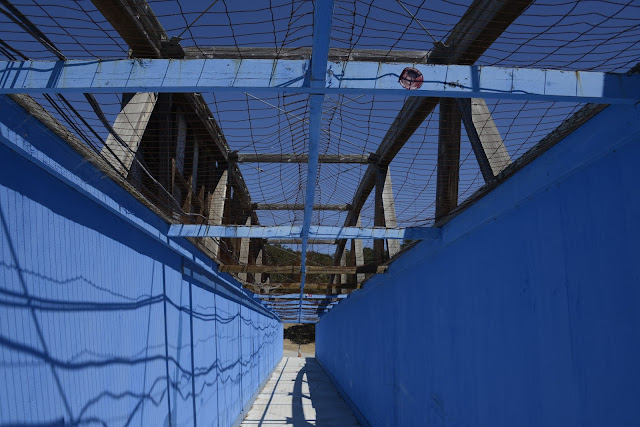 Google Earth provides an excellent view of the racecourse in 3D with our bowstring truss bridge in the foreground (the raceway looks more painterly than photographic!). We had to pay $8 to gain admission to the park so we could photograph the bridge. 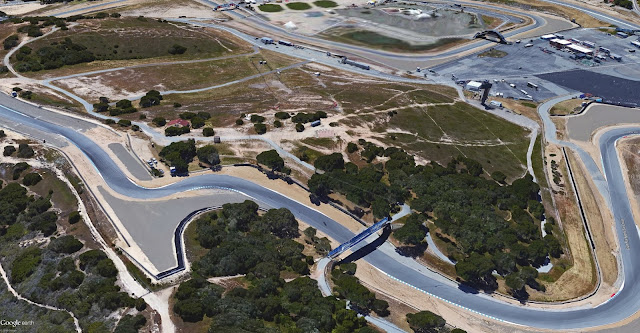 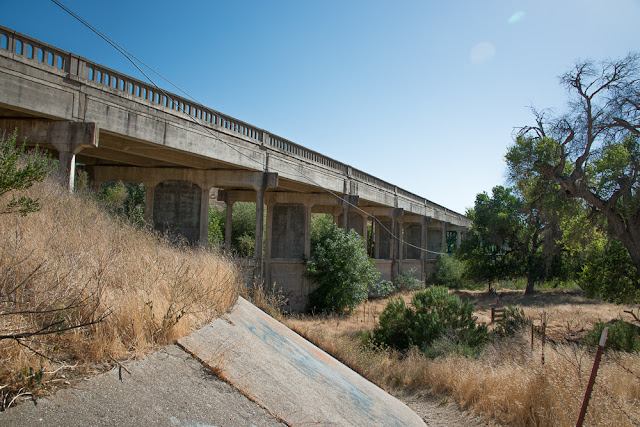 However, unlike the Cattlemen Road Bridge there was no seismic retrofit on the Bradley Road Bridge. The approach spans are supported on pier walls that turn into columns at the top. This is to allow flooding to flow around the piers unimpeded by columns. Not a great seismic design, although the infill walls between the two center columns provides some shear strength transversely (see photo above). 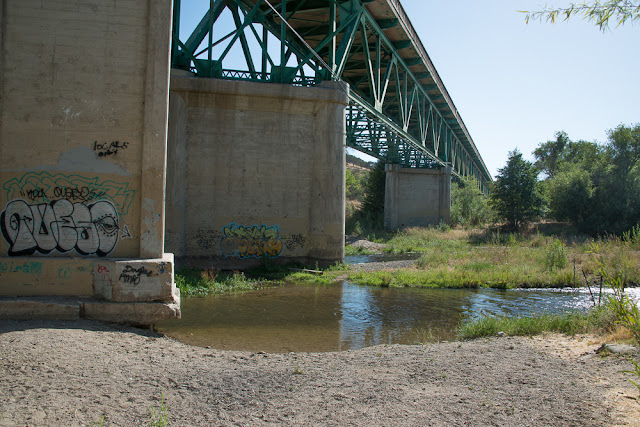 The main spans are 140 ft long Warren trusses on skewed pier walls. This county-owned bridge was built in 1930 and rehabilitated in 1954. The deck is only 24 ft wide and includes a small diameter horizontal curve.

The Cattleman Road Bridge is a deck truss structure. However, the vegetation is so dense around the bridge that I had a hard time photographing the truss, which is some distance from the approaches. The photo on the east end (above) shows the concrete T beam approach to the bridge. The photo below (from the Historic 101 website) shows the deck truss section on the west side of the bridge. There are more photos of the bridge by Craig Philpott on the Bridgehunter website. 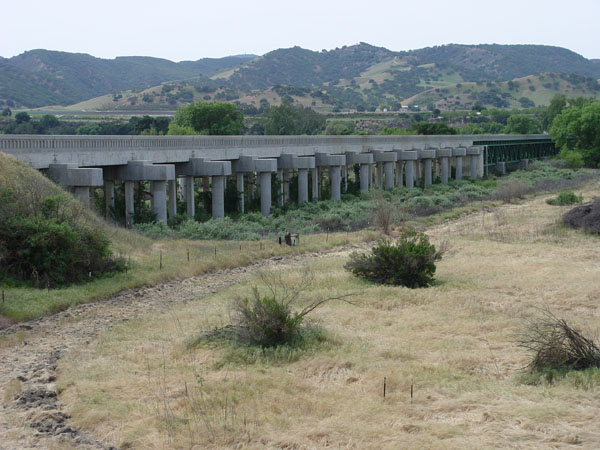 The Cattlemen Road Bridge (44C0101) is a 1654 ft long bridge across the Salinas River Floodplain. According to Craig Philpott the bridge's unusual appearance is due to a recent seismic retrofit that included a continuous barrier rail to hold the bridge together and restrain the movement on this long structure. Note the exterior pile shafts to restrain transverse displacement along with the shear keys on top of the extended bent caps.
Posted by Mark Yashinsky at 9:00 AM No comments: