One last look at the Port Mann Bridge (through the front window of our bus). I wonder why tied arches have so much cross-bracing? Maybe its for transport to the bridge site?

The new bridge will be supported by towers between the decks with big blocks on top with anchors for four planes of cables.

The government is attempting to make the new bridge more palatable to environmentalists by including bicycle and HOV lanes.

The Fraser is an odd sort of river. Freshly cut timber is still transported downstream through the city. Bridges on the Fraser must be well-protected to handle constant collisions with log booms and other river debris. An odd aspect of Vancouver is that virgin forests are just outside an expanding metropolis of about 3 million people.

There is a four mile gap between the Port Mann Bridge to the west and the Skytrain Cable-Stayed Bridge to the east across the Fraser River (see below). The river widens appreciably just before bending to the south. Perhaps the river is too wide to cross at this location with another cable-stayed bridge? 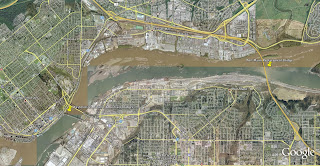