Continuing north on Highway 1 we arrived at the Noyo River Bridge (10 0298). This is a three span continuous, prestressed concrete box girder bridge. It has a 325 ft long main span and it was built in 2005. It's an odd looking bridge with columns that are recessed below the soffit to imitate a bridge on bearings. The columns have a stout shape with extra concrete that (hopefully) will spall off to allow the ductile core to undergo large displacements without breaking during an earthquake. 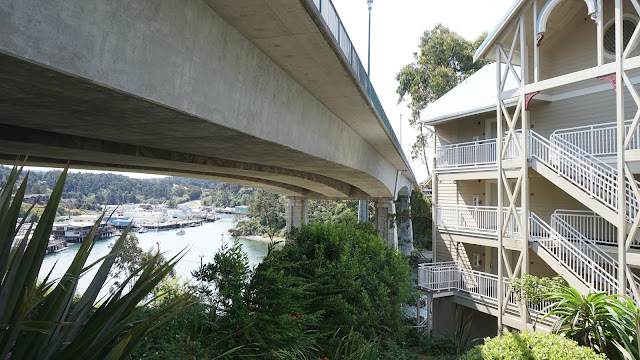 There was a fight between Caltrans and the community about various aspects of the proposed design of the bridge.  The bridge was to be located extremely close to commercial buildings along the bank and it doesn't look like a typical coastal bridge. One resident, Vince Taylor, fought Caltrans on the solid barrier rail that was originally proposed for the bridge. He provides a history of his hard-fought victory on the internet. 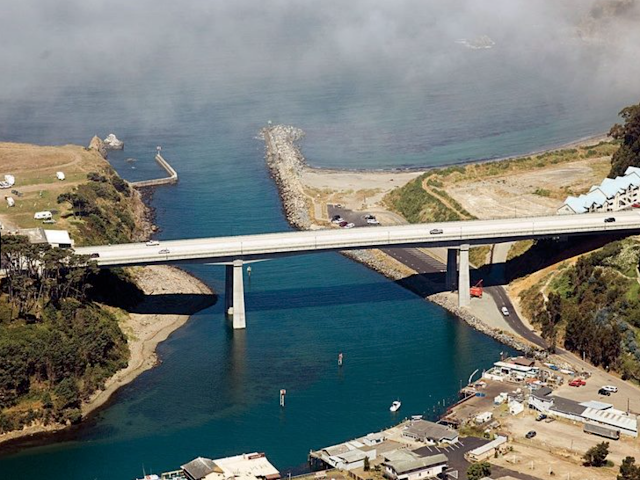 Tony Phillips provides an excellent pictorial history of the six different bridges that crossed the Noyo River near its mouth during the last 150 years. The first structure was a drawbridge that was built in 1861. Subsequent bridges were truss bridges until the current haunched box girder bridge was built.

This work is licensed under a Creative Commons Attribution-NonCommercial-NoDerivatives 4.0 International License.
Posted by Mark Yashinsky at 10:20 AM No comments:

Continuing north on Highway 1 we moved away from the coastline and crossed over the Caspar Creek Bridge (10 0153), a seven span continuous prestressed concrete structure on single column bents. This bridge was built in 1966. 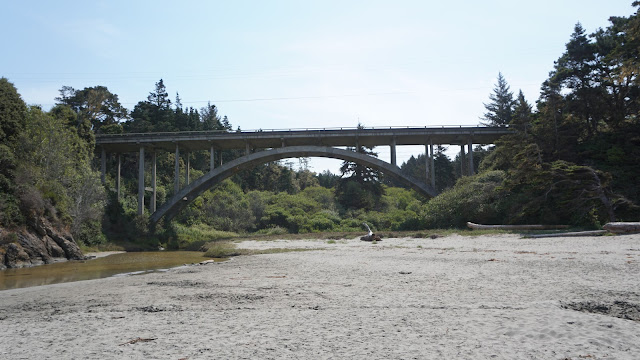 A little further north is the Jug Handle Creek Bridge (10 0154), a 388 ft long reinforced concrete bridge with a 210 ft long open spandrel arch span that was built in 1938. This bridge is farther from the headlands and consequently lower to the ground than last week's Russian Gulch Bridge. 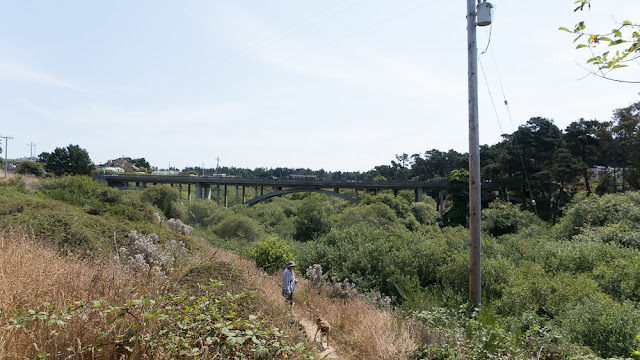 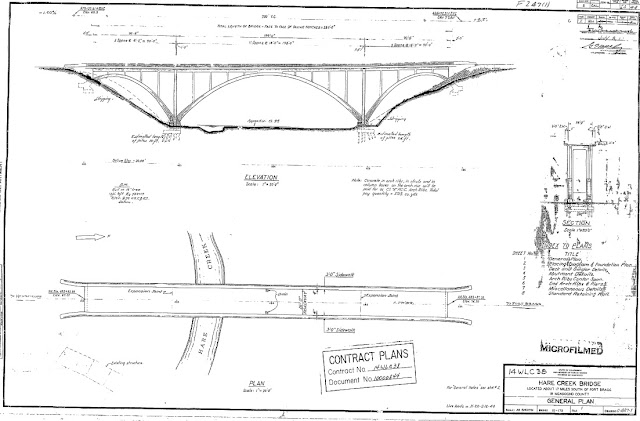 Continuing north on Highway 1 we arrived at the Russian Gulch Bridge (10 0151). This structure, built in 1940, is a well-regarded bridge with it's own Wikipedia page. Even more remarkably, it was renamed in 1974 after a Caltrans' bridge engineer (the Frederick W. Panhorst Bridge) although the bridge was actually designed by his subordinate Henry E. Kuphal. 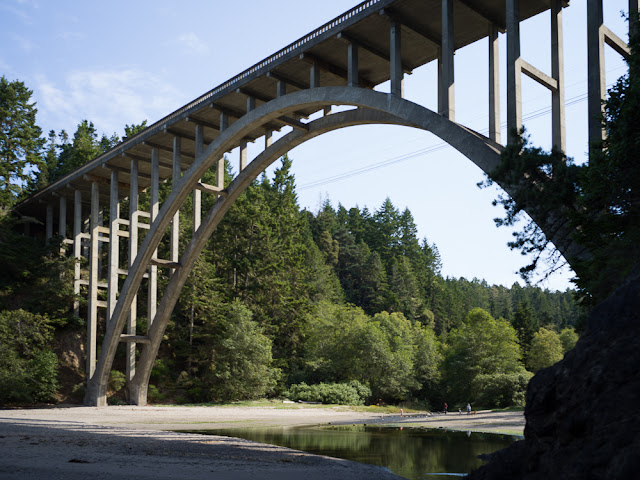 I stood as far back as I could along the narrow beach to shoot the top two photos. Jason Hollinger got an even better photo by going out to the headlands and turning back towards the shore. 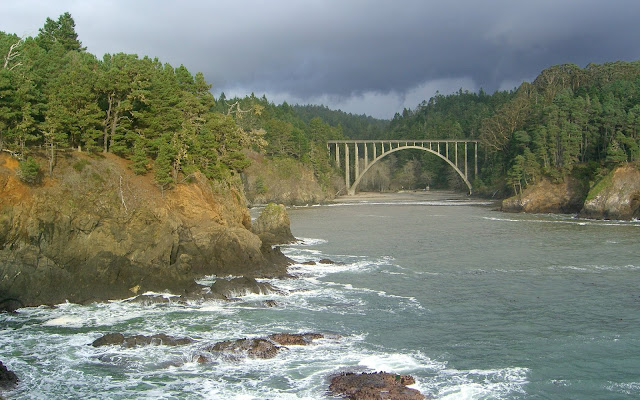 Caltrans bridge engineer Arthur Elliott (1911 - 2004), wrote that the bridge's appearance was improved by providing wider spaces between the taller spandrel columns and narrower spaces between the shorter columns (with a reference to ancient Greek architecture). That's too subtle a feature for me to appreciate. However, I do like the shape of the arch. 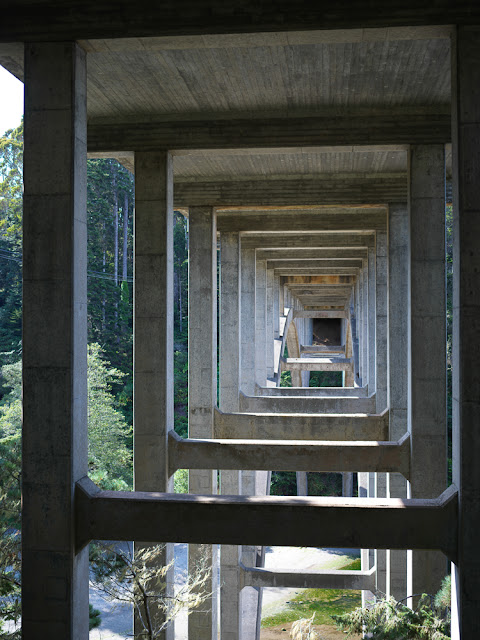 The Russian Gulch Bridge is a reinforced concrete open spandrel arch structure that is 527 ft long and has a 240 ft long arch span. There were hundreds of this type of arch bridge built in California during the first half of the 20th century, especially along the coast. They were the preferred method of stepping over a moderate obstacle. Today, this narrow beach might be crossed by a prestressed concrete box girder bridge or by a more streamlined arch structure. 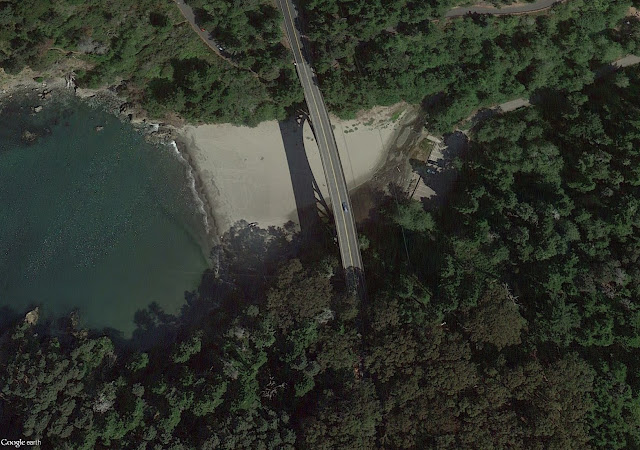 Continuing north on Highway 1 we arrived at Big River and the bridge that carries the highway across it. Walking along the river we saw people with their dogs along with joggers and hikers. The bridge is just south of the town of Mendocino and so a large community of people use the trail under the bridge to get their exercise. 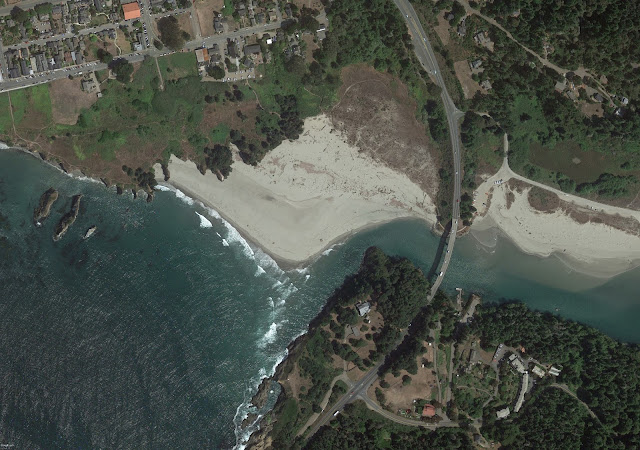 The history of Big River is about entrepreneurs who built sawmills, railroads, and bridges along the river to harvest and sell the forest of redwoods that once covered this region. All of that activity has disappeared without a trace. 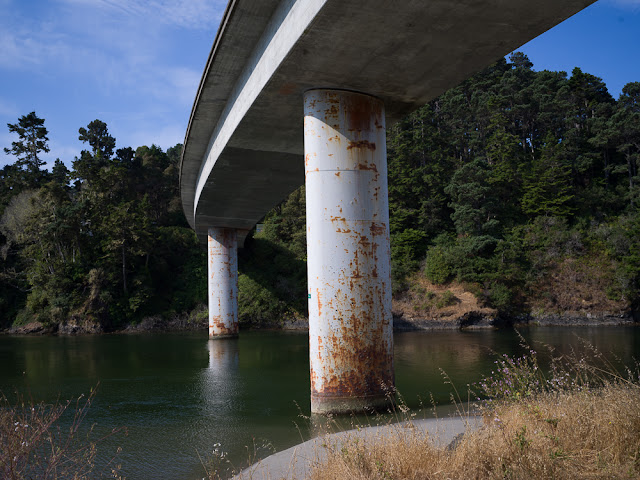 The Big River Bridge (10 0146) is a three span box girder structure on single column bents (built in 1962) with a 190 ft long center span. In 1994 the bridge columns were wrapped in steel casings to protect them from earthquakes. Unfortunately these casings soon began to rust due to the marine environment.

I wrote a year ago about the Albion community's reluctance to replace the aged Albion River Bridge. It's amazing all of the issues raised by a community of 200 people over this bridge replacement. Each individual has their own unique concerns about this project. How will the replacement affect the use of the harbor? Will fishing operations be affected? Will the influx of workers to build the replacement displace residents? What are the costs of repair versus replacement? 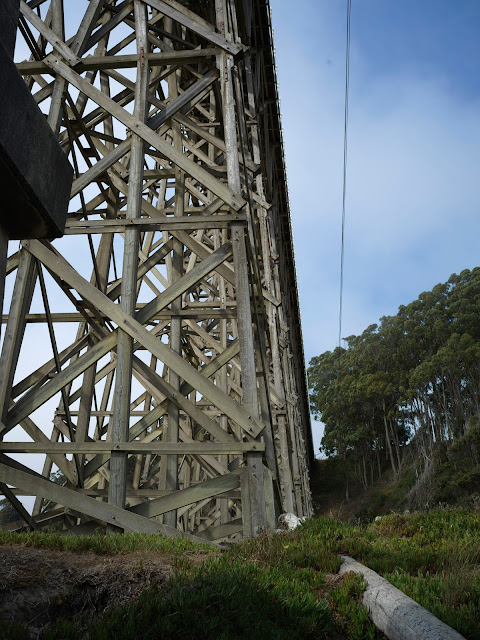 Whether the old bridge is rehabilitated or a new bridge is built, it will have a big impact on the community. I wonder how one could take this old bridge and repair/seismically retrofit it without replacing most of the members? This is an issue that is being addressed all over the world. How to preserve our past while preparing for the future? In the old days the government would just come in and do what it wanted but I think it's a good thing that the community gets a voice in these decisions. 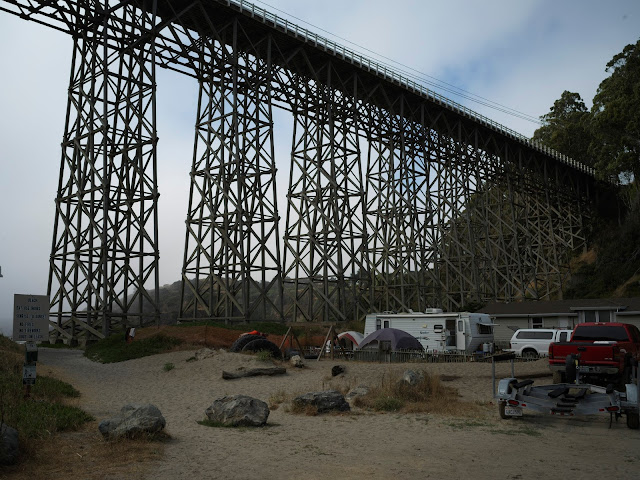 This work is licensed under a Creative Commons Attribution-NonCommercial-NoDerivatives 4.0 International License.
Posted by Mark Yashinsky at 8:54 AM No comments: