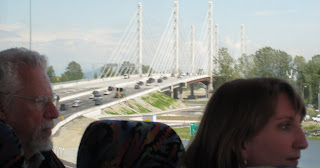 My only photo of the side of the Pitt River Bridge is from the inside of a bus (with Anshel and Monique in the photo). We were returning from a tour of Staves Dam, but we were in too big a hurry to stop, and I ended up missing my flight home anyway.

I've been taking bridge photos recently with a Canon SD780 IS that fits in the palm of my hand. I used to carry an SLR camera and a tripod on my trips, but lately I've been traveling lighter. The Canon takes good photos for such a tiny camera.

I think this photo has a painterly quality due to the distortion from the bus window. We can see the grassy bridge embankment but not the Pitt River. The steel girders are haunched and framed into the towers. There's no sign of the swing bridges, which must already have been removed.

I read that the toll revenues on the Golden Ears Bridge have been disappointing (and drivers have to pay for both directions of travel). I haven't read about the toll revenue on the Pitt River Bridge or if they've even started collecting tolls as yet (perhaps toll collection is automated). Traffic looks busy though moving east from Vancouver in the afternoon.

In the Google Earth photo below, we can see construction on the Pitt River Bridge near the top of the picture, the Golden Ears Bridge on the bottom right, and the Port Mann Bridge (which we'll be visiting tomorrow) on the left. This photo gives a good sense of the many waterways that residents must cross to get around the region. By the way, a good article on the Pitt River Bridge is in Issue Number 54 (March 2009) of the excellent journal Bridge Design and Engineering. 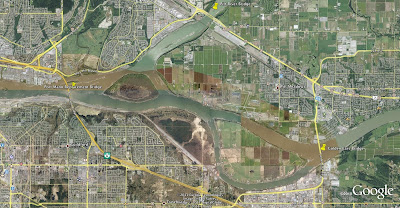