Unlike last week's Passerelle Palais de Justice, this week's Pont Marechal Juin (just upstream) is a much simpler and more elegant bridge. Since they were both designed by Gilbert Lamboley perhaps the engineer felt more comfortable with a box girder bridge or maybe he could express himself more freely without an architect? 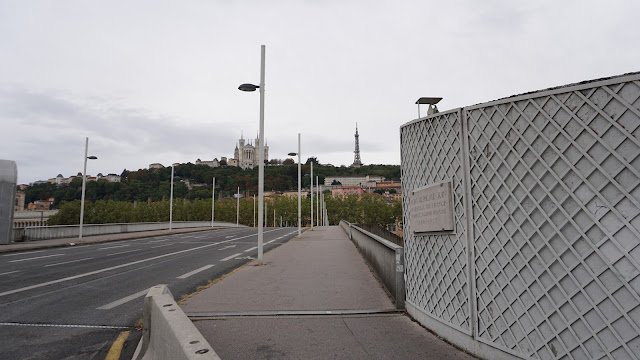 There has been a bridge near this site since 1070 (built using stones from the nearby Roman ruins). The previous bridge no longer met Lyon's traffic needs and so in 1971 the current bridge was built 200 meters downstream and aligned with Rue Grenette. 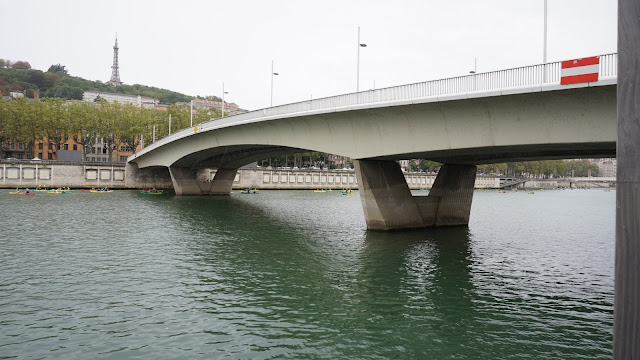 The Pont Marechal Juin is a 131.80 m (430 ft) long haunched three span, box girder bridge. Marshall Juin was a revered general who fought with native troops in Morocco where he lost the use of an arm during WWI.  He was captured by the Germans during the Battle of France, eventually freed and fought well in Italy; breaking the Gustav Line which resulted in the liberation of France. He opposed the Independence of Algeria in the 1960s and was forced into retirement. 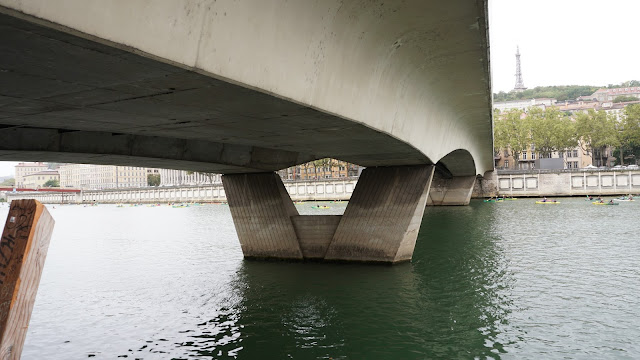 The Pont Marechal Juin is a nicely understated double box girder bridge with rounded exterior girders and overhangs. It's similar to several other three span river crossing in Lyon (we've seen similar piers on several other bridges). Still, repetition isn't a bad thing. It's on a parabolic vertical curve that matches the parabola of the haunched middle span. It reminds me of an abstract sculpture or of a nice piece of jewelry.

Another location with plenty written about previous structures but with little information on the current bridge. The Passerelle Palais de Justice sits in front of the Cour d'Appel de Lyon. It's a cable-stayed footbridge with a single tower near the left bank of the river. I wish I could have found more information about this bridge because of its odd details. For instance, a cable-stayed bridge with an eccentric single tower will have the cables behind the tower buried underground. However, this bridge has the cables anchored in what I assume is a sculpture (see photo below). 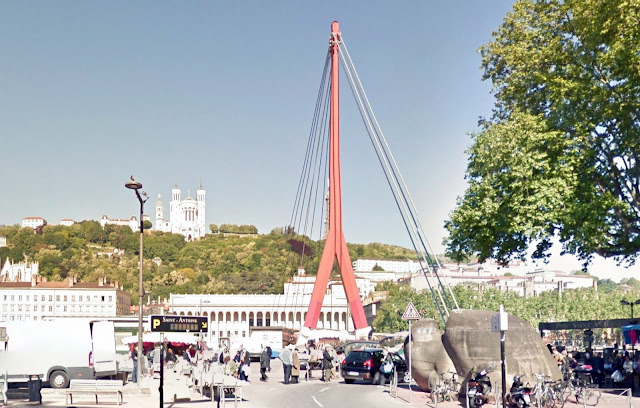 Speaking of sculptures, there is a statue at the other end of the bridge, in front of the court (see photo below). I assumed this sculpture depicted a hero from Greek mythology, until I found out that it's actually called 'The Weight of Oneself.' Well, I guess it's oneself as long as one is a young white man. The artists are Michael Elmgreen and Ingar Dragset and their sculpture was unveiled by the mayor of Lyon in 2013. 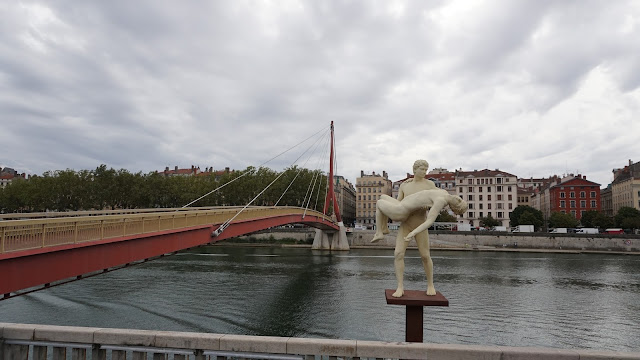 Returning to the bridge, the Passerelle Palais de Justice was designed by Gilbert Lamboley with architectural assistance from Charles Delfante and built by Baudin-Chateayneuf in 1983, according to the Structurae Website. The bridge is 136m (450 ft) long, only 4m (13 ft) wide, and with a tower on split legs that straddles the deck. 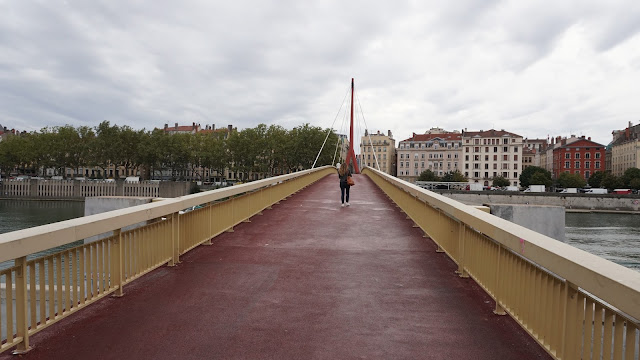 Despite the artistic paraphernalia that surrounds the bridge, I don't find it to be a very attractive structure. The tower looks puny on the big concrete foundation and the deck is unimpressive. I think it could have been a very dramatic structure if it was supported by an monolithic tower rising out of the water and if the deck was an elegant line stretching between the banks. Certainly the stately buildings that surround it are begging for a more dramatic statement across the river. 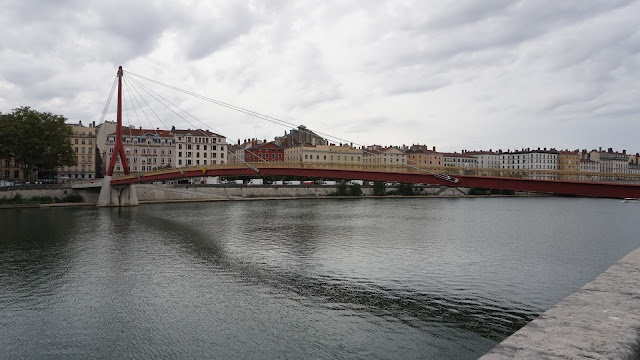 Bridges of Lyon, France: Pont Bonaparte across the Saone River

Continuing upstream along the Saone River we arrived at the Pont Bonaparte. This bridge looks old but it was actually built in 1950 (replacing a bridge destroyed by the retreating German Army). The Pont Bonaparte is a three span reinforced concrete arch bridge covered in stone. At 131m (430 ft) it's the longest bridge across the Saone. It was originally named the Pont Tilsit but the name was changed to Bonaparte in 1964. Tilsit is a town in Russia where a treaty was signed after Napoleon won a battle. 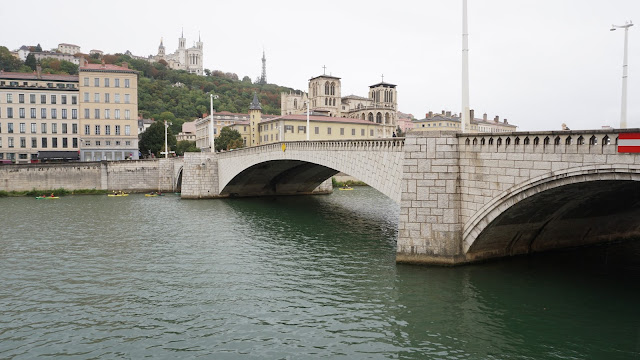 There's a lot written about previous bridges at this site (connecting Bellecour to Saint-Jean) but almost nothing about the current bridge. The Structurae Website provides little information other than referring the reader to 'Ponts et Quais de Lyon,' by Jean Pelletier. That author also discussed the previous bridges in great detail but provides little information about the current bridge. Pelletier provides a drawing by the Dutch artist Johannes Linglebach of a ten span timber bridge (with an arch bridge in the background) at Saint-Jean in 1644 (see picture below).

A painting at the same location by Joseph Fructus in 1820 looks similar (see below). Perhaps the stone arch bridge in this picture was named Pont Tilsit? That bridge was completed in 1807 but acted as a dam during floods and was demolished and rebuilt in 1864. However, it was recorded to be only five spans long. Perhaps Fructus' allowed himself some poetic license? 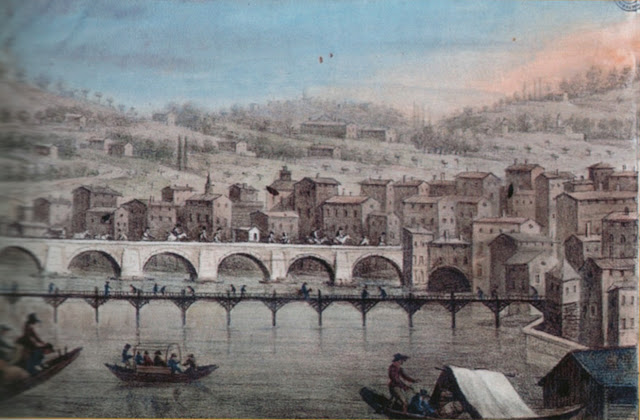 The 1864 replacement structure was the arch bridge destroyed by the Germans and rebuilt in 1950. It is a reinforced concrete arch covered in stone to resemble the previous bridge. All of the architectural details (the railing, the cutwaters, etc.) pay homage to the earlier arch bridges at this site. 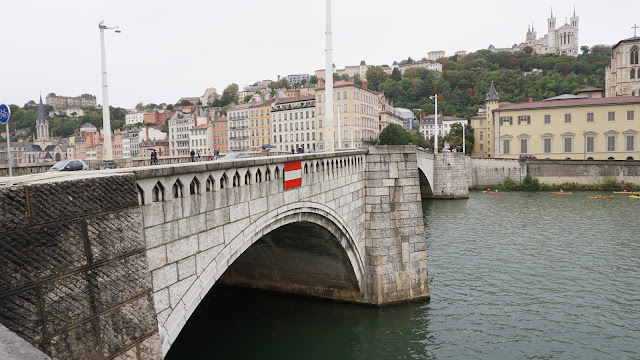 Bridges of Lyon: Passerelle Paul Couturier across the Saone River

A few hundred yards upstream from last week's Pont Kitchener-Marchand are the few remains of the Pont Ainay (by the stairs along the Quai Fulchiron). This arch bridge was demolished by the retreating German army and never rebuilt. A few hundred yards further upstream is the Passerelle Paul Couturier (formerly called Saint-Georges), a pedestrian suspension bridge. 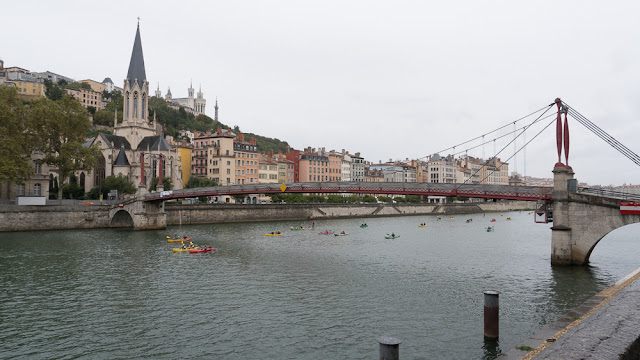 The Passerelle Paul Couturier was built in 1853, destroyed by the Germans in 1944, and rebuilt to match the original bridge after the war. The little deck is supported by oddly-shaped, pinned pylons on little stone arch side spans. The main span is 87m (286 ft) long. 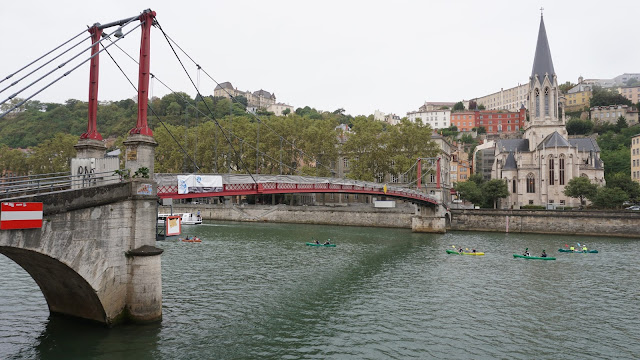 The bridge was named after Paul Couturier, a Lyon priest who worked to improve communication between different religions. At one end of the bridge is the Church of Saint George and at the other end is the Grande Synagogue of Lyon. 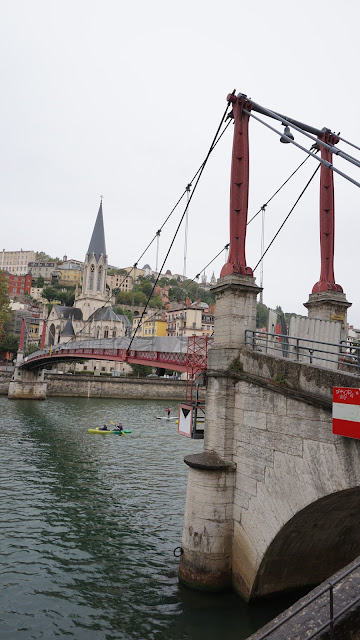 When I visited the bridge in September of 2016 it was closed for repairs. However, when I looked in Structurae they referred to an article in Bridge Design and Engineering that showed a complete rehabilitation for the bridge (by Freyssinet in 1999). Therefore, I would assume that the bridge is currently getting minor repairs or just being repainted.