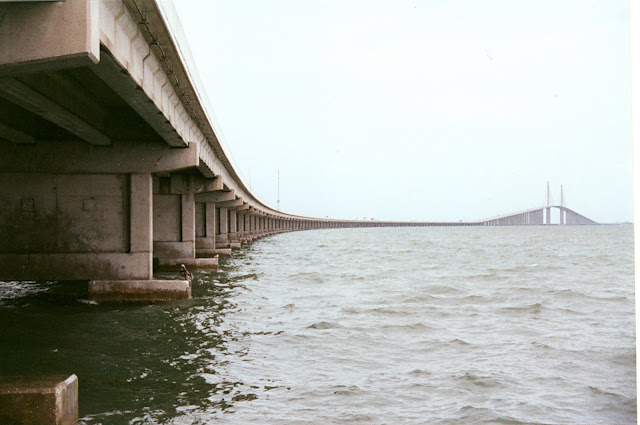 One last photo of the Sunshine Skyway Bridge. It's composed of two long approaches that suddenly rise up on sculpted piers 193 ft above mean sea level for the cable-stayed channel crossing.

As you can see in the photo, the approaches are squat pier walls supporting precast I girders and a concrete deck. The entire bridge is 5.5 miles long and crosses Tampa Bay just east of the Gulf of Mexico.

It's not apparent why these approach structures would perform any better than similar bridges we saw destroyed by Hurricane Katrina. I wonder if they've ever been tested by 200 mph storm surges? The girders sit in recesses in the bent caps that must act like shear keys, but they don't seem like they could resist a hurricane. Probably, the Florida DOT is content to protect the cable-stayed portion and can quickly rebuild the approaches after a big storm.