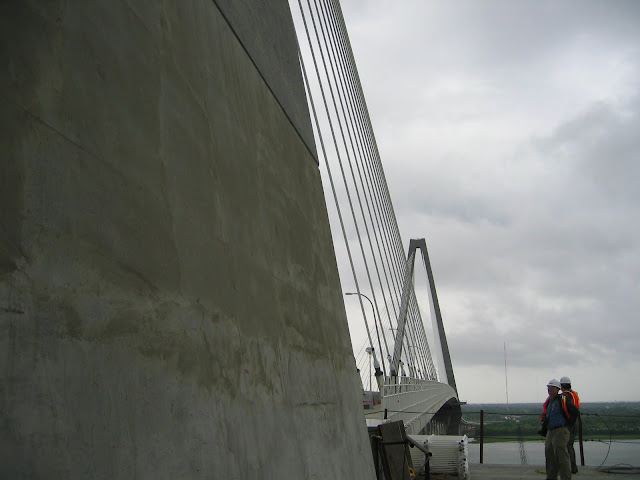 I must be standing on a platform extending out from the strut past the bridge tower. In this photo we have a nice view of one of the gravel islands built to protect the towers from ship impacts. The theory is that ships will run aground before they strike the tower. However, it looks to me that if the ship had a projecting element, it could still strike the tower. Look at that barge carrying the crane. If it was a container ship with a large prow, I could easily strike the tower.

This is another all concrete bridge like the previously studied Sunshine Skyway Bridge. However it appears that we've learned a few things about cable-stayed bridges in the intervening twenty years. The towers now have a more harmonious transition from under the deck to over the deck (if you don't mind the tower swelling around the deck). I also feel more comfortable with two planes of cable stays to support the superstructure (the bridge is designed for a M7.4 earthquake a few miles from the bridge site). And look at the fancy dampers and anchors that connect the cables to the deck. Also, the main span is somewhat longer (although still dwarfed by China's and Japan's cable-stayed bridges). The prestressed concrete superstructure is not directly supported by the towers (rubber snubbers prevent the superstructure from smashing into the tower legs during earthquakes and wind storms).

I have had nothing but trouble with design-build contracts. I don't know anyone who likes them. Usually the contractor goes broke, and the owner loses control of the project (the contractor is waiting for the owner to make a change so they can recompense their losses). I don't know if this contract was a happier experience. A friend at SCDOT told me they weren't specific enough in requiring on and off ramps at both ends of the bridge and paid dearly for that change order.

Note the bike lane sitting outside the cables. I believe this was also added after the contract began (hopefully without a painfully expensive change order). Bicyclists and pedestrians have to share this space.