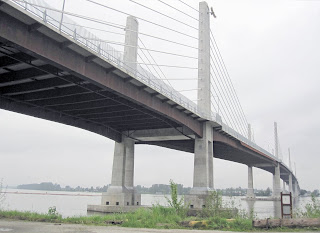 A closer look at the Golden Ears Bridge. Don Bergman from Buckland and Taylor kindly took me on a tour of this bridge on Thursday.

Don said the bridge owner was concerned about excessive settlement and so they provided openings in the pedestals for jacking the towers (the pile caps are supported by 12 - 8 ft diameter pile shafts). Above the pedestals at stiff Pier M2 (in the foreground) are steel plates that can form plastic hinges and give the bridge a more balanced response during earthquakes.

Note the complicated connection where the steel girders, towers, and tower struts meet. Also note the steel fairings on the outside of the main spans to control wind vibrations. The bridge has six lanes supported by two steel girders connected to long floor beams and a composite concrete deck. The deck is made of precast concrete segments laid on the floor beams and made composite with closure pours. Pedestrian/bike lanes are on the overhangs outside of the cable-stays.

The cables are parallel, at an extremely flat angle, and are distributed from the top to the bottom of the short towers. Don said the cables are composed of 7 galvanized wires per strand. Each strand is sheathed in polyethylene and placed parallel to the other strands. The interstices between the strands are filled with corrosion resistant material and the cable is wrapped in a polyethylene. Dampers control vibrations at the bottom of the stays.

This long bridge with its short towers is a very economical design. The superstructure is light and requires a minimum of support from towers and cables. Its not a very dramatic structure, but not every bridge needs to be dramatic. Its about 8000 ft long and 100 ft wide and cost $800 million CAD, which gives a unit cost of about $1000 per square ft.

We'll take one more look at the bridge (at one of its approaches) tomorrow.