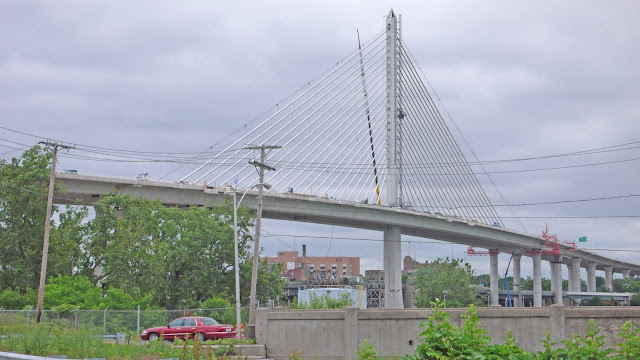 I came upon this bridge by chance while driving from Pennsylvania to Michigan. I wasn't even aware that the Maumee River was flowing under the bridge. Only later did it occur to me that this was the cable-stayed bridge my friend in Toledo was talking about.

The Veteran's Glass City Skyway includes a 612 ft span over the Maumee River. It replaced the movable Craig Memorial Bridge, which was named after a Medal of Honor winner. It was initially named the Maumee River Crossing, which created some controversy until it was renamed.

There are several unusual things about this bridge. It is one of the few cable-stayed bridges where the cables go through the tower (on saddles) to support the span on both sides. The 400 ft tall tower includes 384 light emitting diodes that provide displays that can be seen three miles away. It was designed by Figg Bridge Engineering, which was founded by one of the two designers of the Sunshine Skyway.