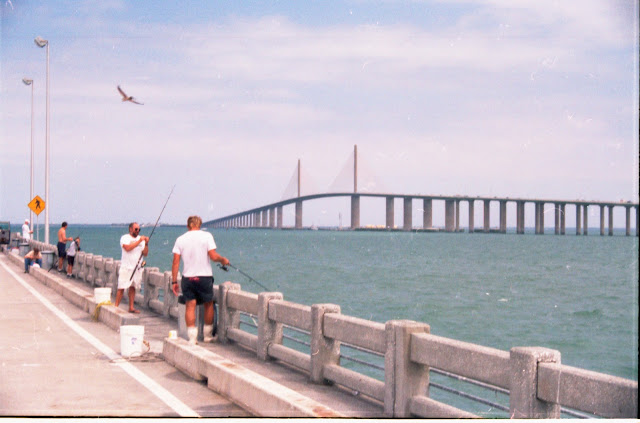 Florida is a good place to begin a study of cable-stayed bridges. The Sunshine Skyway is the world's longest bridge (5.5 miles) with a cable-stayed main span. It was built in 1987, replacing two steel cantilever bridges that were damaged by enough deadly ship collisions until a decision was made to replace them with a safer structure.

The center spans were later demolished with dynamite, which can be seen on a beautiful YouTube video. One of the damaged bridges is in the foreground of today's photo still in use as a fishing pier (for people and pelicans).

The new bridge was designed by Jean Muller and Eugene Figg. It was built to be extremely tall for it's time (193 ft) to allow the passage of container ships into Tampa Bay. The dolphins that surround the two towers were designed to resist the impact of a ship bigger than the ones that damaged the older bridges.

There's a lot of good information available on this handsome bridge and so we'll take another look at it tomorrow.

Beautiful picture of the bridge, thanks for posting.