A couple of miles north of the Navarro River is Salmon Creek and the deck truss bridge that crosses over it. The Salmon Creek Bridge is a 5-span, 685 ft long bridge with a 26 ft wide deck. The superstructure sits on two and four legged reinforced concrete towers. This bridge was built in 1950, improved in 1985, and now Caltrans is planning to replace it. 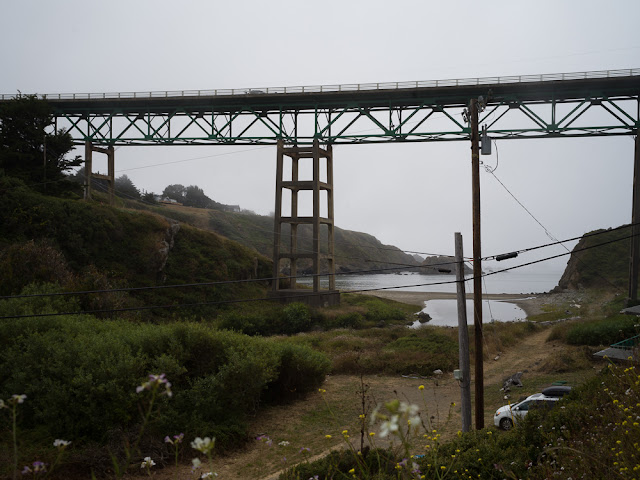 Among the reasons why Caltrans is considering replacing this bridge are: 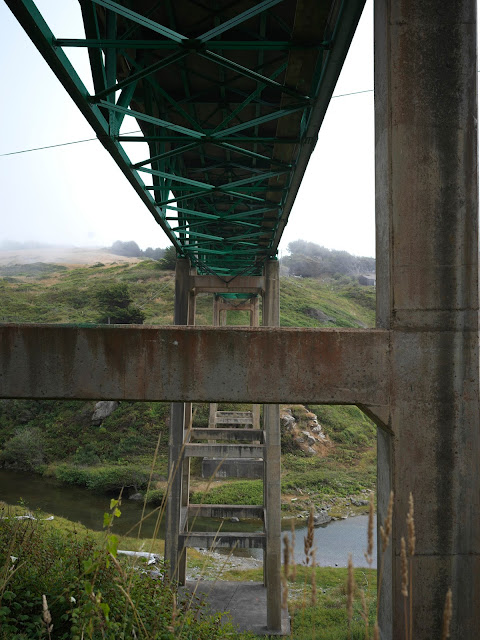 Caltrans builds very few steel bridges today. Part of this is due to the high maintenance costs of steel, but it is also because cast-in-place and precast bridges have become less expensive to build. Only when there is a good reason (usually related to quickly building over an obstacle) that steel is used. Also, Caltrans ductility-based seismic design philosophy favors reinforced concrete. Perhaps with the federal push for accelerated bridge construction steel may become more popular again. 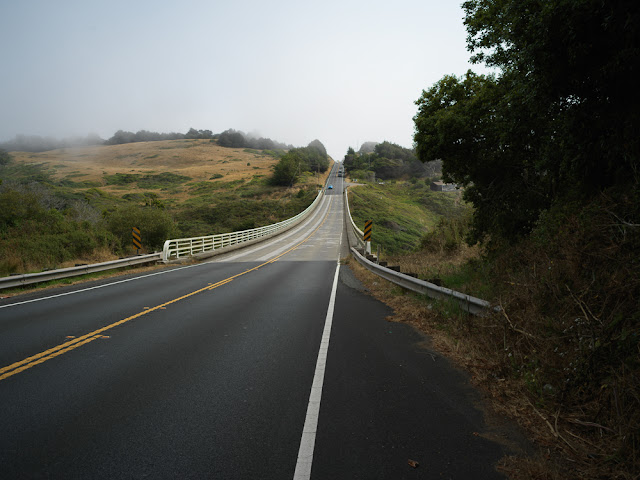 Caltrans performed a value analysis for replacing Salmon Creek (and the adjacent Albion River Bridge), held meetings with the community, and created designs for box arch (shown below), spandrel arch, and box girder bridges as options for bridge replacement. 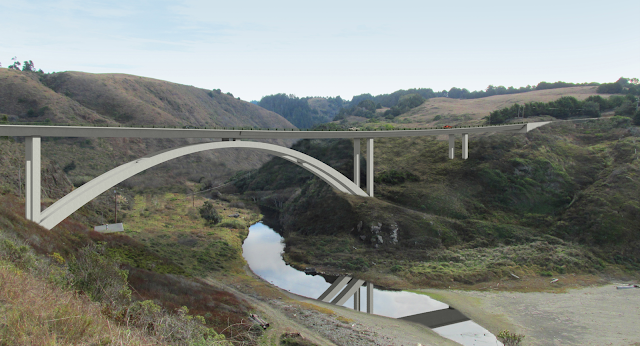 This work is licensed under a Creative Commons Attribution-NonCommercial-NoDerivatives 4.0 International License.
Posted by Mark Yashinsky at 9:00 AM 1 comment:

In Southern Mendocino County there are creeks and rivers emptying into the Pacific every few miles. I recently took a trip to photograph the bridges that carry Highway 1 over the mouths of these rivers. 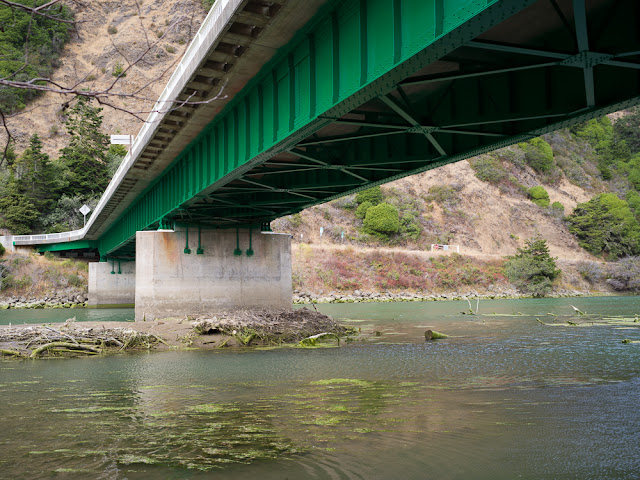 The Navarro River Bridge (10 0130) is the southernmost of these river crossings. It is a two span continuous steel girder bridge (with short approach spans) on concrete piers (and pile extensions). It was built in 1949 and rehabilitated in 1985. It looks like the rehabilitation included a seismic retrofit to anchor the girders to the piers. 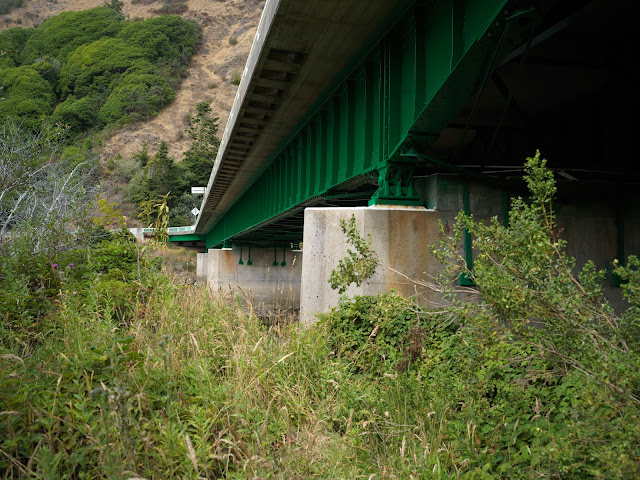 The Navarro River Bridge is where State Route 128 intersects and becomes part of Highway 1 about one mile from the coast (see photo below). 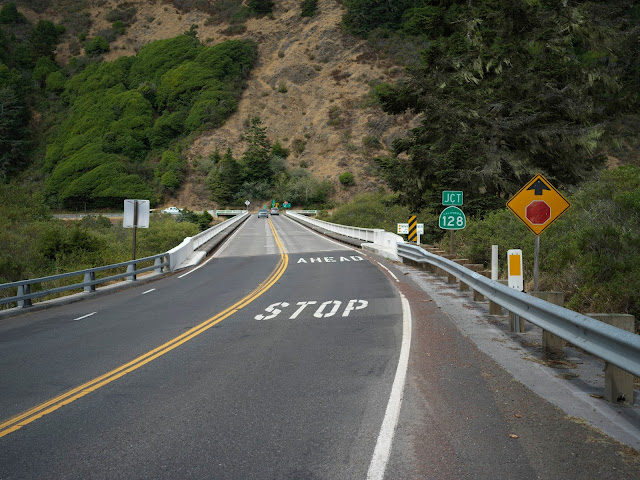 One hundred years ago, the town of Wendling was located at the mouth of the Navarro River. There was a port, a railroad siding, a lumber mill, and a hotel for the sailors who anchored at the river's mouth to load their schooners with redwood cut from the surrounding forest. A truss bridge was built near the mouth of the river to support the community (see photo below). 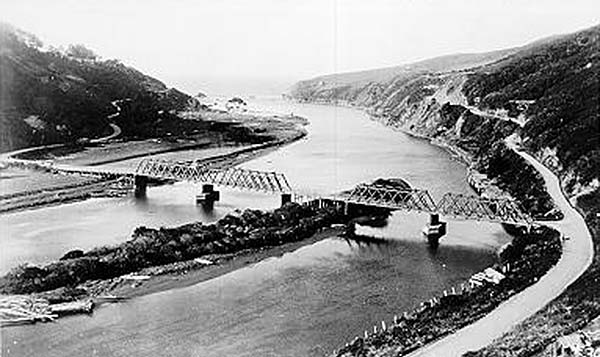 Today, there isn't anything left from the bridge or the town, just a sandy beach. 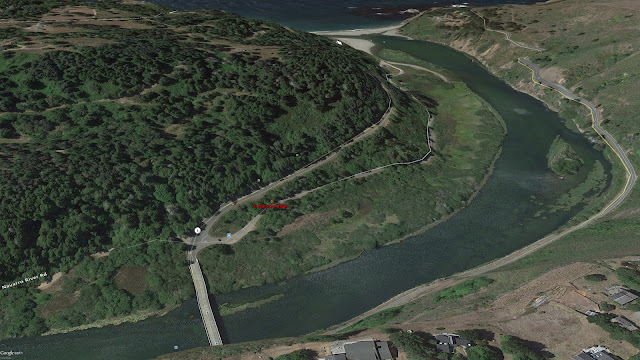 The last bridge I photographed over the Willamette River was the Sellwood Bridge, which opened in 2017. It's a 1,976 ft long bridge with three steel arch spans over the river. It was designed by T. Y. Lin International, who also designed last week's Tilikum Crossing.

The new bridge replaced a deck truss structure that was designed by Gustav Lindenthal in 1925. The contractor (Slayden/Sundt Joint Venture) moved the old superstructure from its concrete piers onto temporary steel towers so people could use it while the new bridge was being built (see photo below courtesy of KATU). 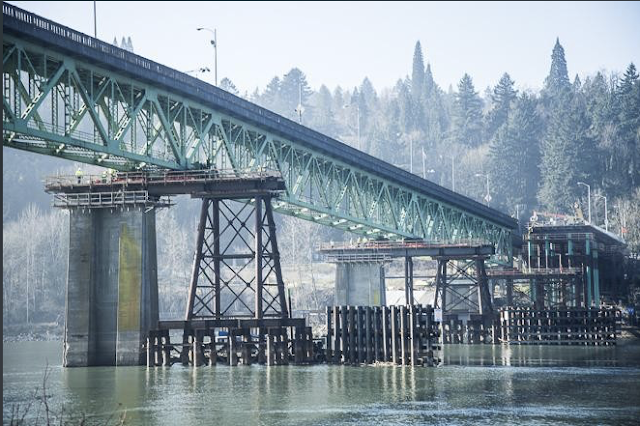 An interesting detail on the new bridge is the concrete arch springings that project out of the caissons and connect to the steel arch ribs (see photo below). The deck is supported by the spandrel columns on the arches and by big steel piers directly over the caissons. 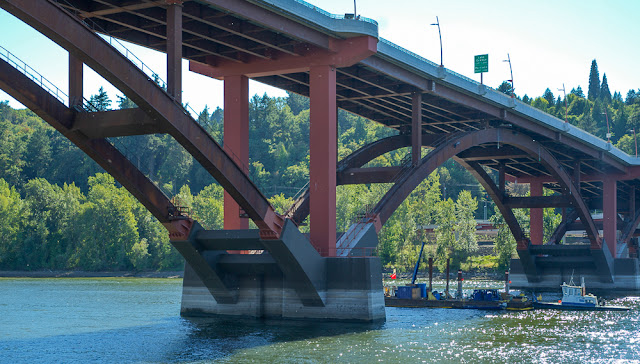 The concrete springings are repeated at the ends of the river spans where they are buried deep into the ground to resist service loads and the occasion earthquake (see photo below). 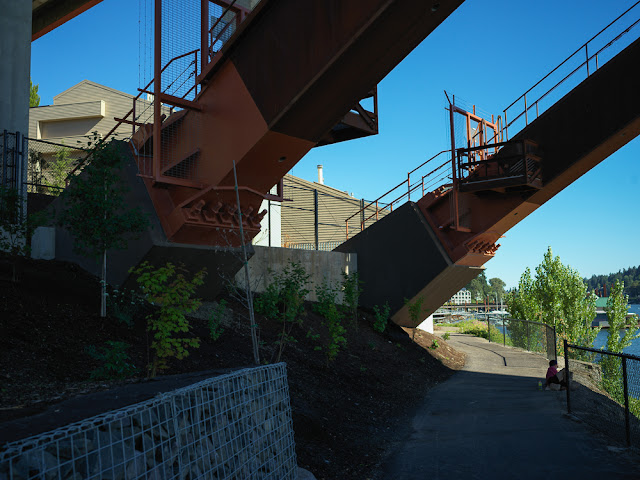 The new bridge has a 63' to 93' wide deck with two vehicle lanes, two 6.5 ft wide shoulder/bike lanes, and two 12 foot wide sidewalks. There is also a middle lane to allow for future light rail tracks (see photo below). The bridge  owner is Multnomah County. 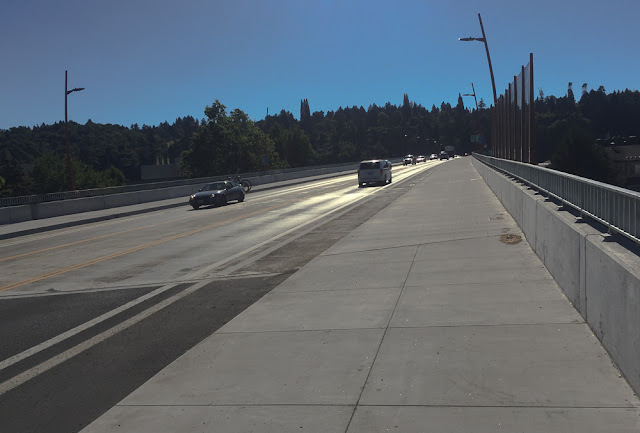 The city of Portland has a very good public transportation system. Therefore, it's not surprising that their first new bridge in 40 years across the Willamette River is the Tilikum Crossing, a multi-modal bridge that doesn't carry cars. 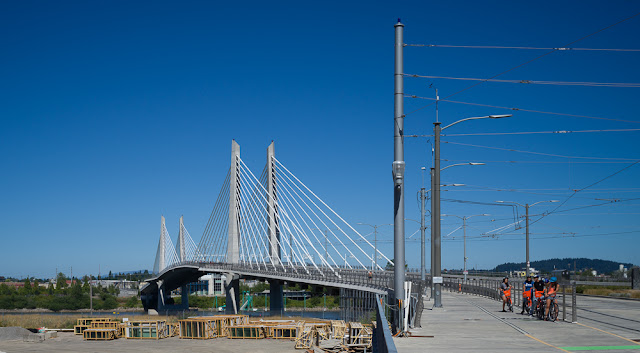 The architect of the bridge was Donald MacDonald and the engineer was TYLin International, the same team that designed California's East Bay Crossing. This 1720 ft long bridge (with a 780 ft long main span) is the longest 'no-car' bridge in the United States. 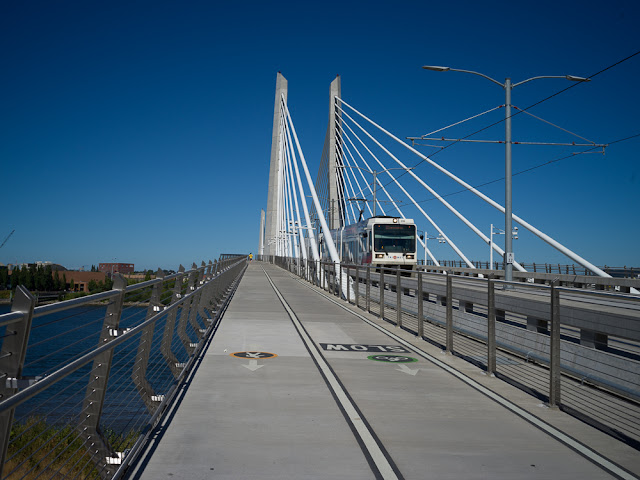 The Tilikum crossing is a cable-stayed bridge with two short 'H' towers that make the structure resemble an extrados bridge (a bridge where the cables act as additional prestressing tendons). The cables on the Tilikum Bridge are continuous through the towers, which is called a 'Freyssinet multi-tube saddle design.' 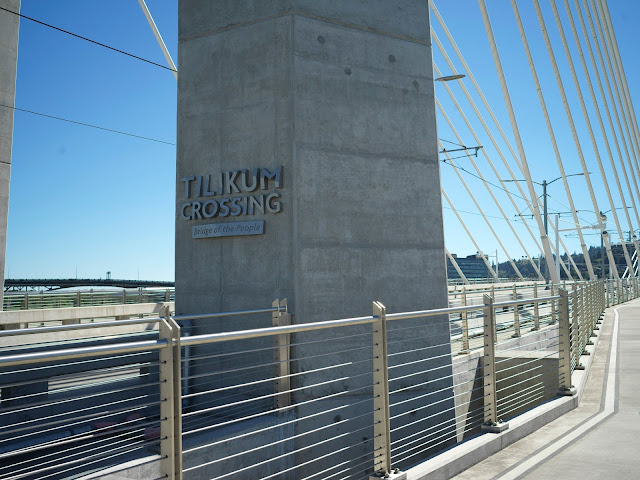 Tilikum is a Chinook word, which means 'The People' and so this bridge (owned by the Trimet Transit System) with its bike lanes and train tracks, is meant to provide transportation alternatives to all of the people and neighborhoods of Portland. 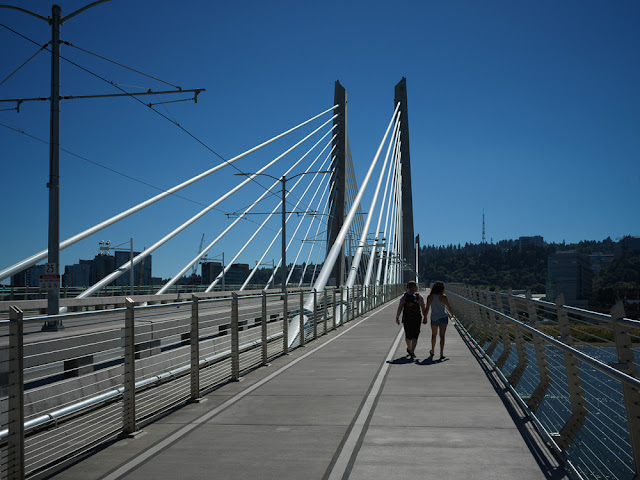 The Tilikum Crossing isn't as dramatic looking as MacDonald's and TYLin's East Bay Crossing. However, this is a community-friendly structure that goes a long way toward connecting all the people in the metropolitan Portland area. The cable arrangement at each tower is meant to resemble the shape of nearby Mt Hood, which can be seen if you look closely at the right side of the top photo.