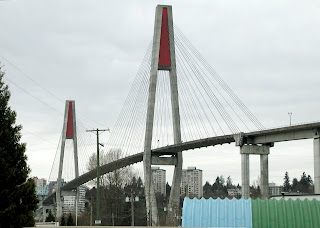 We previously looked at the Skytrain Bridge on October 6th of 2009. It has the distinction of being the world's longest cable-stayed light-rail bridge, with a 1115 ft long main span and 2020 ft total length. The prestressed concrete superstructure carries two sets of light rail tracks across the Fraser River.

On the Buckland and Taylor Website, they mentioned that they were underbid by 0.5% on the project but later came in to evaluate whether the bridge was capable of carrying heavier trains. Information on this bridge is limited but I noticed that some websites say the bridge was completed in 1986 (in time for Expo86) while others say the bridge wasn't completed until 1990. Also I saw a couple of reports stating that chunks of concrete were falling from the bridge but that the bridge owner (Translink) assured reporters that there was no cause for alarm.