Just as San Lorenzo Creek formed Castro Valley in central Alameda County, Alameda Creek formed Niles Canyon in southern Alameda County. This area is has a relatively long history. The First Transcontinental Railroad went through the canyon on its way to San Francisco. The Sunol Aqueduct supplied water to the City. 'El Camino Viejo a Los Angeles' went through the canyon. Many of these lifelines continue to serve the area. The road to Los Angeles has become scenic State Route 84. The tracks of the Transcontinental Railroad are still used by the Altamont Commuter Express and by the Niles Canyon Railway. The Sunol Water Temple was recently renovated. 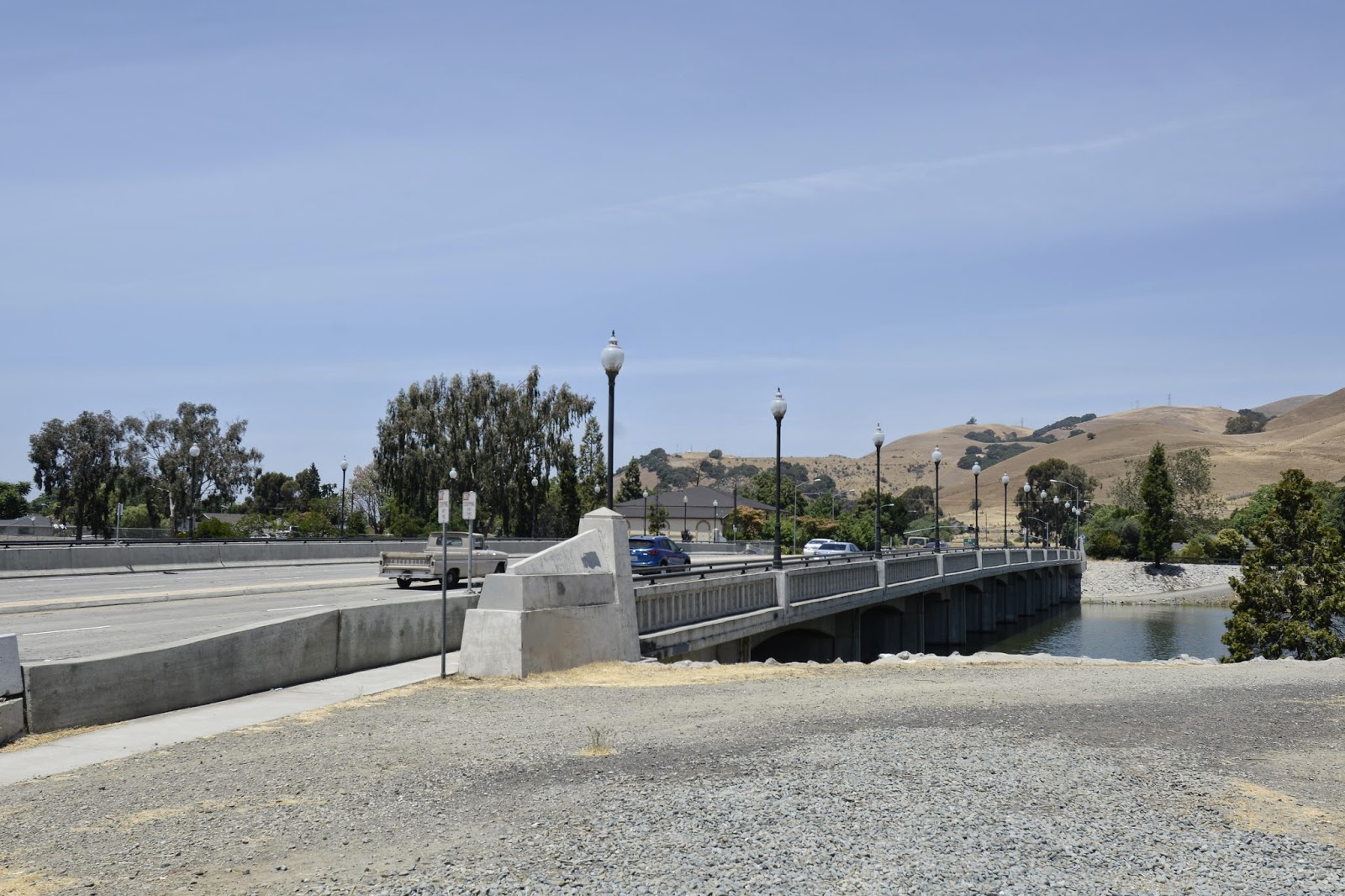 Niles Canyon ends in the City of Fremont where Alameda Creek is crossed by several roadway and railway bridges. The Alameda Creek Bridge (33 0003) is a haunched concrete T girder bridge that carries SR 238 (Mission Blvd) over the creek. The bridge is 433 ft long, 85 ft wide, and was built in 1937. Just downstream of the bridge is a railway bridge and a dam (see photo below). 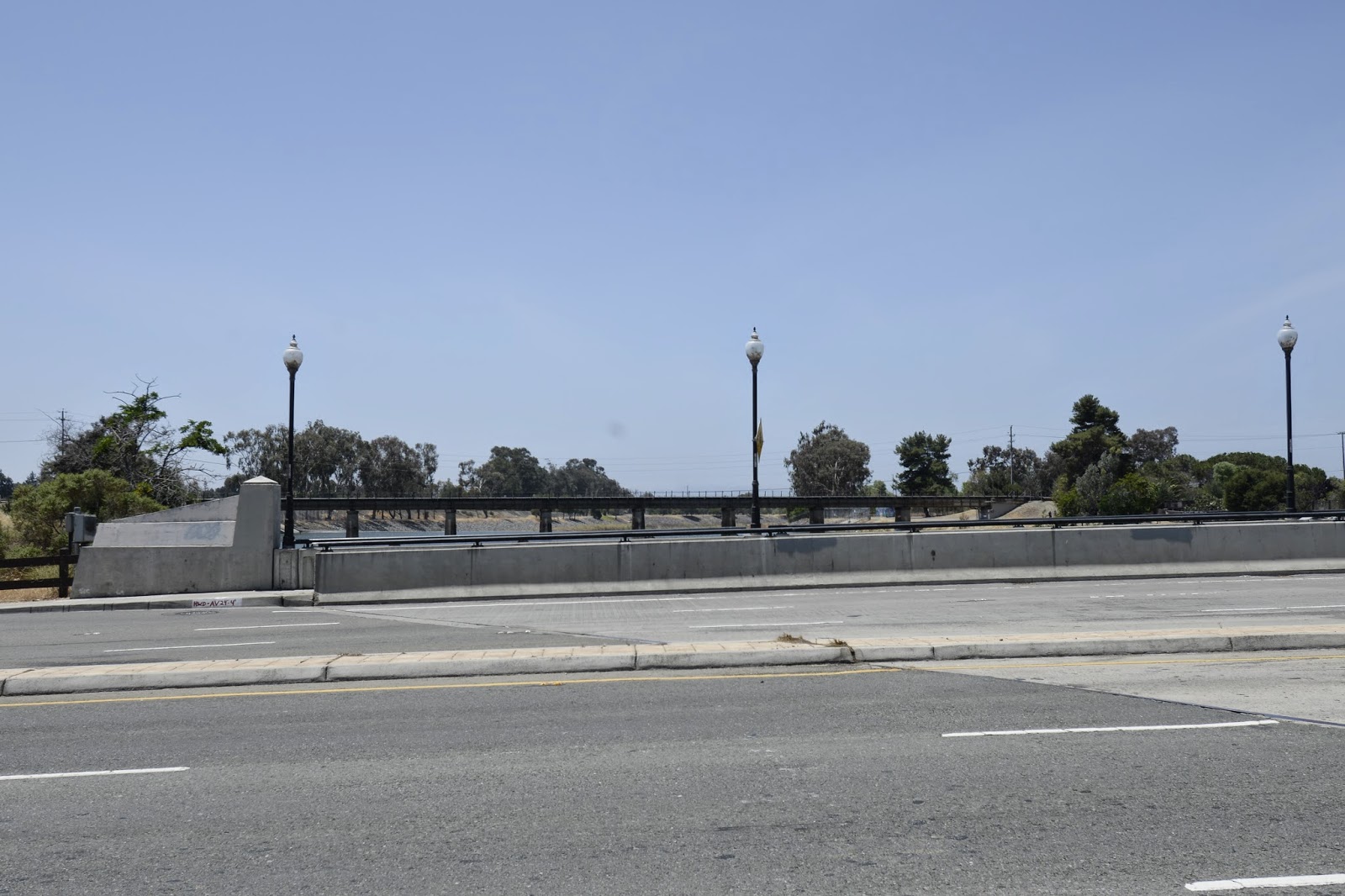 Alameda County, California Bridges: State Route 238 Bridge across Alameda Creek by Mark Yashinsky is licensed under a Creative Commons Attribution-NonCommercial-NoDerivatives 4.0 International License.
Posted by Mark Yashinsky at 9:00 AM No comments:

The San Mateo- Hayward Bridge (35 0054) includes a 37 span steel orthotropic structure on the west end of the Bay and a long concrete trestle structure on the east end of the Bay. The whole bridge got a seismic retrofit in the late 1990s and these photos are from when I went out to see the work on the steel portion. Concrete columns were wrapped in steel casings and big 'dog bones' with more piles were wrapped around the foundations. The concrete trestle was also retrofit and it was widened to six lanes in 2003 (to match the west half of the bridge). 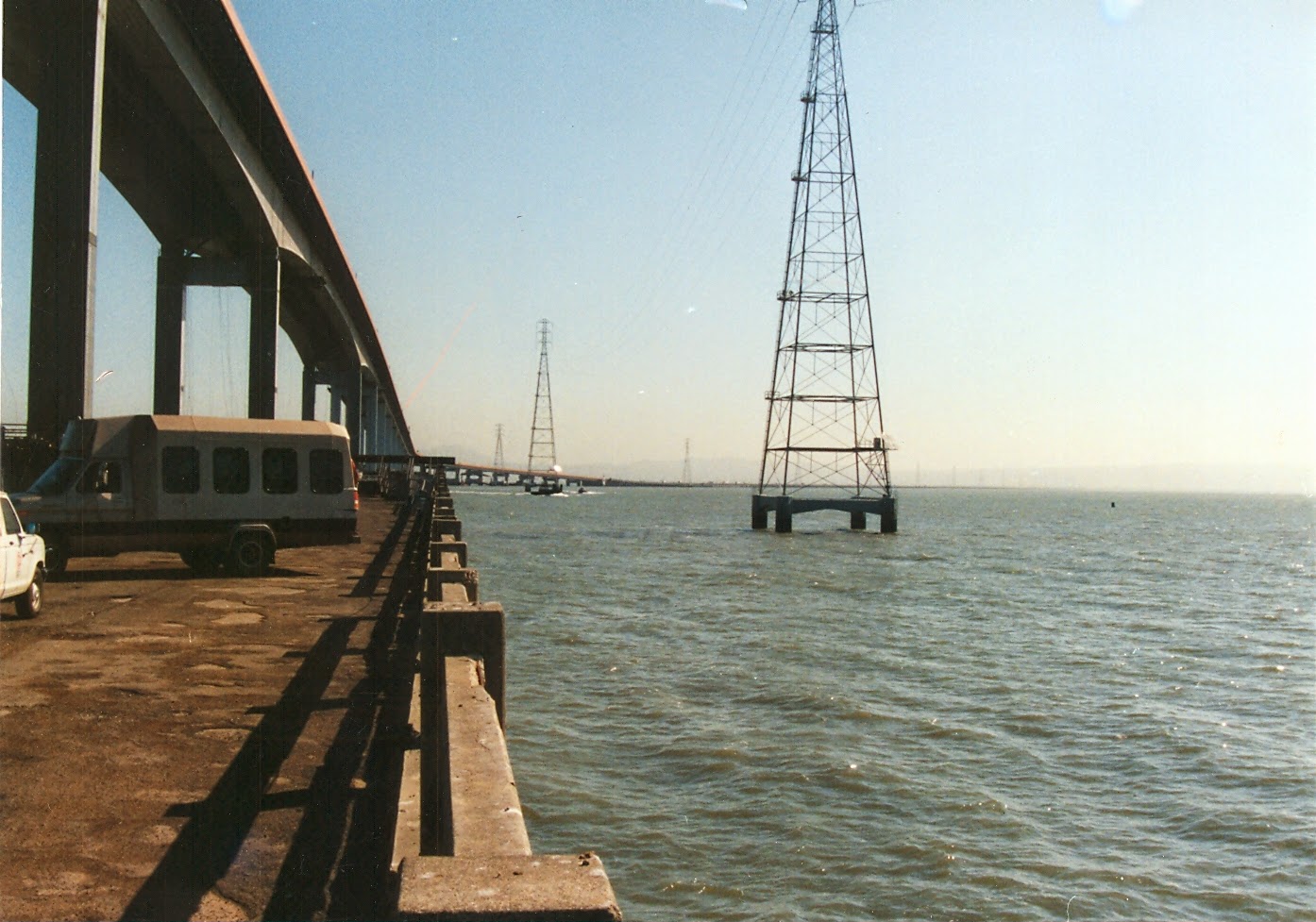 The problem with railroad bridges is unless they are near a road (or you have a boat) they can be difficult to photograph. There are two Baltimore through truss swing railroad bridges at the south end of San Francisco Bay that were built in 1910 and abandoned in 1982. The one shown above crosses San Francisco Bay and the one below is in the Newark Slough Wildlife Center. I was unable to get very close and had to use a telephoto lens to photograph these bridges. 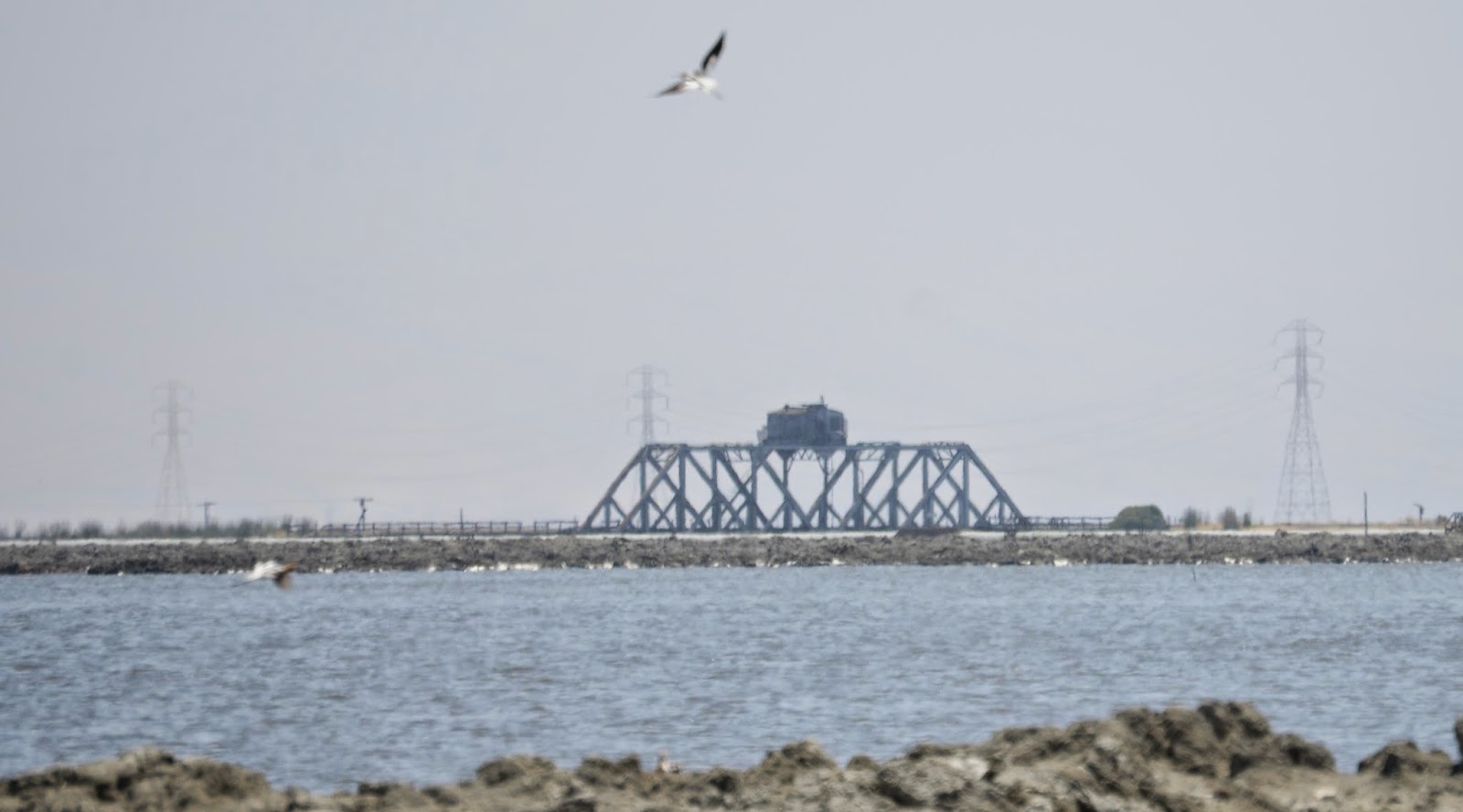 Alameda County, California Bridges: Caltrain Swing Bridges in Newark by Mark Yashinsky is licensed under a Creative Commons Attribution-NonCommercial-NoDerivatives 4.0 International License.
Posted by Mark Yashinsky at 9:00 AM No comments:

We've left the dry grasslands of Alameda's eastern border for the salt marshes along its western border. South San Francisco Bay is crossed by the San Mateo Bridge and today's Dumbarton Bridge along the western border of Alameda County.  I'm very familiar with Dumbarton because I was one of the minions who modeled its piers for the seismic retrofit that was recently completed. 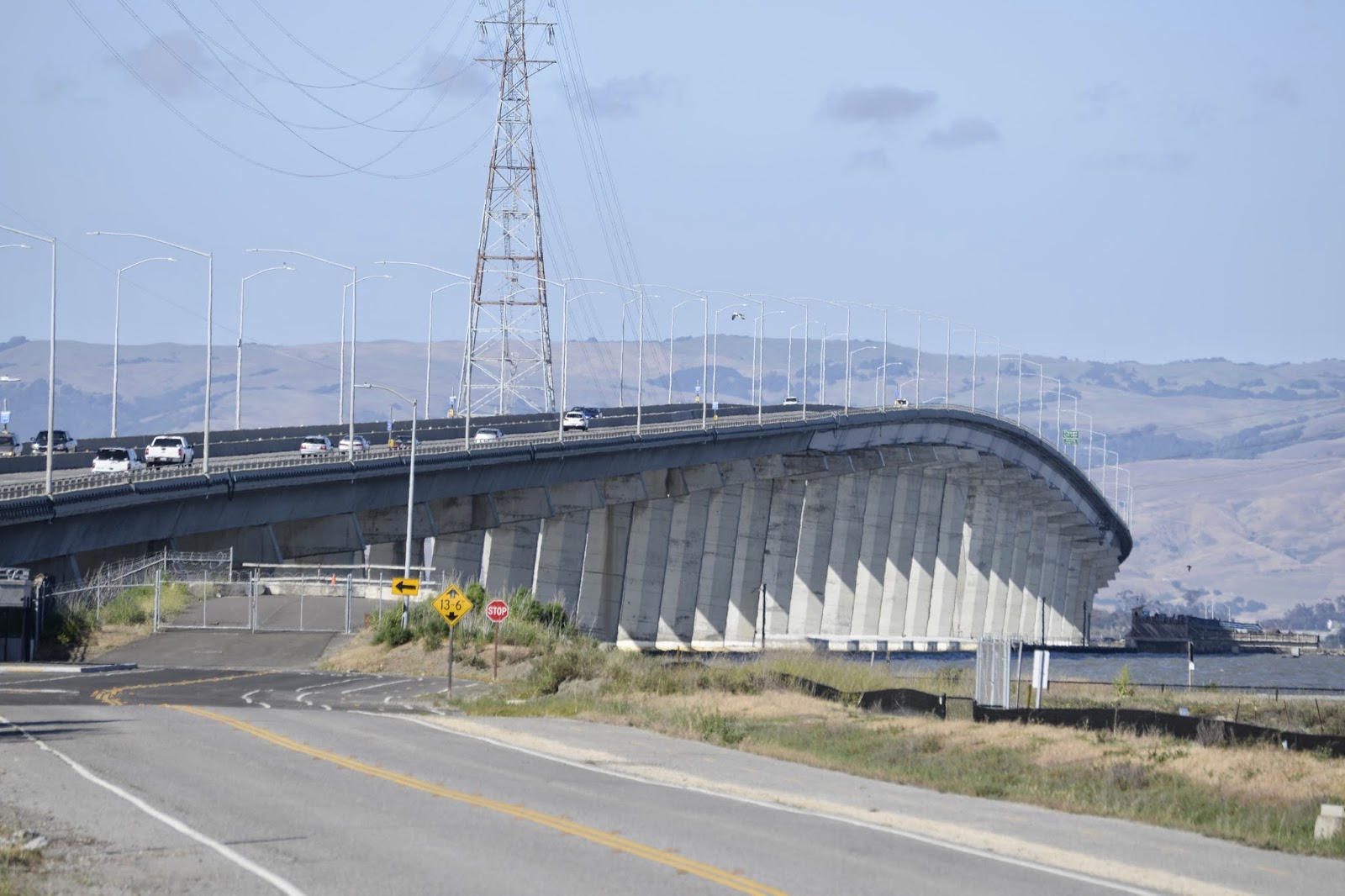 The photo above was taken from the west end of the bridge in San Mateo County. Dumbarton Bridge (35 0038) is a continuous steel box girder bridge built in 1981. It's on the south end of San Francisco Bay and it's the shortest of the Bay bridges (at 1.4 miles). Stiff piers at the ends and tall piers in the middle makes the stiffer piers carry most of the lateral load during earthquakes. Since the bridge was designed in the 1970s we originally hoped that it would be okay for earthquakes, but we ended up isolating the steel superstructure to reduce the forces to the substructure. 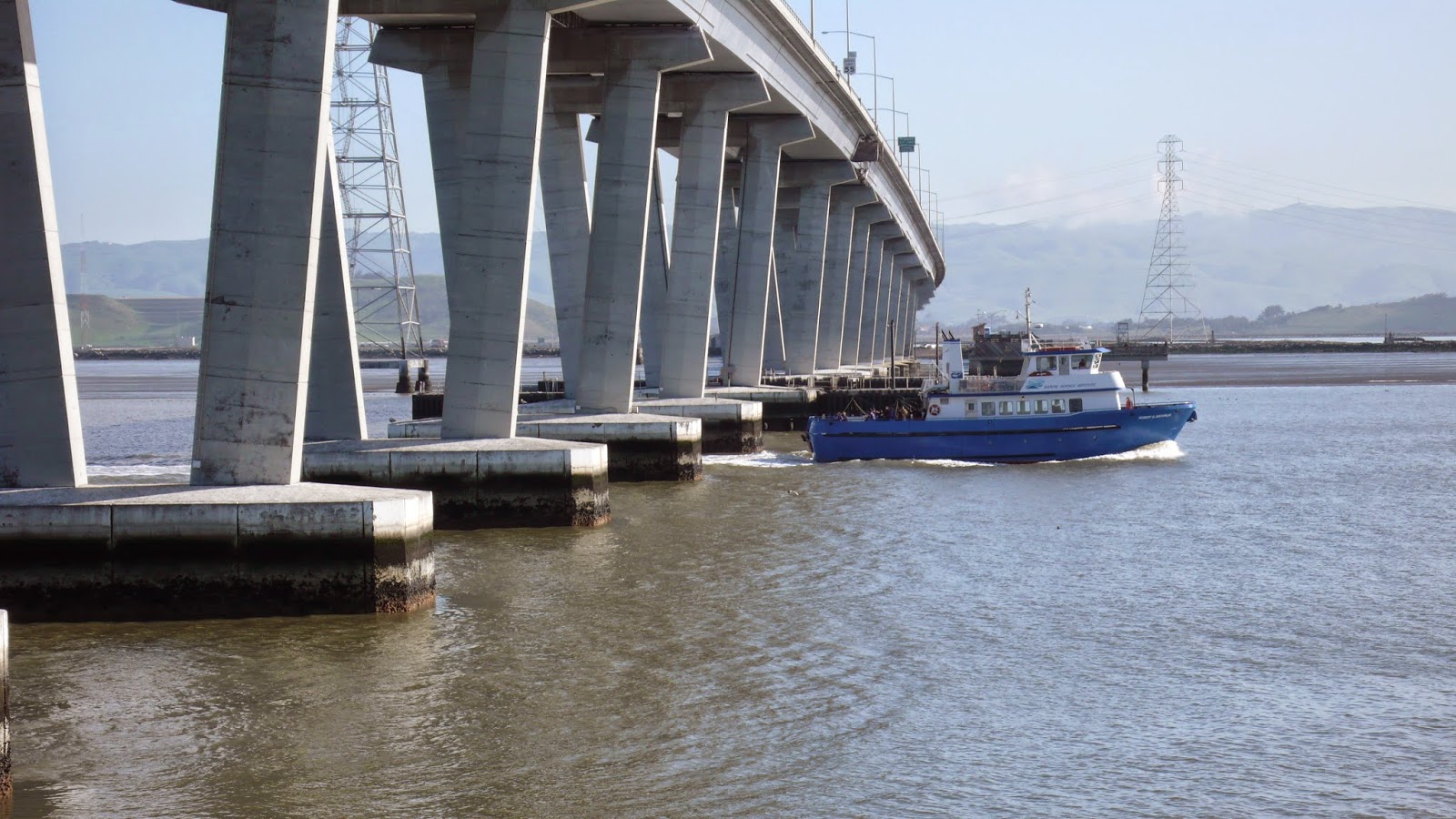 Alameda County, California Bridges: Dumbarton Bridge across San Francisco Bay by Mark Yashinsky is licensed under a Creative Commons Attribution-NonCommercial-NoDerivatives 4.0 International License.
Posted by Mark Yashinsky at 9:00 AM No comments: 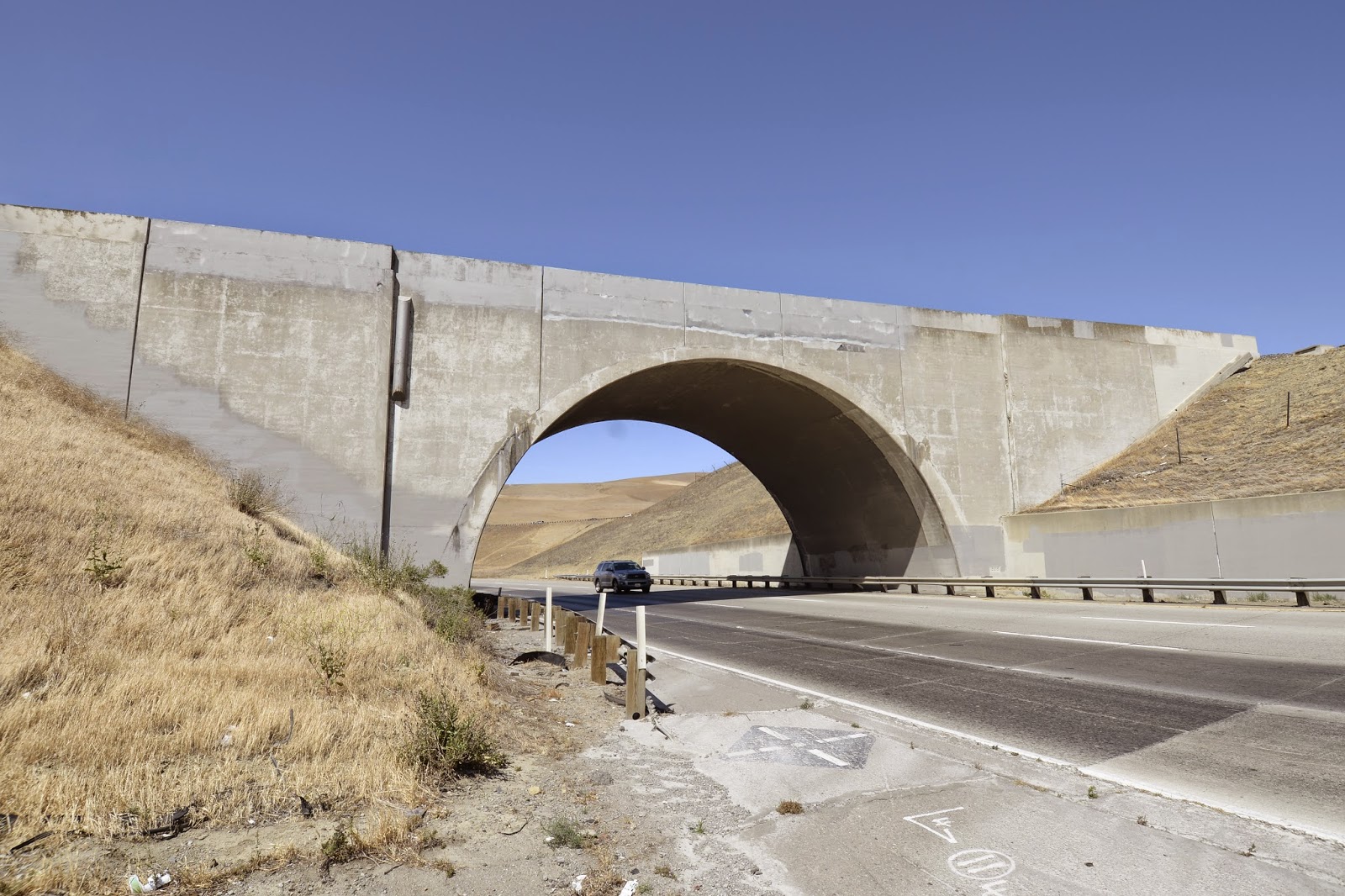 This bridge must have been quite impressive in a Frank Lloyd Wright kind of way when it was first built. It looks like Caltrans is continuing to cover up the graffitti as soon as it goes up. Most of the joints are coming apart and so I imagine at some point it will have to be repaired. 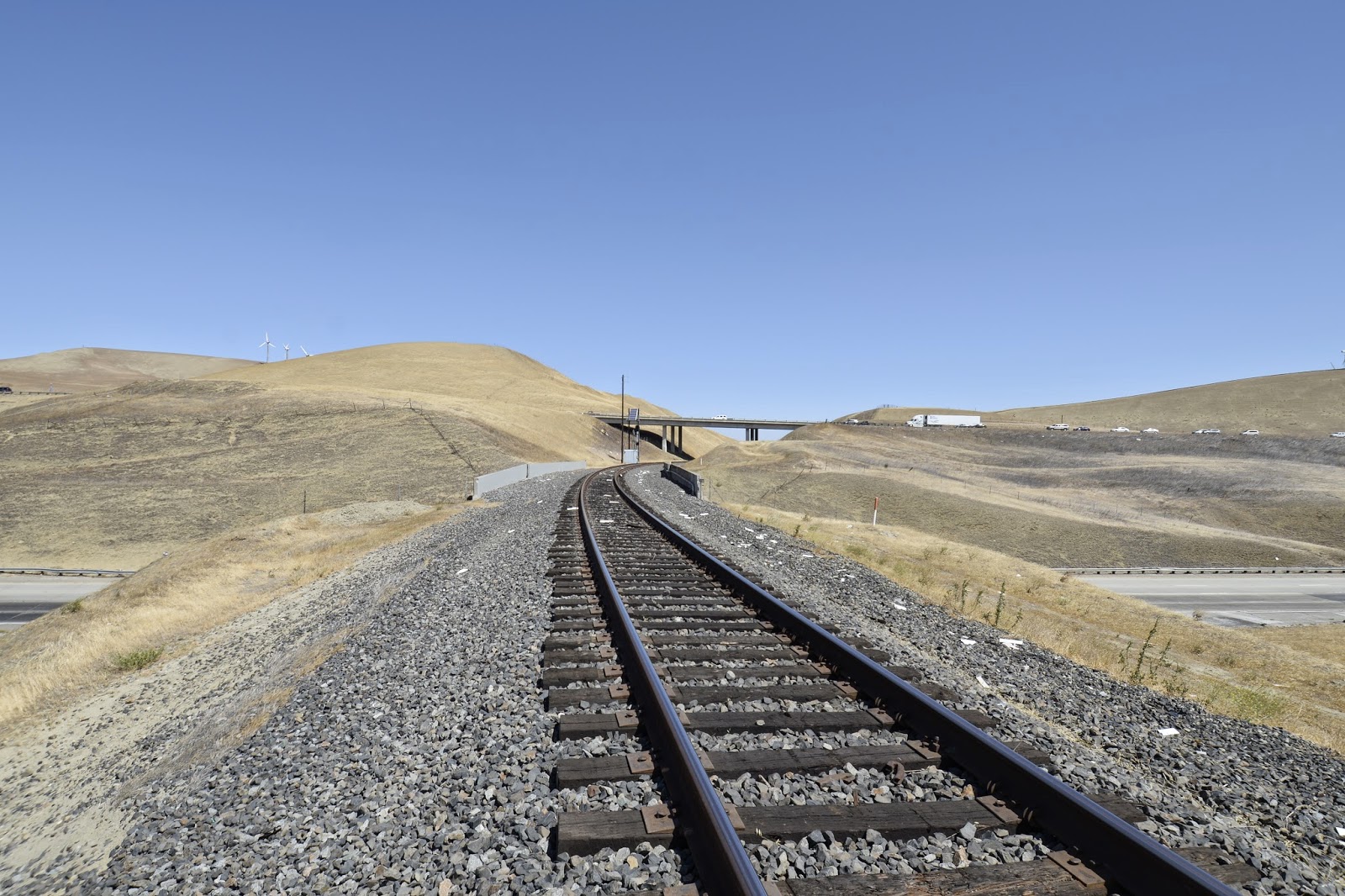 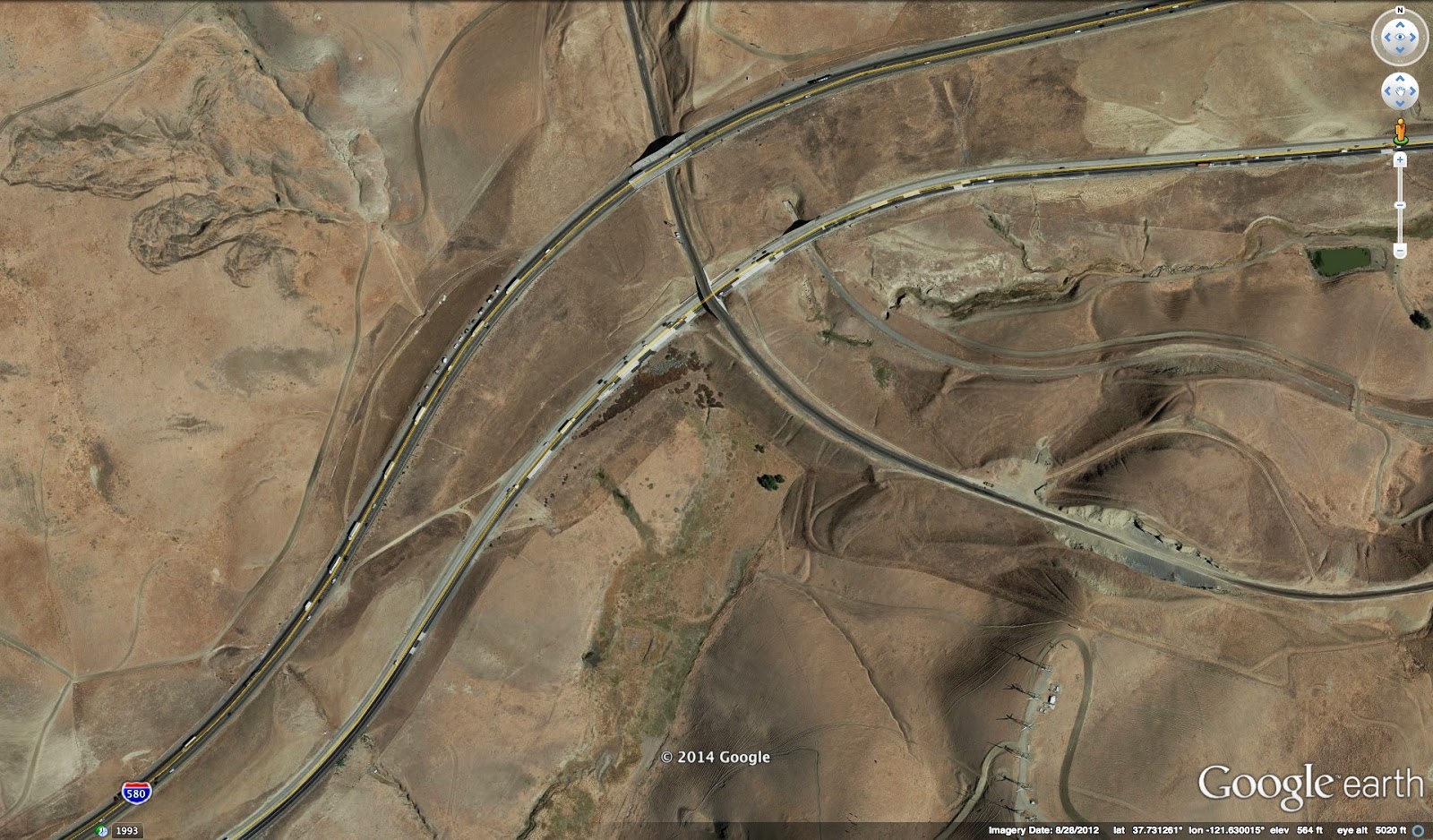 Alameda County, California Bridges: Stone Cut Underpass across Eastbound I-580 by Mark Yashinsky is licensed under a Creative Commons Attribution-NonCommercial-NoDerivatives 4.0 International License.
Posted by Mark Yashinsky at 9:00 AM No comments:

There are several mountain passes in Alameda County. The Altamont Pass is so steep that my V8 Ford F150 had trouble staying at 65 mph climbing over the pass from Stockton. Railroad companies must have had great difficulty designing their tracks to go over this pass at a 3% grade.
The Altamont Pass Road Underpass (33C0013) was originally owned by Union Pacific but has found increased usage as part of the Altamont Corridor Express from Stockton to San Jose. I read that they are planning to eventually make this corridor part of a high speed rail project from Las Vegas to San Jose. 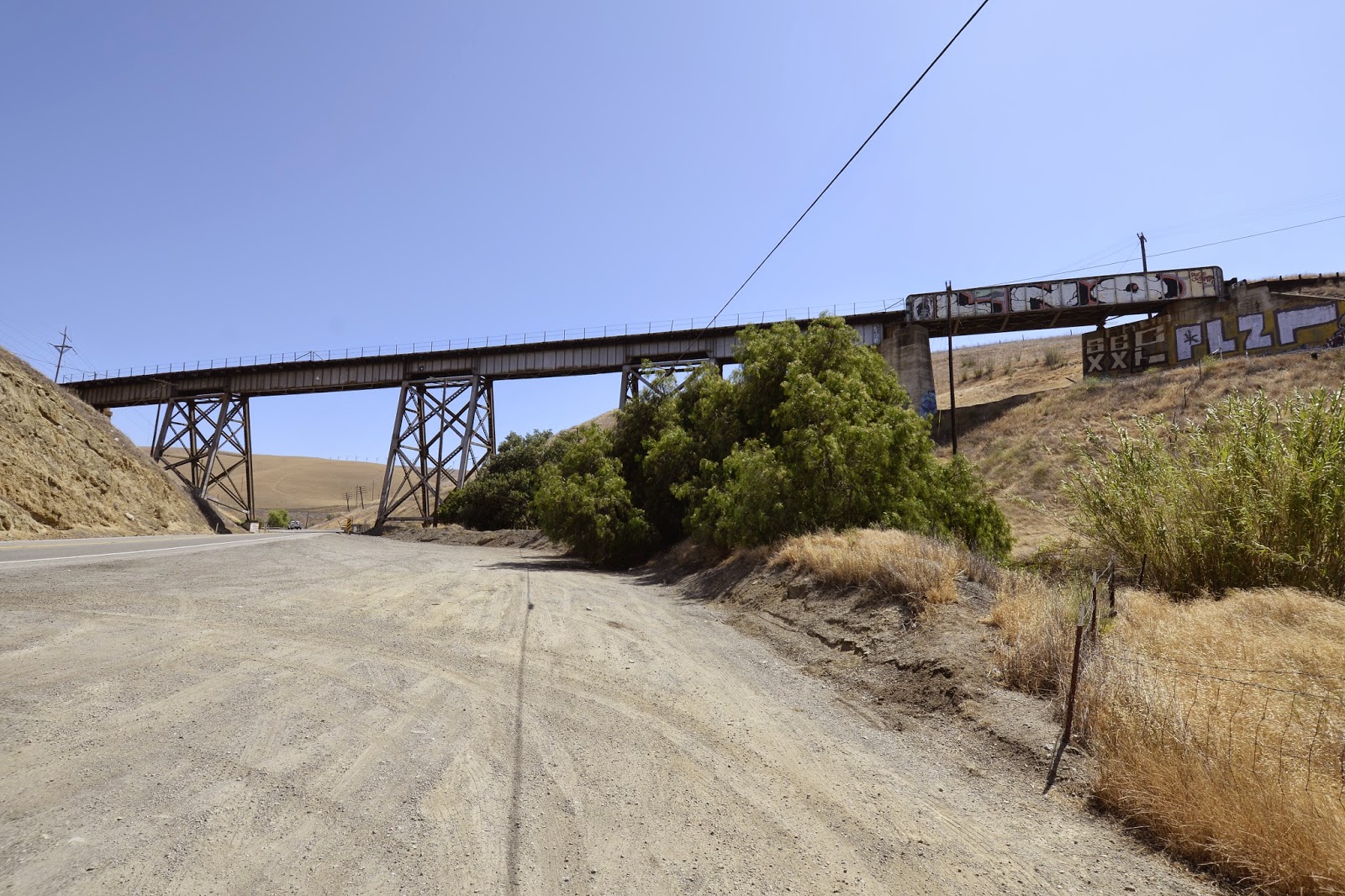 The bridge is next to a dirt bike track. I was amazed at how the young riders could accelerate on the little hills and fly into the air for what seemed like 10 seconds. Someone has done a nice job painting the through girder span and south abutment on this 425 ft long steel trestle bridge. 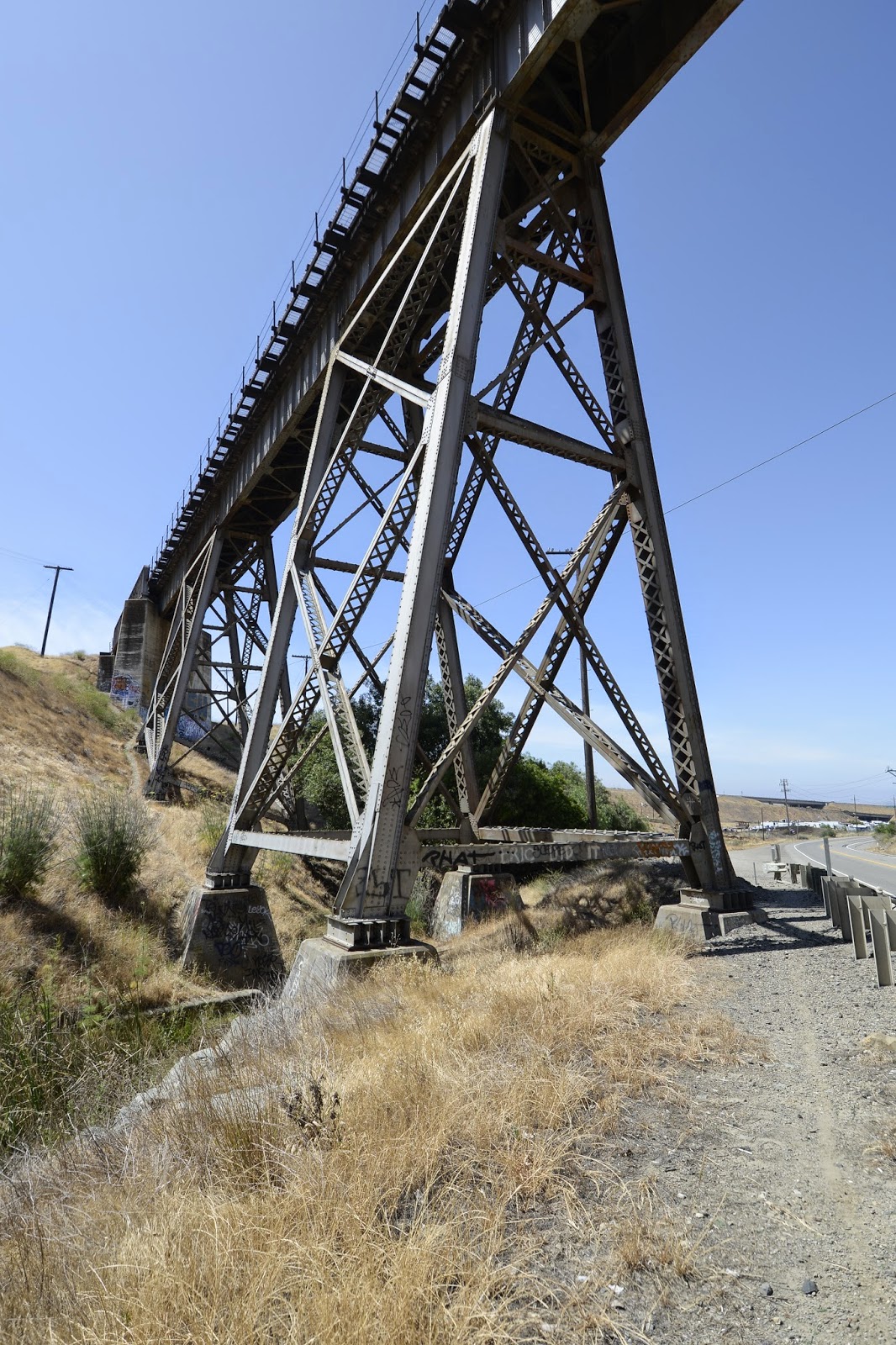 The bridge was constructed in 1908 (and improved in 1919) The towers are assembled with rivets. The bridge is composed of eight spans including the shorter girder spans between the tower legs. The bridge crosses over Altamont Pass Road and Altamont Creek. It took me a while to realize the creek passes between the legs of one of the steel towers.

Castro Valley was created by the waters of San Leandro Creek and its tributaries. It was first colonized by Europeans as part of the land granted to Mission San Jose in 1797.  I-580 turns to the east at the 238-580 Interchange and then crosses over Castro Valley. In the photo above we are looking at I-580 over the Five Canyon Parkway Bridge (33C0445). It is curved 3 span continuous concrete box girder bridge built in 1992 across San Lorenzo Creek. In the next few days we are going to study bridges along the I-580 corridor near the east Alameda County border.

We've been following the San Lorenzo Creek eastward through Castro Valley for the last few days. At today's location there are two similar closed spandrel arch bridges about 100 yards apart crossing the creek. In the photo above is Old Dublin Road Bridge (33C0023) across San Lorenzo Creek. It's a 41 ft long bridge built in 1927. 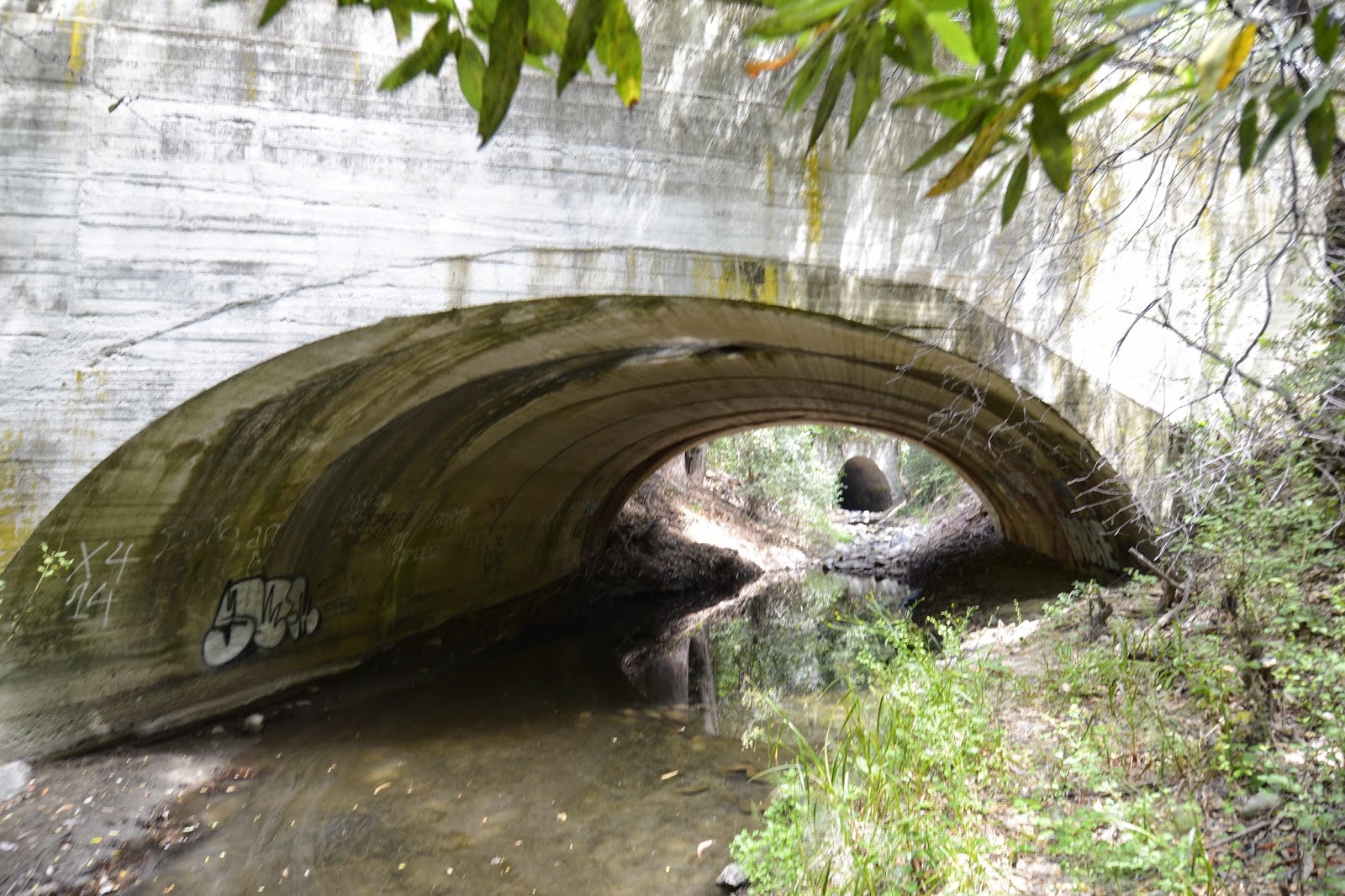 In the next photo we can see the other arch bridge in the distance crossing the creek. I walked over to it but I couldn't get close enough to determine what road (if any) it carried. My best guess is that it's a long culvert carrying I-580 over the creek. 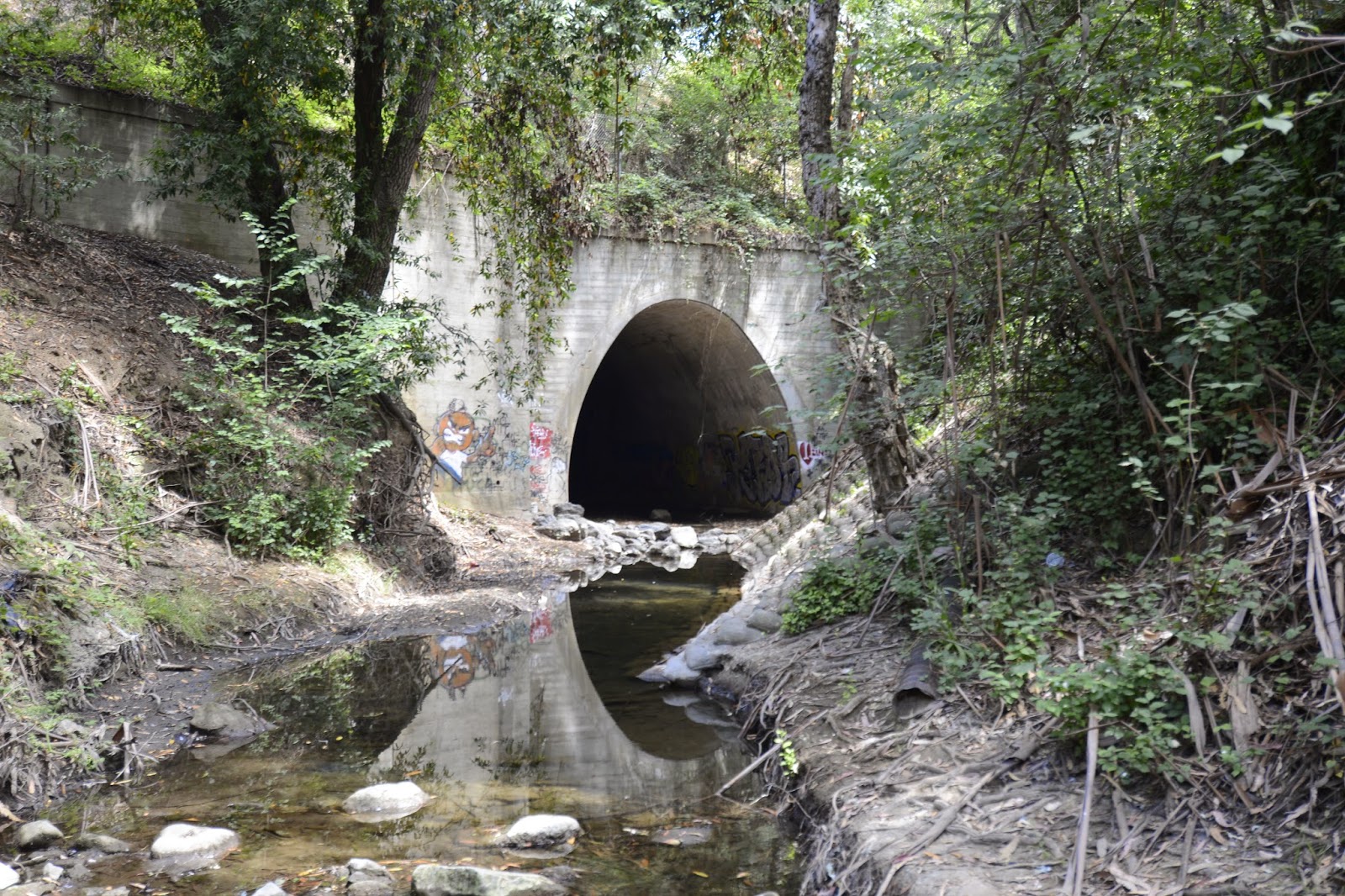 Just east of yesterday's Grove Way Bridge is the Center Street Bridge (33C0160) across San Lorenzo Creek. Although this bridge is older than Grove Street, it's not as unique, which may explain why it isn't registered as a historic place. There is no record of who designed it. It's just another open spandrel arch concrete bridge supporting a T girder superstructure. 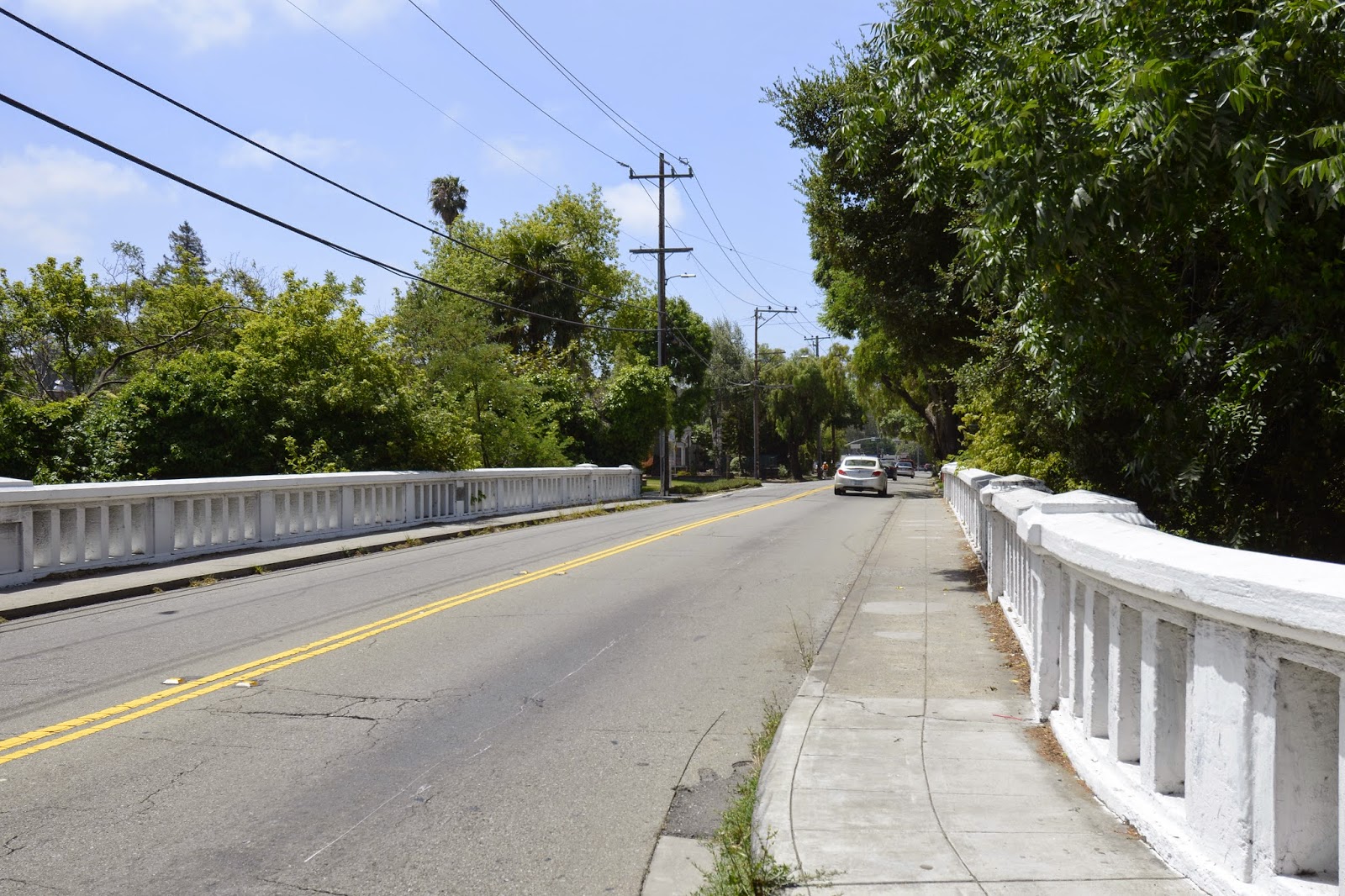 The Center Street Bridge does have a nice balustrade railing that was recently painted. The bridge was built in 1913, and it's 120 ft long, but only 24 ft wide. It includes sidewalks on both sides and an asphalt covered deck, which increased its weight and maybe produced the cracks in the pavement.

Just south of the 580-238 Interchange in the town of Hayward (in the Castro Valley) is a concrete through arch bridge over the San Lorenzo River. The Grove Way Bridge (33C0205) was designed by P.A. Haviland and built by Thomas B. Russell in 1915. This bridge is eligible for the National Register of Historic Places. 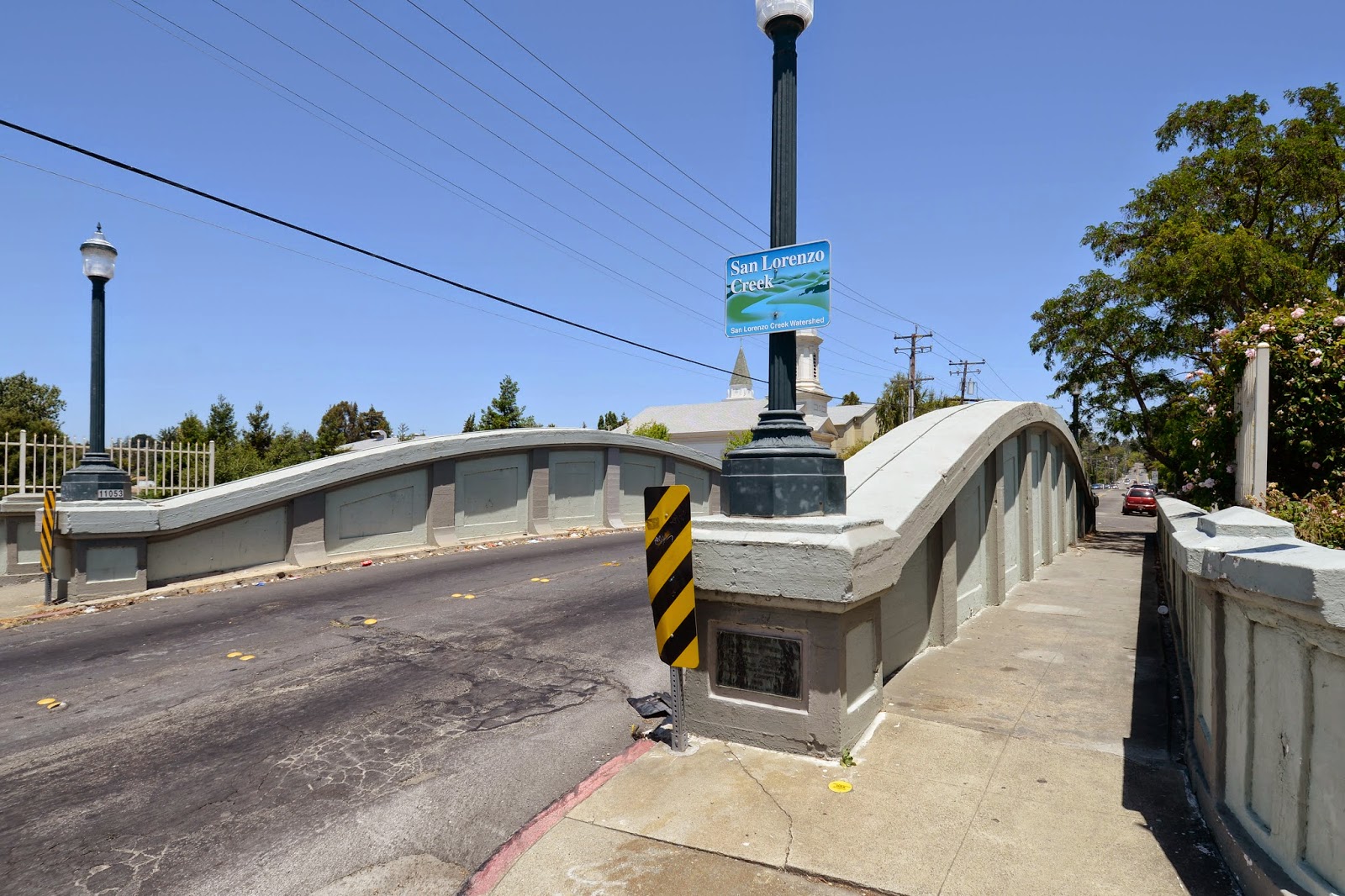 The Grove Street Bridge is a 63 ft long single span structure with a 25 ft wide deck that squeezes in two traffic lanes, two arch ribs, and a sidewalk. The arches have thin concrete ribs that flatten out at the ends, which doesn't seem very effective for arching and so I imagine these members act more like girders. 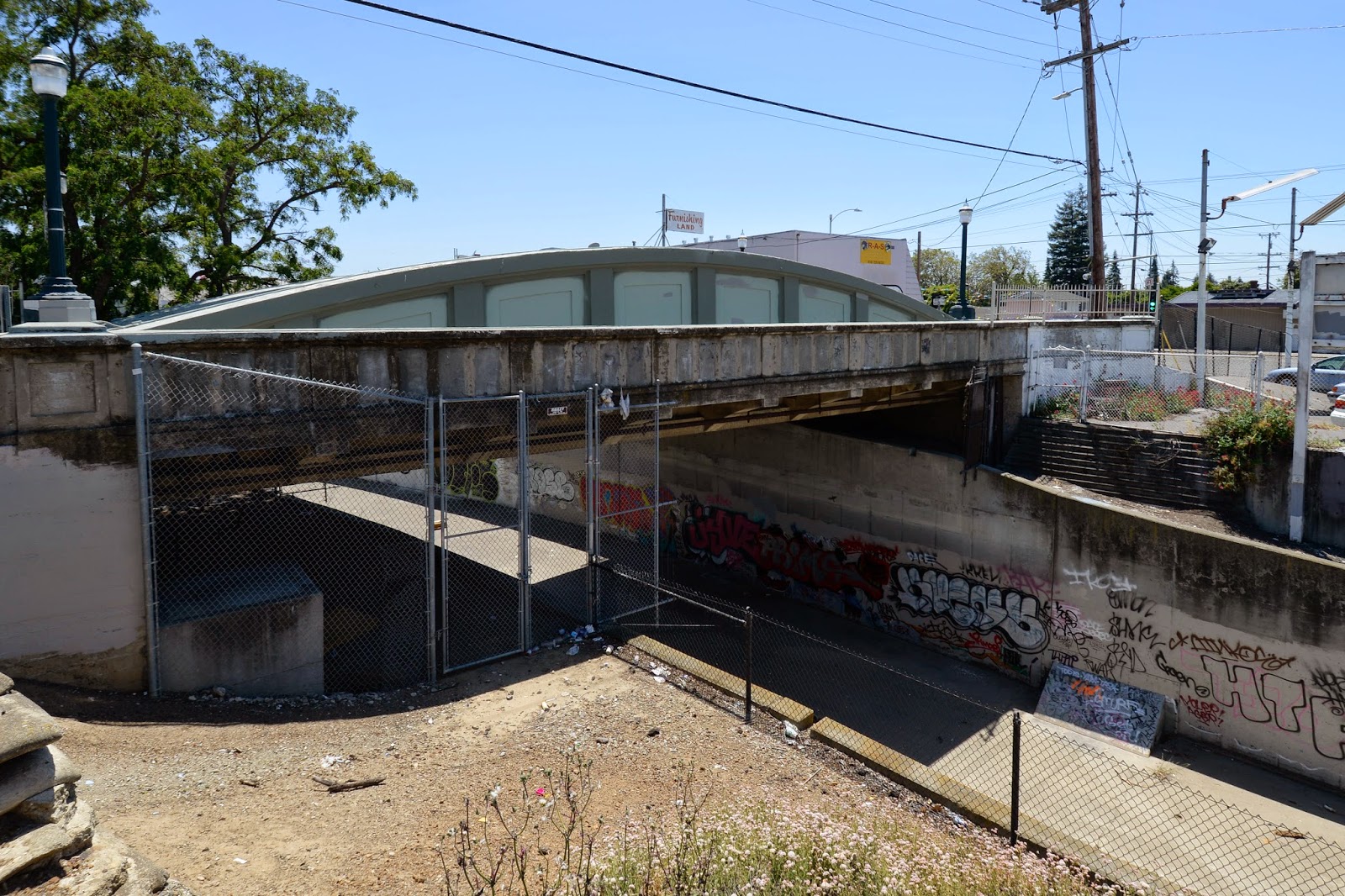 Another interchange, the I-580 to I-80 in Oakland. The East Bay Viaduct (33 0611L) is the tall connector shown above that goes over all the other bridges. It's a rare (in California) 51 span steel girder bridge, which was chosen so they could quickly assemble the superstructure over existing expressways. It was built in 1998 as part of the replacement for the damaged Cypress Expressway. 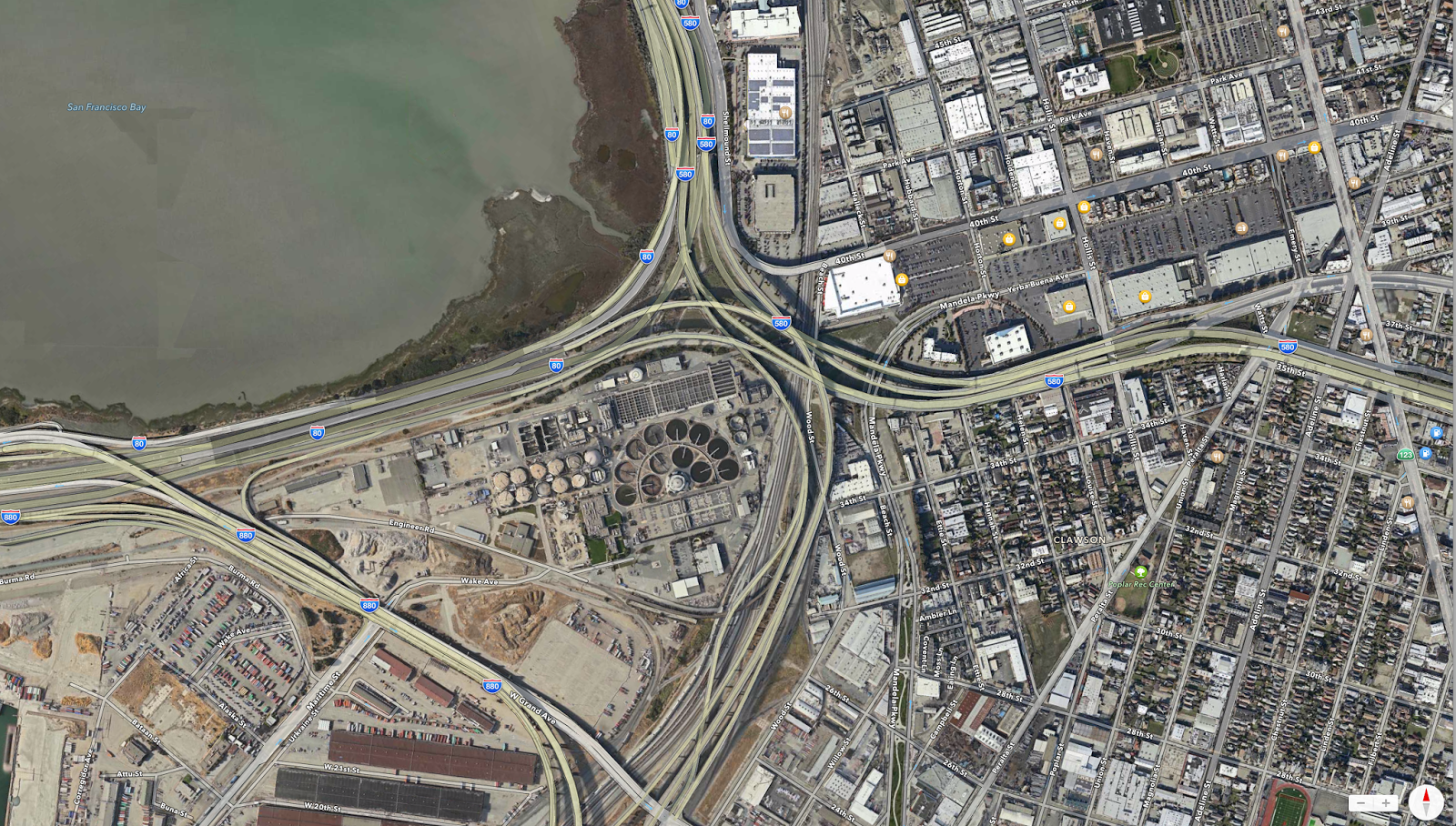 In the photo above the E580-S238 Connector OC (33 0436F) can be seen straddling over the W580-N238 Connector Sep. (33 0525G). Today's bridge uses outrigger bents to step over an obstacle. Yesterday's bridge used outrigger bents to reduce the length of the bents on a big skew. Outriggers are nice but they're hard to design since there's less room to develop the reinforcement into the joints. This interchange was designed just prior to the 1989 Loma Prieta Earthquake, which demonstrated that knee joints have to be carefully designed for the opening and closing moments that can occur. 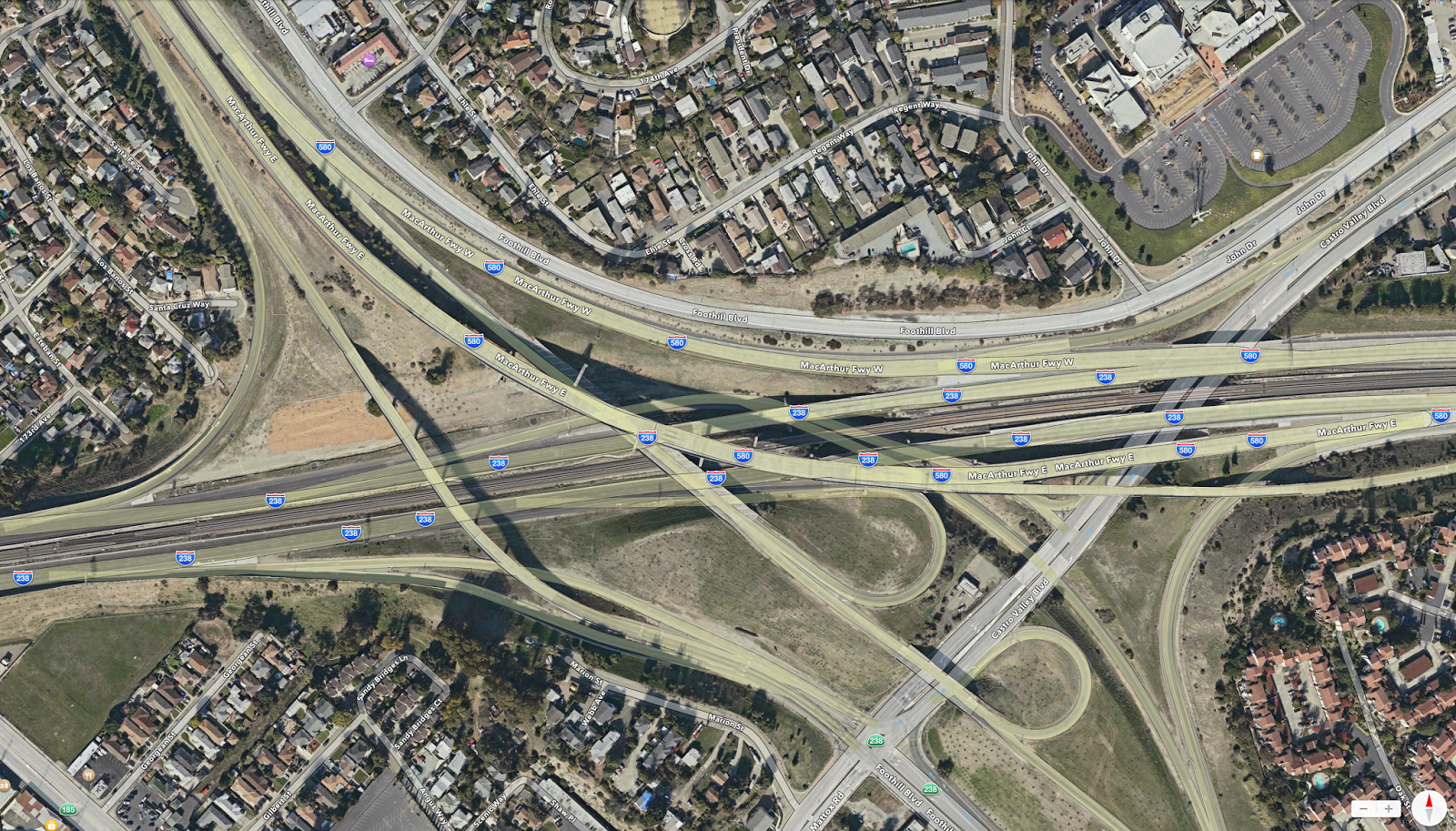 Alameda County, California Bridges: 580-238 Interchange by Mark Yashinsky is licensed under a Creative Commons Attribution-NonCommercial-NoDerivatives 4.0 International License.
Posted by Mark Yashinsky at 9:00 AM No comments:

Heading east from downtown Oakland to I-580, which is one of several expressways in Alameda County that have the suffix '80.'

The Foothill Blvd Undercrossings (33 0335) are parallel (northbound and southbound) bridges that carry I-580 over Foothill Blvd. These bridges are on a high skew and so they have outrigger bents perpendicular to the road supporting the superstructure (see photo below).

Even more interesting is how terribly cracked the pavement and even the concrete bridge superstructure is at this location. The ground must be slowly sliding or subsiding since the expressway was built in 1964 (These bridges carry over 140,000 vehicles a day). 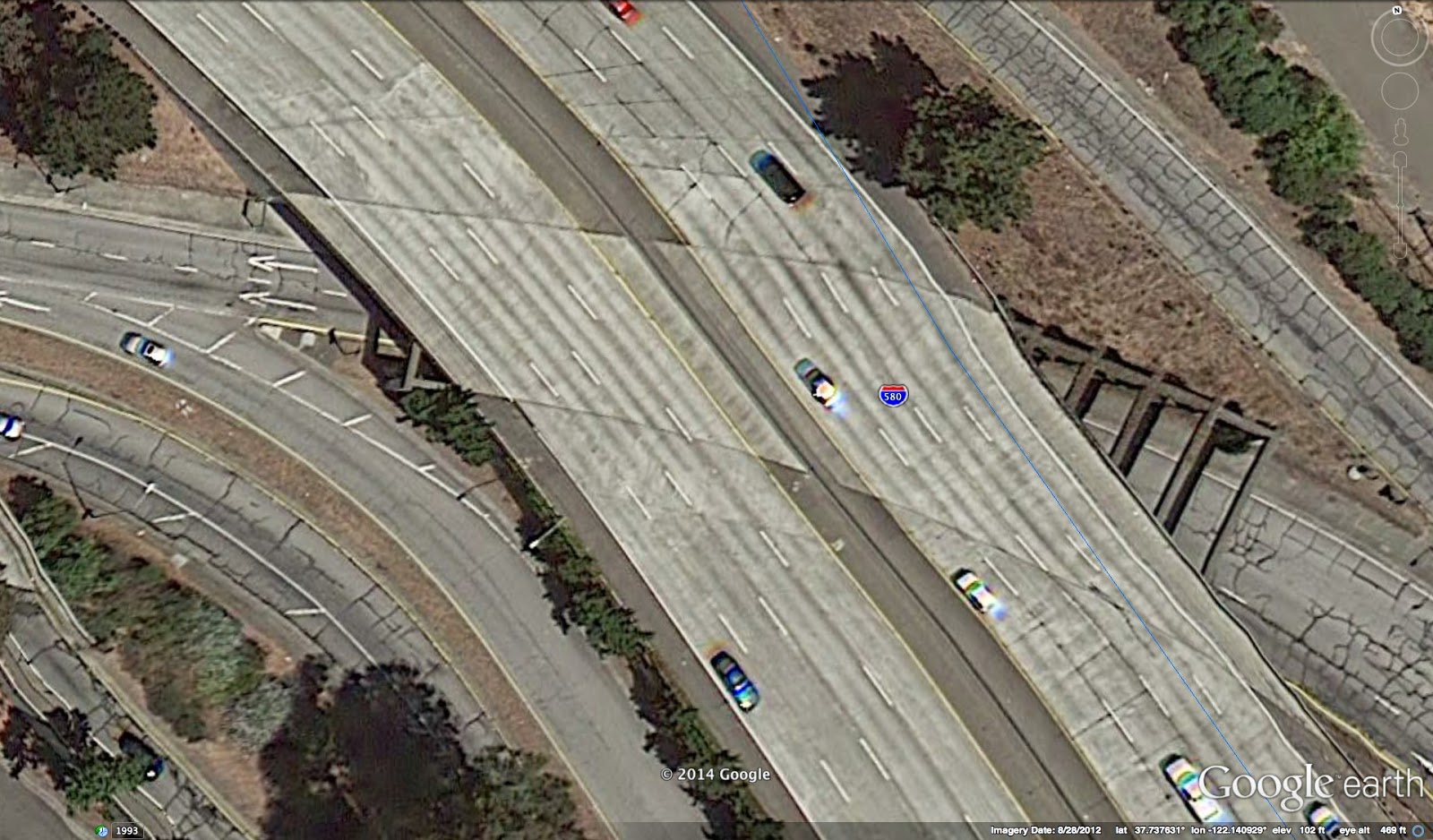 Alameda County, California Bridges: Foothill Blvd OC across Interstate 580 by Mark Yashinsky is licensed under a Creative Commons Attribution-NonCommercial-NoDerivatives 4.0 International License.
Posted by Mark Yashinsky at 9:00 AM No comments:

Only marginally more attractive than yesterday's Airport Connector is this elevated BART viaduct that runs along the median of San Leandro Street. These trains are very convenient, especially for people not wishing to be stuck in traffic during their morning and evening commute. One can take BART from San Francisco to Richmond (traveling under the Bay), and then take Amtrak from Richmond to Sacramento.

The BART system was begun in 1964 and had to survive several lawsuits before they began building their first tracks. The line between San Francisco and Oakland began service in 1972. The viaducts were designed for earthquakes, although the magnitude of ground shaking was originally underestimated. However, the system survived the 1989 Loma Prieta Earthquake with very little damage (to everyone's relief). BART passed a bond measure to retrofit part of their line (after a previous measure had failed). It looks like they never got around to retrofitting this segment though. 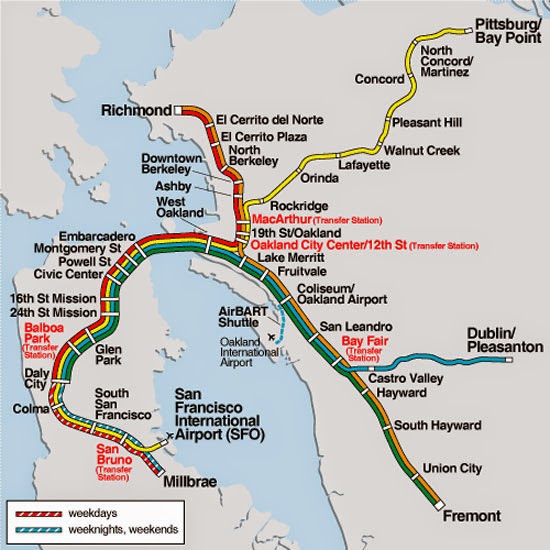 Alameda County, California Bridges: BART Viaduct by Mark Yashinsky is licensed under a Creative Commons Attribution-NonCommercial-NoDerivatives 4.0 International License.
Posted by Mark Yashinsky at 9:00 AM No comments:

This recently built structure carries automated cars between BART's Coliseum Station and Oakland's Airport. It's a patented system and so BART gave Doppelmayer a license to build and operate it for a number of years and keep the profit. These things aren't very attractive and they're multiplying all over the planet. A cookie cutter approach means they don't fit that well into their environment. For instance, they're not designed for the large earthquakes that can occur in Oakland. The columns are non-ductile but the connection between the steel structure and the concrete bents are designed to slide before the columns fail.