A little south of the Center Street Bridge is the recently opened Minto Island Pedestrian Bridge. The bridge doesn't actually cross the Willamette River but crosses the Willamette Slough on the west side of the island. This project took almost 10 years from the initial proposal to the completed bridge.

In 2008 several design options were studied. In 2010 a 600 ft long tied arch with a 14 ft wide deck was selected. In 2011 the city obtained a permit to cross over the slough. In 2012 OBEC Consulting was hired to complete the design of the bridge. Construction (by Legacy Contracting) began in 2015 but delays set the project back a year. Even small delays can ruin schedules since work in sloughs are limited to a few months out of the year. The bridge was finally opened in May of 2017.

The $10 million in funding came from the City of Salem, the Oregon DOT, and smaller groups such as Friends of Two Bridges. The bridge provides access between Salem's Riverfront Park and Minto Island. Part of the project was providing landscaping (by Greenworks) to integrate the bridge into the park. The city is anticipating the bridge's role in future events such as a yearly marathon. 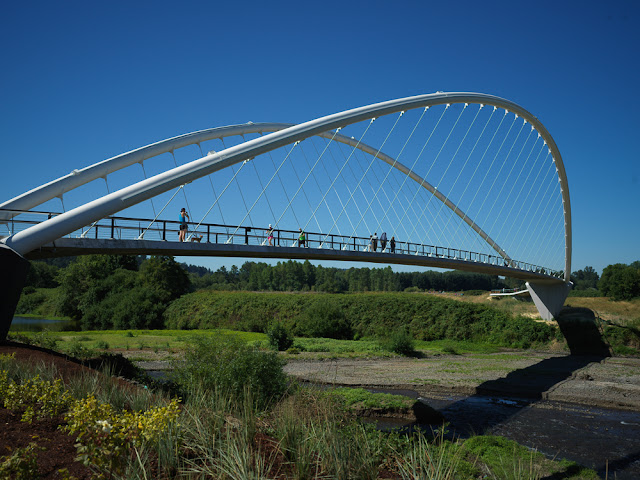 The bridge is a fairly simple structure. The two arch ribs are one inch thick circular sections, 30 inches in diameter, that rise 44 ft above the deck and extend 327 ft between the triangular abutment/piers. The concrete deck acts as a tie to restrain the arch ribs. The arches are inclined at about a 30 degree angle from vertical, perhaps to provide lateral resistance (no cross-bracing is provided). Single cable stays support the deck and are attached to plates welded to the steel arches and securely anchored into the concrete deck. 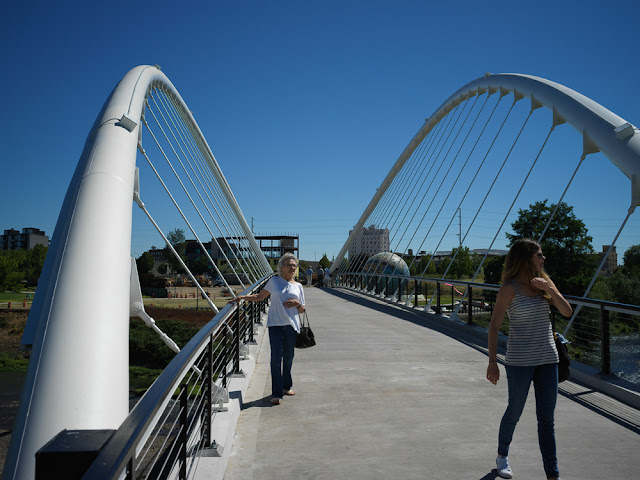 The bridge is reasonably attractive. A concrete deck for a steel arch bridge is a little annoying. Also, the black railing appears to be added without much thought to the aesthetics. The bridge isn't innovative but it makes a pleasant addition to the city's bridges. 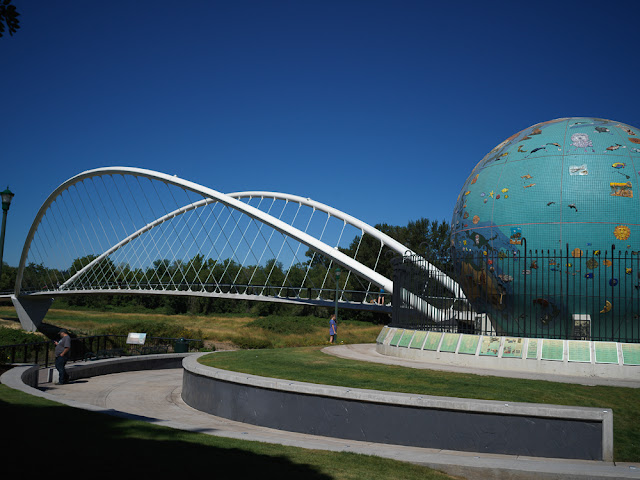 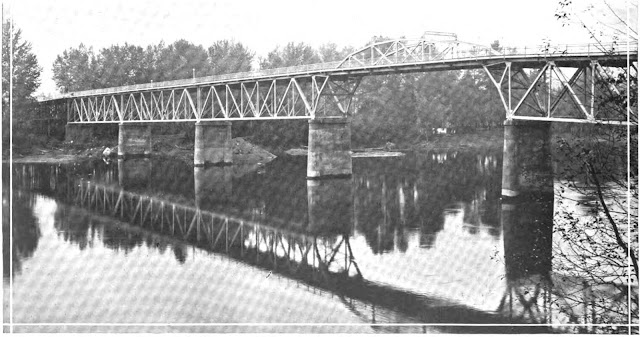 The previous structure was a deck truss bridge with a 156' long truss arch main span (the Bridgehunter calls it a cantilevered double intersecting polygonal Warren post truss span). The Center Street Bridge carried two directions of traffic until the Marion Street Bridge was built in 1952. 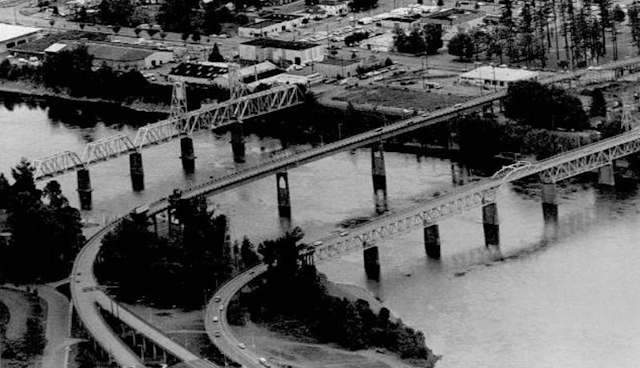 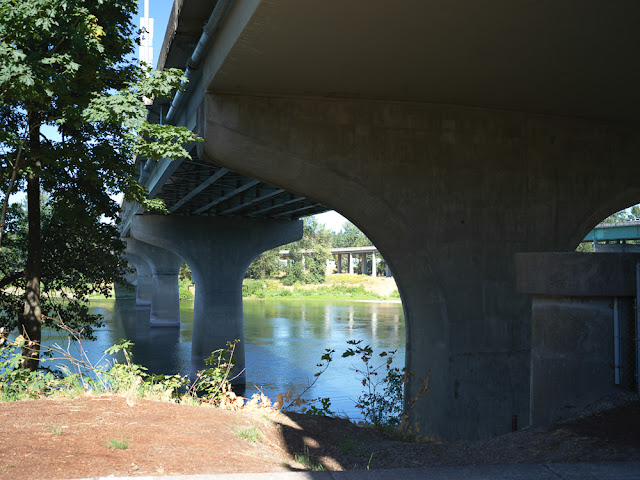 The new bridge switches from steel girders to a concrete slabs at the approaches. Perhaps these were part of the approach that was built in 1953. We can see an old abandoned support in front of the new bent in the photo above.

A hundred yards south of last week's Union Street Railway Bridge is the westbound Marion Street (I-22) Highway Bridge. This bridge is 2400 ft long and 56 ft wide with a steel plate girder superstructure. It was the longest plate girder bridge west of the Mississippi when it was built (in 1952). 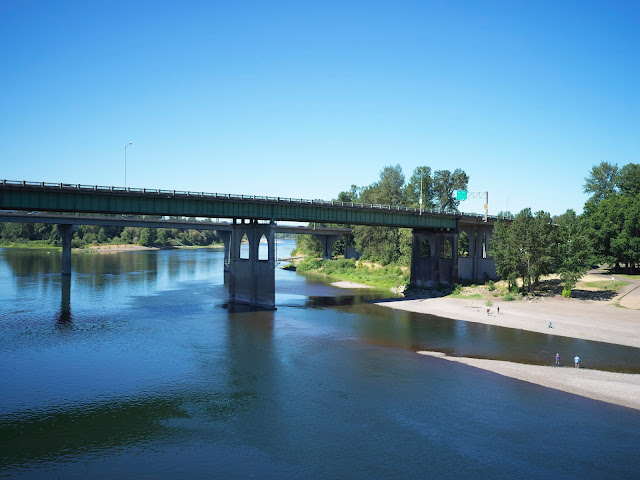 The bridge's most unusual feature is that it's supported on pier walls having gothic arch openings. Gothic arch shapes were also used on the nearby Independence Bridge and in some of the arch bridges by Conde McCullough along the Oregon coast. The designer of the Marion Street Bridge, Glenn S. Paxson succeeded McCullough as Oregon's Chief Bridge Engineer and may have used the arches as a tribute to his old boss. 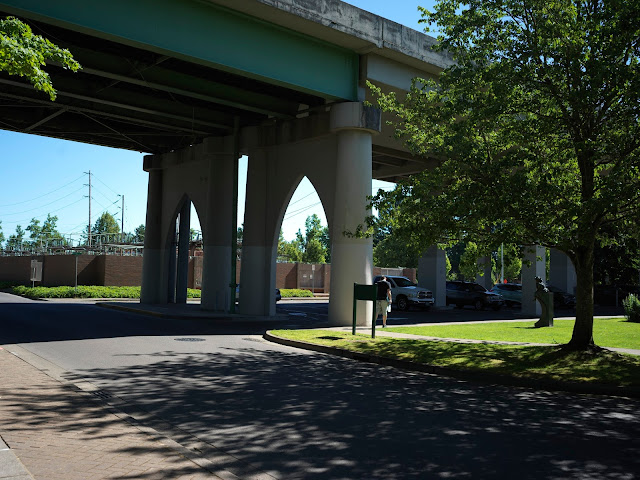 Before this bridge was built, all the traffic across the Willamette was carried on the adjacent Center Street Bridge. In fact, looking at the construction photo below (courtesy of the City of Salem), it appears that this bridge originally had only a single pier at each support (it was widened in the 1980s). That explains why the steel plate girders continue along the approaches on the original bridge but have been switched to concrete for the approaches of the widening (see photo above). 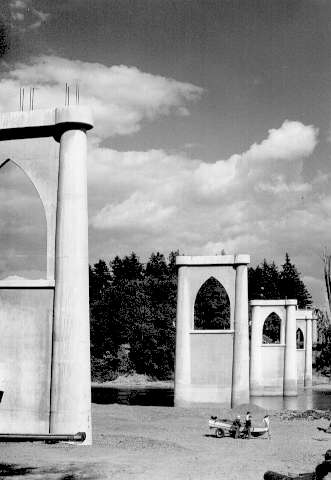 Continuing downstream along the Willamette River we arrived at the Union Street Railroad Bridge in Salem, Oregon. This bridge (like last week's Van Buren Street Bridge) is from 1913 and was built by the Southern Pacific Railroad. It changed hands several times before it was finally sold by the Union Pacific Railroad to the City of Salem in 2003.  The bridge was added to the National Register of Historic Places in 2006 and converted to a pedestrian and bicycle bridge in 2009. 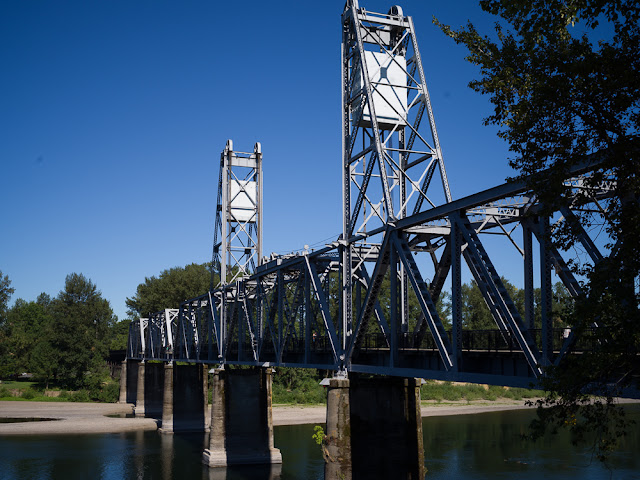 This structure is a vertical lift bridge that uses a patented system developed by the designers Waddel and Harrington. The top of the towers are 65 ft above the trusses for a total height of about 100 ft. The towers stopped working in the 1980s and the mechanism (and operator's house) was removed soon afterwards (see bottom photo). 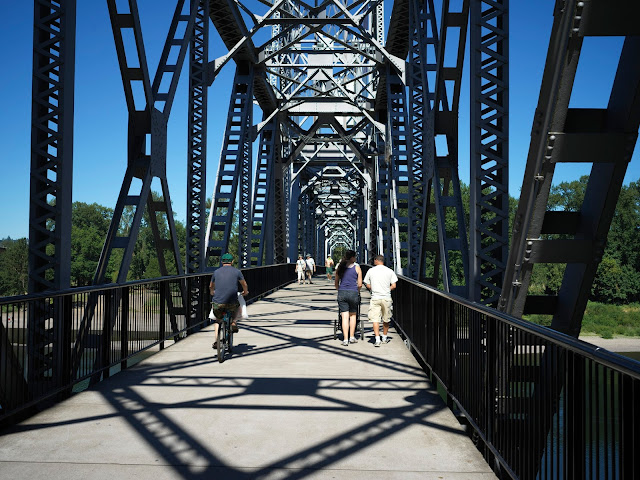 This longitudinally asymmetric five span bridge sits on concrete piers that were designed to be high enough to keep the track five feet above the highest recorded flood water on the Willamette. There is a 134 ft long lift span (shown in photo below) and four Pratt truss spans for total length of 755 feet. There is also an 850 ft long timber trestle on the west end. 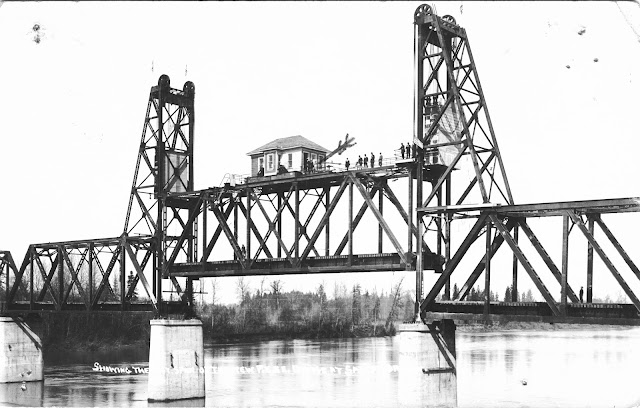 This railroad bridge (which carried it's last train in the 1990's) underwent considerable modification before it began carrying pedestrians. Lead based paint, ballast and the track all had to be removed. Besides being redesigned as a pedestrian bridge, it was also redesigned to carry emergency vehicles.