Bridges of Lyon, France: Pont Kitchener-Marchand across the Saone River

I was just commenting on how few continuous bridges are in Lyon when I came upon the Pont Kitchener-Marchand. It's a three span 380 ft long rigid frame structure on caissons with keys that prevent the piers rounded bottoms from moving longitudinally. A metal sculpture depicting the spirits of the Rhone and Saone Rivers is mounted above the piers. This reinforced concrete bridge is covered with what looks like bathroom tiles.

The Viaduc de l'A6 consists of two parallel prestressed box girder bridges (between the Viaduc l'Quarantaine and the Pont Kitchener Marchand) that extends beyond both sides of the river before disappearing into tunnels (see Google earth photo from the previous week's blog). The river crossings are supported on wide, downward tapering piers. 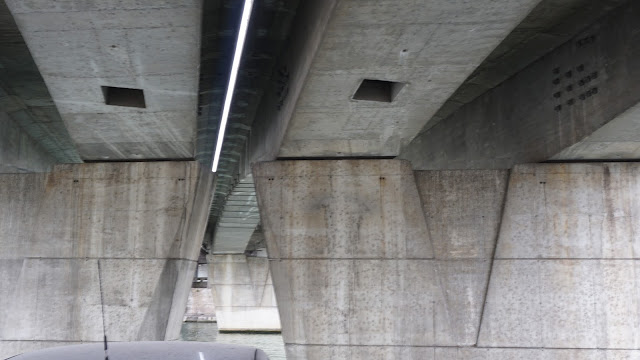 There is surprisingly little written about this haunched girder bridge (built in 1971). Structurae reports that the river spans are 30.9m - 60.0m - 30.9m and that it was built by SGE Societe Generale de entreprises and renovated by Campenon Bernard with prestressing by Fressinet. Perhaps one shouldn't expect to learn much about a bridge with such a prosaic name.

In the photo above, we can see that there is a discontinuity between the soffits and the substructures. Bridges in Lyon always seem to have the superstructure separate from the substructure (except for the arch bridges). I wonder if the soffit openings (in the photo above) are from the renovation? The bridge has attractive haunched girders and flared pier walls, however, the approach spans are decidedly less attractive (photo below courtesy of Daniel F Valot). 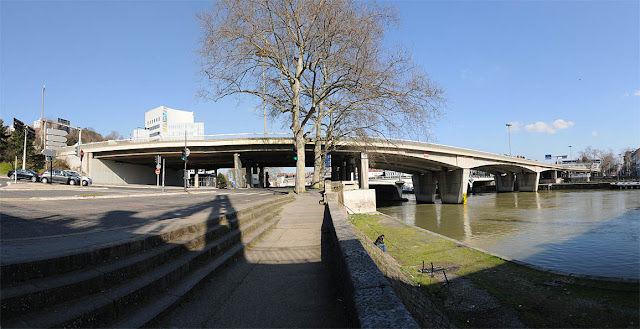 Continuing upstream along the Saone we soon arrive at the Viaduc la Quarantaine (also called the Pont Ferroviaire Kitchener). It's a rigid steel railroad structure consisting of one full arch span across the channel and half arches for the side spans. The main span is supported on big steel rocker bearings with smaller bearings supporting the half spans at the abutment seats (see photo below).

If I'm translating the French on the Lyon Bridge Blog correctly it seems the city felt the previous bridge was an eyesore and ordered this replacement structure, which was completed in 1932. Although most bridges had Art Deco details in the 1930s, this bridge seems to have been influenced by 'Orientalism' with curlicues supporting the deck overhang and with a pointed arch. 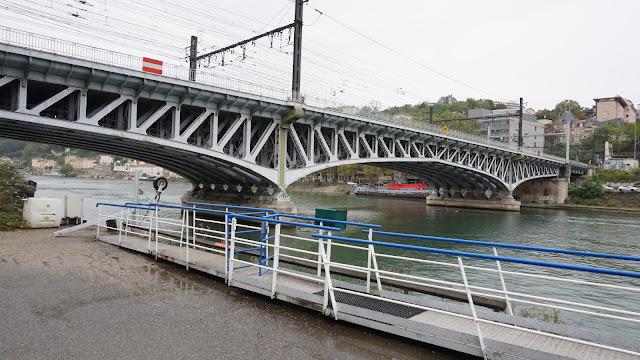 This bridge carries the French National Railway (SNCF) trains to and from the previously studied Mulatiere Railway Bridge and the Perrache Viaduct. I count at least four sets of tracks on the deck although it's hard to tell because there are so many switches on the bridge. At this location the Saone is a narrower river with shorter river crossings (maybe 450 ft). 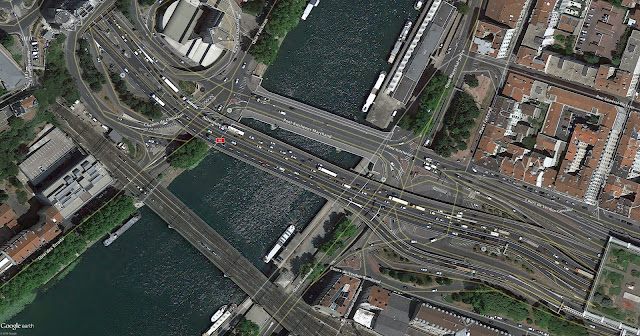 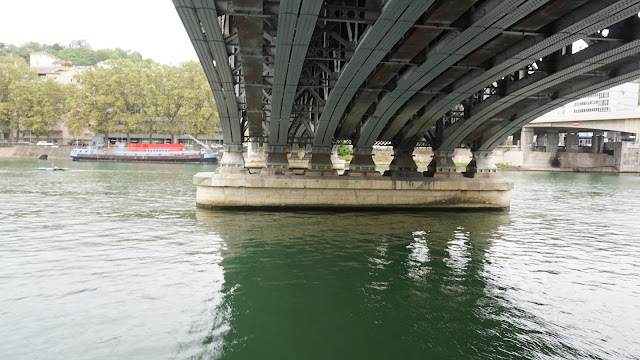 The Viaduc Quarantaine is in good shape and its an attractive bridge. I'm not sure why it's called 'Quarantaine,' which means quarantine in English. Maybe this area was quarantined at some point?

North of the Mulatiere Bridges is the Place Natique (a small inlet on the left bank of the Saone) that is crossed by a couple of bridges. The little arch bridge above has two steel pipe arch ribs that come together at the supports. A little further upstream is a precast slab viaduct that carries light rail to and from the Pont Raymond Barre. 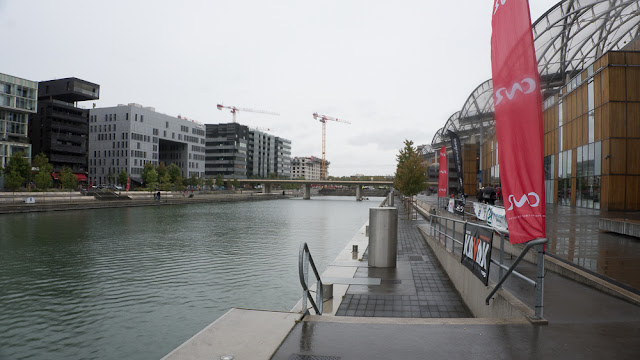 Bridges of Lyon, France: The Mulatiere Bridges across the Saone River

The A7 (Autoroute du Soleil) Bridges and a parallel three span cantilevered steel truss (railroad) bridge cross the Saone just west of La Confluence (shown on the Google earth photo in last week's blog). These are called the Mulatiere Bridges, after a nearby town that was eventually absorbed into Lyon. 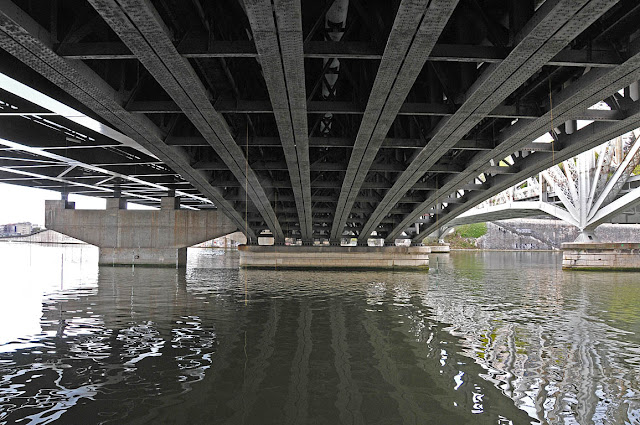 According to the Structurae Website, the railway bridge is part of the Saint Etienne-Lyon Railroad Line which is 557 km (346 miles) long. The bridge has an attractive fan-like arrangement of diagonal truss members as the truss deepens at its supports. The A7 Bridges are a steel truss arch carrying the southbound lanes (the middle bridge) and a steel I-girder bridge carrying the northbound lanes (the bridge on the left). 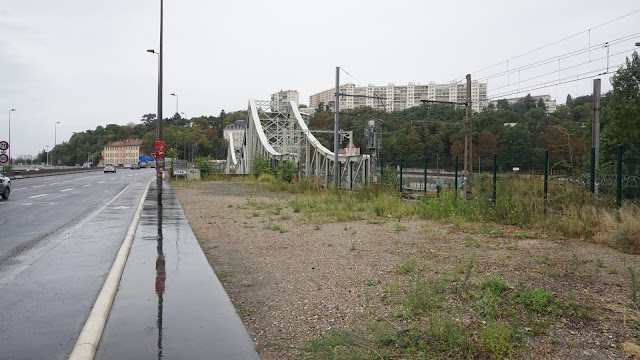 Originally the highway and railway were on a single structure but a separate railway bridge was built by Maurice Koechlin in 1914 (there's also a parallel railroad tunnel that was built in the 1820's). The railway bridge was damaged during WWII and repaired in 1946. It's 190m (626 ft) long and carries two sets of tracks. It must have been recently sandblasted and repainted because when I looked at the photos of it in Google earth (by trois tiff) it was completely covered in rust! 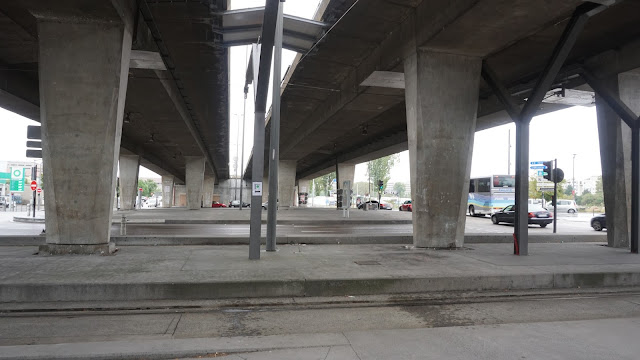 The north approach to the A7 bridges are reinforced concrete box girder spans on two column bents. It's a nice enough looking bridge but nothing spectacular. However, the Directorate of Transport Infrastructure (DGITM) is part of the Ministry of Ecology, so perhaps there efforts are focused on protecting the environment.

In the photo below we are looking back at the Pont Raymond Barre (across the Rhone) from under the north approach to the A7 Highway Bridges that goes across the Saone. 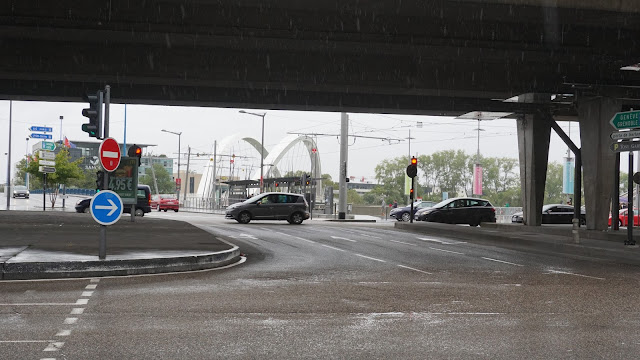