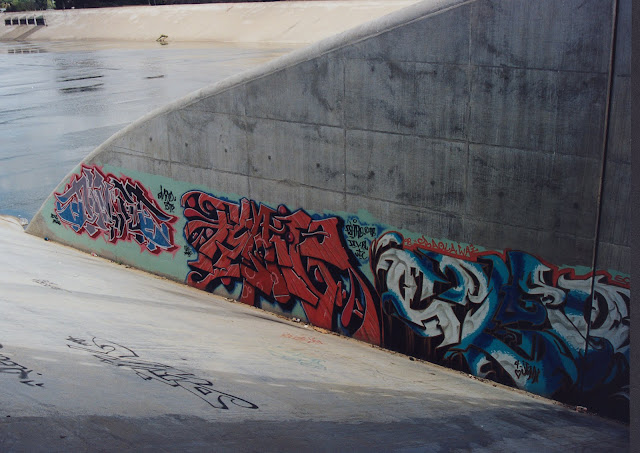 Atlantic Avenue crosses the Los Angeles River at a sharp angle a little south of the Century Freeway in Los Angeles. The bridge has extremely long cutwaters to protect it from all the debris that the river carries at flood-stage (the river can't carry all the water that accumulates during heavy rains).

I believe that the graffiti painted on one of the cutwaters says Feyiro, who was a character in the novel Wicked. The novel was a re-imagining of The Wizard of Oz from the wicked witch's point of view. Perhaps it is also be the nom de plume of the artist?

I like how the painter went through the trouble of copyrighting the painting (just like I do on my blog). He or she must be very optimistic that it wouldn't be immediately covered by the city (or by another artist). I also like the flat surface of the letters that are also deeply creased with a colorful grain. The letters in the center have a different color and texture just like the graffiti yesterday, which was painted 400 miles away in Crockett, California. Apparently there must be different periods and movements in graffiti just like in paintings on canvas.