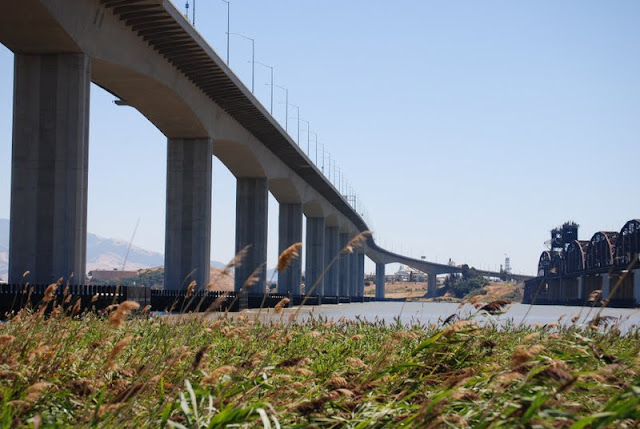 The Sacramento and San Joaquin Rivers flow into Suisin Bay, the Carquinez Strait, and San Pablo Bay before emptying through the Golden Gate into the Pacific.

Where Suisin Bay meets the Carquinez Strait there are several bridges that connect the cities of Benicia and Martinez. The newest of them has a segmentally constructed cast-in-place, post-tensioned box girder superstructure supported on tall reinforced concrete piers.

This structure has a long, sinewy, ribbed shape like the body of a centipede. The new bridge was built after the original truss structure was widened to carry more traffic but began to have maintenance problems from all the truck traffic on the outside northbound lane. The new bridge solved this problem while providing more capacity in both directions.

In this photo, we can see an old railroad bridge (between the two highway bridges) on the right side of the photo.