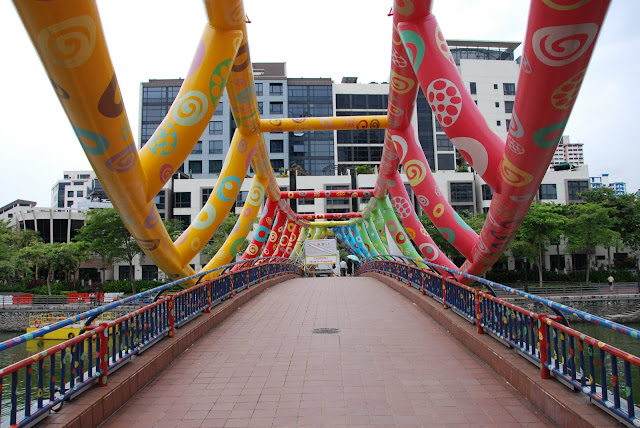 After the historical/political paintings on the Coronado Bridge, it's refreshing to look at the purely abstract and sensory art on the Alkaff Bridge. I think the smaller hand painted circles on the blue and red rails make a nice contrast to the larger, more detailed circles on the structural elements. Pacita's art reminds me of Larry Poons and the Color Field Artists of the 1960s and 1970s. There may also be a Filipino element to her work although she was hardly a folk artist.

This bridge has an interesting structure.  Four parabolic-shaped members descend at midspan to support the deck and then ascend to form triangles with diagonal elements at the supports. There is also a bottom chord along the sides of the deck that ascends slightly at midspan. The diagonals and the bottom chord are in compression and the parabolic elements are in tension. I think the structure is a kind of truss, although it also reminds me of a suspension bridge with it's parabolic shape. We'll take another look at this interesting structure tomorrow.