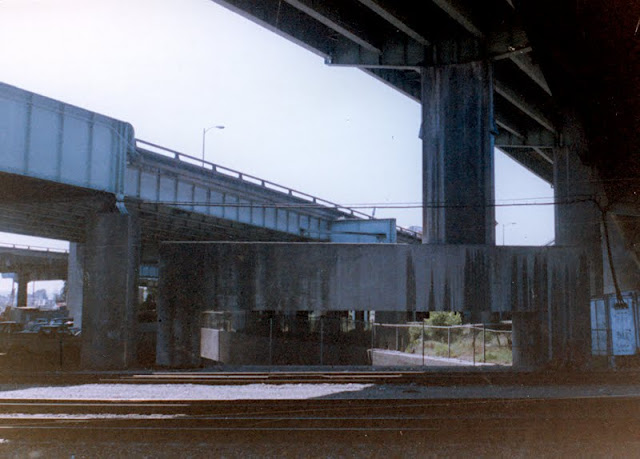 Another bridge on bridge, this one part of the Distribution Structure that connects traffic to I-80, I-580, and I-880 just east of San Francisco Bay (see Google Earth Map below). The bridges were built in the 1950s, but one structure was replaced after the Cypress Viaduct collapse and the rest have been retrofitted. Because of the large traffic volume, no one is eager to replace the entire interchange. Its at the other end of the Cypress Viaduct Replacement from the Stack. The interchange is also called the MacArthur Maze and a section of it was replaced after a tanker truck crashed and burned on it a couple of years ago.

The photo shows another situation where a support was required over a river channel. Therefore, a small bridge was built over the channel to support the column. We can see the railroad tracks in the foreground that prevented the designer from placing the column beyond the channel. Bridges are built to carry people and goods over obstacles. Sometimes the bridge's supports also need bridges when there are a variety of obstacles to be avoided.