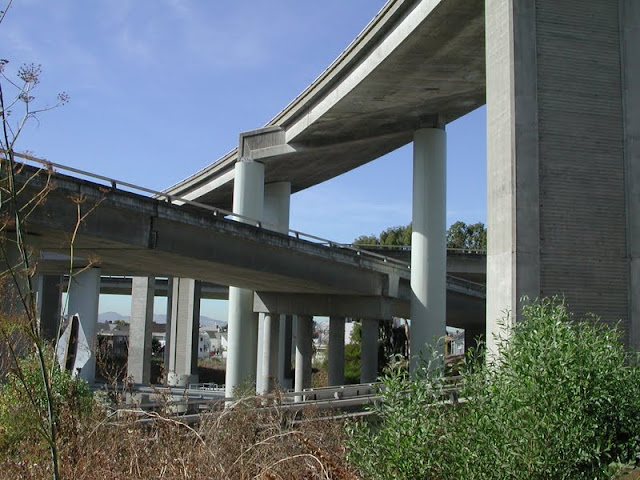 We are currently looking at complicated urban interchanges in California. There are a number of themes I want to explore. Can a connector or ramp on a busy urban freeway ever be a work of art? Is there something pleasing about the connectors as they step around each other? Does the subsequent seismic retrofit to these structures add or detract from their appearance?

Three routes (I-980, I-880, and I-24) come together in Oakland, California as 'The Stack.' During the Loma Prieta Earthquake this interchange, which looks like a big 'X' from the air, had similar damage to the four ends: crumbled interior diaphragms from too many cable restrainers holding the superstructures together at the hinges.

The concrete barrier rail had to be isolated from the columns to prevent a smaller effective column length and subsequently larger shear forces. I wonder if those knee joints have to carry the column plastic moment? Probably the columns are pinned to the bent caps, which became standard policy after Loma Prieta.

We'll continue looking at urban interchanges over the next week to see if we can learn anything important through the process.

Hi Mark, I used to live in San Diego and saw some these complicated interchanges.

Retrofitting a structure is one of the most difficult tasks for a bridge engineer. In an ideal world retrofits would make the bridge safer and attractive.....

But in the real world, money is often not available to accomplish both and obviously safety is the number one goal. My main complaint about engineers is that aesthetics is never considered as part of the process. Its always put a bunch of huge round columns in and worry how the contractor will feel about it.

I'm guilty of that right now. I'm up against a time crunch for a precast bridge design (with no aesthetics)and I have just added more concrete and steel to get this project in on time.

It actually will be an awful looking bridge. My only defense is I KNOW its an awful design while most engineers don't care how it looks.

So, I'm hoping to educate other engineers and the public to at least recognize the impact of bridges in their environment. (As you do!)

This comment has been removed by a blog administrator.