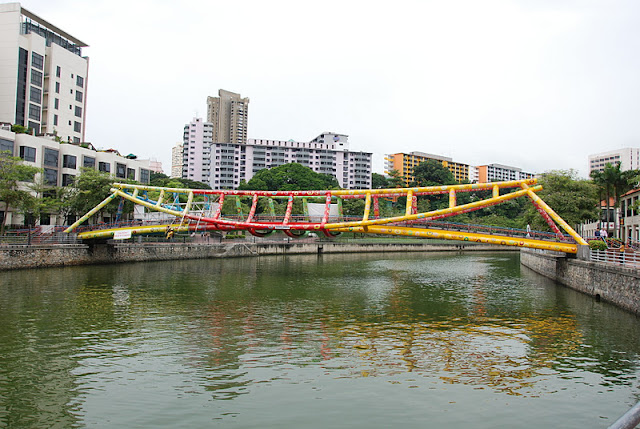 Singapore has some of the prettiest bridges in the world, including the Alkaff Bridge. It was built in 1997 as part of an effort to improve accessibility to the walkways on each side of Singapore River. The bridge is near where the Alkaff Quay once stood and where Robertson Quay still stands.

The bridge was built to resemble a tongkang (a lightweight boat that was once was a common sight along the river). It's a 180 ft long single span steel through truss pedestrian bridge.

The bridge was painted in 2004 by Pacita Abad, a famous Fillipino artist. She came to Singapore in 2003 and somehow convinced officials to support her plan to paint the bridge. She got Visual Media Works to turn her hand sketches into bridge plans, Nippon Paint to provide 56 different colored paints for the project, and PIRAS rope climbing workers to clean, prime, and paint the bridge. Pacita completed the job (almost a year later) by hand painting the railings. Unfortunately, she died soon after completing this project.

We'll take a closer look at this bridge tomorrow.