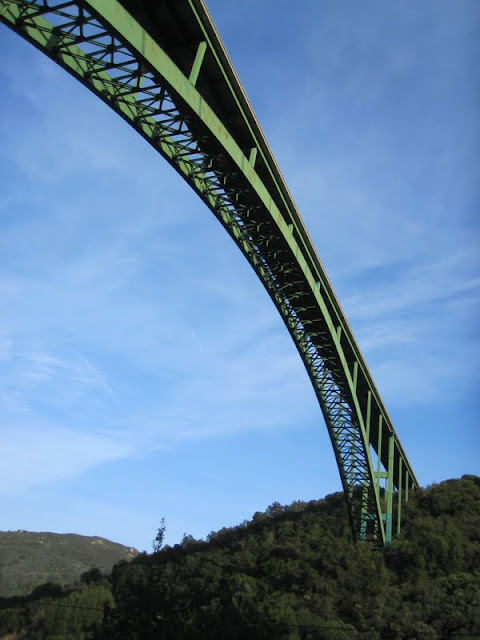 I thought we could look at some interesting California bridges.

The Cold Spring Canyon Bridge is on State Route 154 in the mountains north of Santa Barbara. It has a steel arch span of 700 ft and the deck is about 420 ft above Cold Springs Canyon. I would guess that the two ends of the arch were supported by cables attached to towers as they were built over the canyon and connected together when they reached midspan. Then the deck was constructed on top of the arch, supported by steel spandrel columns.

It was designed and it's now maintained by the State of California. I was a little disappointed to see that rust is beginning to show through the paint. Because I'm always bragging about what good maintenance California provides for its bridges, I'll have to find out why this bridge is beginning to look ragged. Still, it's shocking to come across such a huge structure while driving through forests and mountains.

The bridge was built by the American Bridge Company in 1963, it was retrofitted by Buckland and Taylor in 1997, and its going to get a special barrier to prevent people from jumping to their death each year.