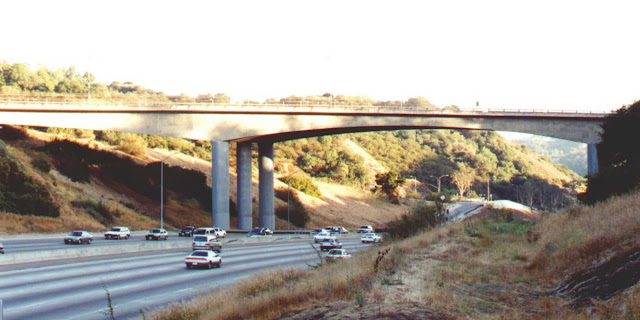 When I first saw this bridge high above the  San Diego Freeway, I thought it was really great. The tall columns and haunched girders make for a dramatic entrance into Los Angeles. The Santa Monica Mountains are covered in a sunburnt chaparral with no sign of human habitation.

Mulholland Drive Overcrossing has a three span, reinforced concrete box girder superstructure on three column bents. It was built in 1959 and it has been designated as a historic structure.

I was less pleased by its appearance after we encased the concrete columns with steel shells in the aftermath of the 1994 Northridge earthquake. However, I was really displeased upon attending a meeting last month (on the widening of I-405 to ten lanes) to discover they are now going to remove this historic landmark! The people of Los Angeles must take an unsentimental attitude towards their bridges.