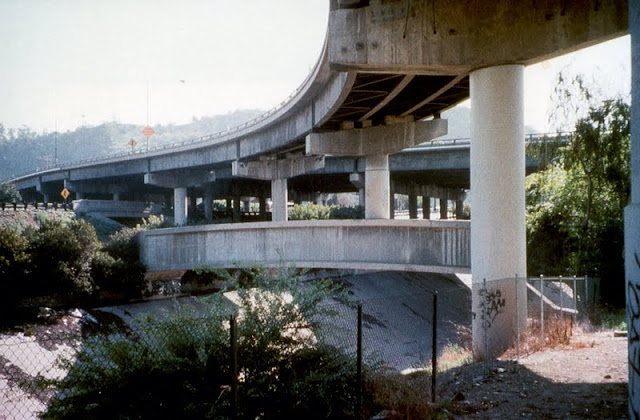 The Elysian Park Viaduct is a long steel girder and RC box girder (4 cell) bridge on multicolumn and single column bents and pile foundations. Its part of a network of connectors between I-5 and I-110 in Los Angeles. I've written about how hard it is to find a place to put your columns in urban interchanges. At the Elysian Park Viaduct the engineers had to design a bridge to support one of the single column bents over the Arroyo Seco Flood Control Channel.

I like the somewhat paradoxical concept of a bridge supporting a bridge. When the science writer Douglas Hofsteader has a group of people at his disposal, he likes to have them sit on each other's laps in a ring. There's something odd about the fact that the entire group is self-supporting. Can a bridge superstructure support some of its columns? A special prize for the best self-supporting bridge drawing sent to this blog! 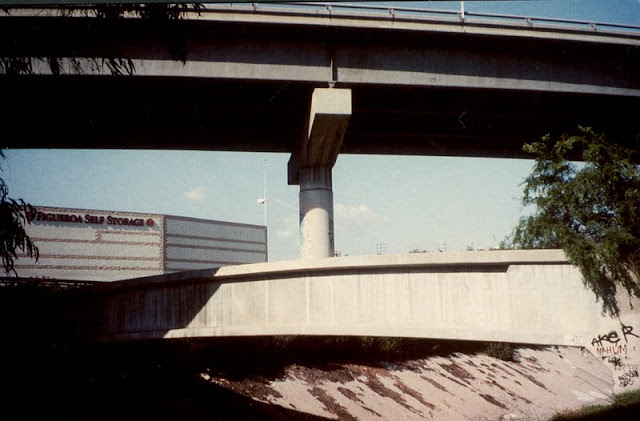 I have a few more bridge on bridge photos to share. I also have several photos of a bridge column going through a hole in one bridge deck to support a higher level bridge. I always wondered what would happen when the two bridges start moving out-of-phase during an earthquake? Can you think of any other odd alignments between bridges in an interchange?

You can spot the Elysian Viaduct on the southwest side of the interchange shown in the Google Earth Map below (Bridge #53-1424). Like many of the bridges in Los Angeles at the time of the Northridge earthquake, the columns on Elysian Viaduct had been encased in steel shells and the bridge had almost no damage. 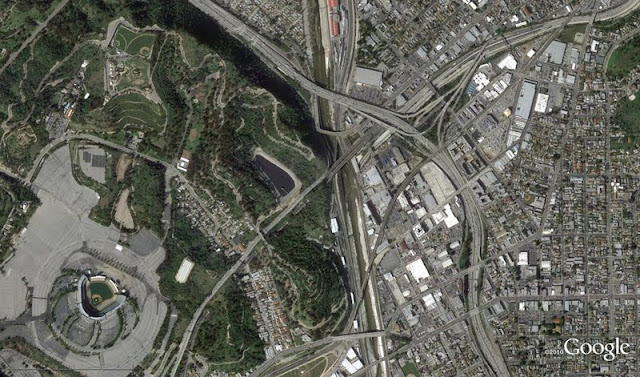 In Greek mythology, the Elysian Fields are the final resting place for the souls of heroes. Of course, there are Elysian Parks all over the world including one just west of this interchange (and north of Dodger Stadium).

Mark that is the oddest bridge I have ever seen. My head hurts when I think about designing it!