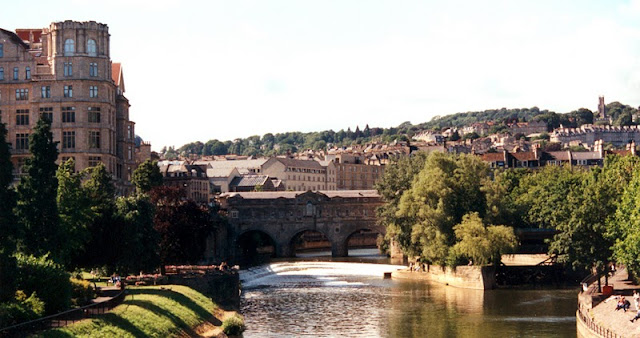 I was hoping to enjoy a bath or swim in the mineral springs of Bath. However I was disappointed when my money just paid for the privilege of looking at some Roman ruins! Actually, I had arrived in Bath too early (or too late). In 2006 the Thermae Bath Spa opened with bathing and swimming facilities.

The thermal springs of Bath are a surprising phenomena since hot springs usually occur near the edges of tectonic plates (the UK is not seismically active). I remember after an earthquake near Paso Robles, California (in 2003) the thermal springs were disturbed and hot water gushed onto the streets for several months.

The Pulteney Bridge was completed in 1773. At that time, the upper class enjoyed vacations to Florence and Venice and became fond of the pretty river bridges lined with shops. The Pulteney Bridge has shops along both sides and a road (soon to be turned into a footpath) down the middle. Over time it was damaged by floods, by widenings, and by the shops that hung over the sides. The bridge was restored to something like it's original design in 1951 with further work done in 1975. It is is now a national monument and designated an English Heritage site.

I took this picture while standing on the Parade Bridge over the River Avon and looking north at Pulteney Bridge. Just downstream is a parabolic-shaped weir and the Bath Abbey.