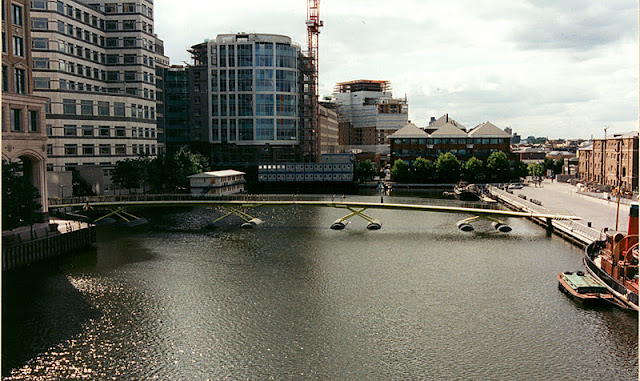 A few months ago, we looked at bridges that cross the Thames River west of London. It's an idyllic area with pretty towns that have a rural feel.

The east side of London north of the Thames used to be filled with busy ports that are now closed. A lot of money went into converting this area into a financial center to rival London, but with mixed results due to the volatile economy during the past 20 years.

This area (called Canary Wharf) has a lot of pretty footbridges to carry people across the channels where ships loaded with goods used to travel. I think the developers must have encouraged the bridge engineers to be innovative in the design of these little bridges.

For instance, this pontoon bridge looks like it can be taken apart and reassembled wherever it might be needed. Each module is composed of two air-filled barrels with X-braced four-legged piers supporting a tubular superstructure and a rubber deck. The ends of the bridge are supported by the quay walls on each side of the channel. More information on this bridge can be obtained from the website that the designers (Anthony Hunt and Future Systems) created.
Canary Wharf is in the middle of the big downward bend in the Thames River shown in the Google Earth Photo above. We will look at some of the other bridges in this area over the next few days. 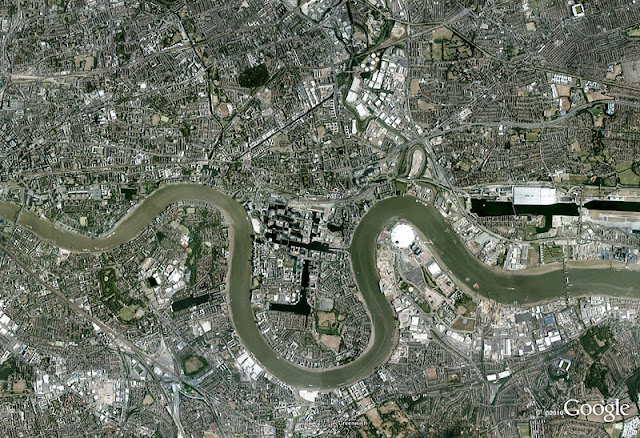 Mark whenever I look at your photos I,