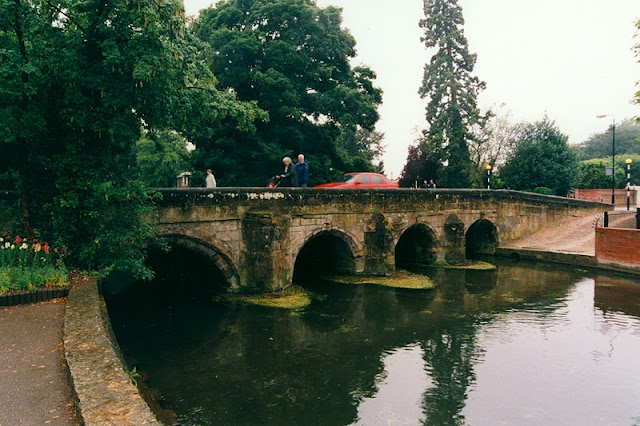 A closer look at the Crane Bridge. The photo shows the facing stones acting as a retaining wall for the embankment. Also, the closest cutwater is much taller for some reason. It looks almost like a boat ramp beside the bridge, except the arches look too small for anything bigger than a kayak.

Pools of algae have collected in front of each pier and the bridge is covered in lichen. The wet English climate appears to be ideal for a variety of plant life.

While doing research for this article, I found several bloggers complaining about being harassed by landowners while paddling on the Avon. In the U. S. all navigable waterways are owned by the public. In England the public has the right to use established footpaths but no such right exists for traveling on rivers that pass through private land. However, an act by King Charles II may have given such rights to the public on the River Avon.

The Crane Bridge is a couple of blocks to the northwest of the ancient Salisbury Cathedral. The Town Path Bridge is a couple of blocks further to the west. The ancient town of Harnham and the St Nicholas Bridge that was built in 1230 is just south of the pasture to the west. The Nadder, the Ebble, the Wylye, and the Bourne Rivers, all tributary to the Avon, flows south to Dorset and the sea.