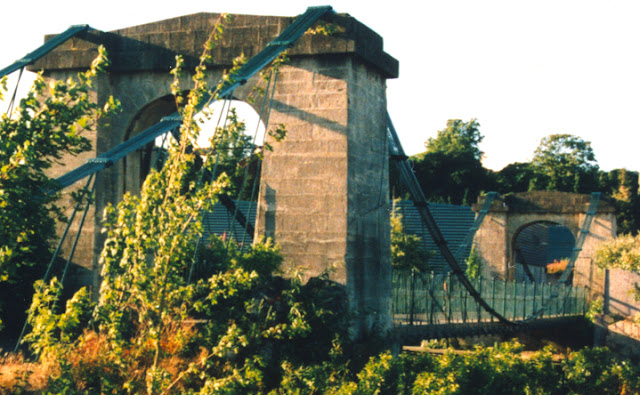 A 19th century wrought iron suspension bridge across the River Avon. The bridge was built in 1836 with iron chains instead of steel cables, which wouldn't be in use for another thirty years. The iron chains were draped over a pair of squat, stone towers. Each chain has a pair of sloping hangers supporting the deck. The slope of the hangers becomes more oblique towards the center of the bridge and puts longitudinal elements of the deck into compression. Each hanger is attached to a steel floor beam which carries the timber deck and iron railing.
An interesting article by RA Griffiths was written about this bridge.  The author discusses the designer, the design, the bridge's history, and recent improvements to the bridge and it's site. A structural analysis of the bridge is also provided. We'll take another look at this interesting bridge tomorrow.