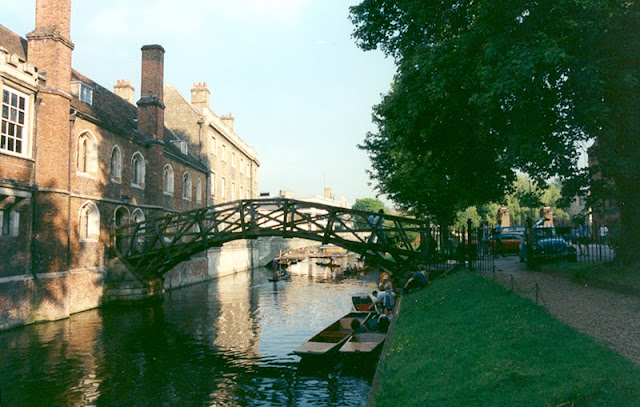 This is an odd bridge. One end is supported by the President's Lodge, which is the oldest building on the River Cam (built in 1460). It's called the 'mathematical' bridge because it's design was claimed to allow one to remove any member without affecting it's stability. It was also said to be based on a design by the 16th century Italian architect Andrea Palladio.

The story that it was designed by Isaac Newton, that it was built without nails or connectors, that the design came from China, that the students took it apart and then couldn't reassemble it, etc. are all apparently untrue.

It was designed by William Etheridge and originally built by James Essex in 1749. The current bridge was built to the same design in 1905 but in teak instead of oak. It is an interesting design, with long members fanning out to form tangents to the arch with short radial members that tie the bridge together.

A much longer article about this interesting bridge can be found at The Bridge in Winter on the Internet.