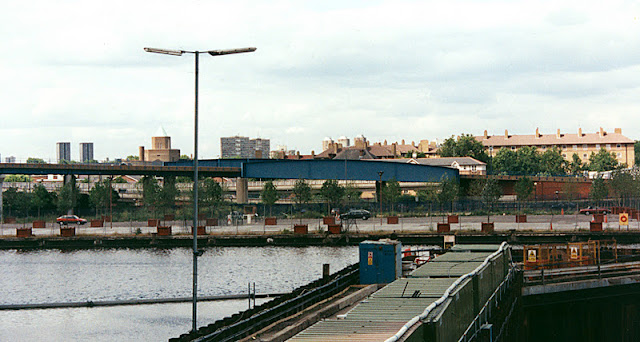 The Dockland Light Rail (DLR) tracks leave Poplar Station and turn to the southwest on an embankment supported by handsome red retaining walls. The tracks continue on a long single-span steel through plate girder bridge over Aspen Way. The bridge deck is composed of precast concrete slabs supported on floor beams attached to the bottom flange of the plate girders. The through girders are supported by a two column bent on each end at a high skew. Past this bridge some of the tracks go south towards Heron Quays and some head west towards London.

The most distinguishing feature of the elevated tracks south and west of the Aspen Way DLR Bridge is the blue railing attached to the sides of the slab with square steel plates. The orange of the concrete and the blue of the railing is what you immediately recognize as the Dockland Light Rail.

The people in the communities surrounding Canary Wharf and Docklands live in an uneasy peace with the developers. They once sued them for interfering with their TV signals and lost. Hopefully, the re-development of this area has provided some jobs to the surrounding communities that were getting poorer after the closing of the ports and warehouses.

Its strange that tree names are so popular in an area with so few trees. The bridge crosses Aspen Way next to the town of Poplar but I don't see any Aspens, Poplars, or any other tree except a few clustered in parks. The great forest that once blanketed England has departed, although you can see that a few trees in wooden boxes were placed along the far quay.