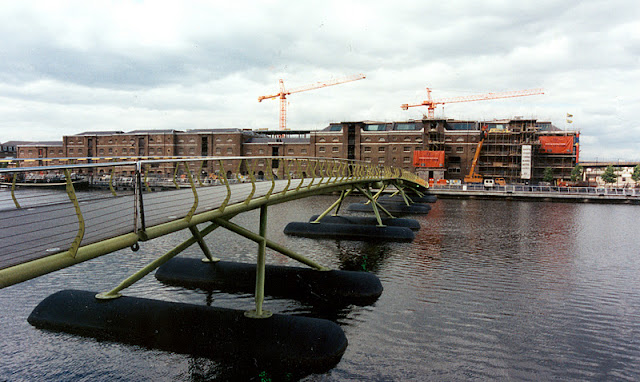 Another look at the West India Quay Footbridge. It's hard to imagine this area when it was mostly ships and warehouses for the distribution of sugar and rum from the West Indies (a chain of Caribbean Islands that includes earthquake-ravaged Haiti). Columbus thought he had found a new route to Southeast Asia and so they called the region the West Indies after they realized his mistake.

The Happy Pontist correctly stated that the bridge pontoons are anchored to the channel bottom. This area is affected by tidal currents so the anchorage must keep the bridge from lifting off the quays during high tide.  He also correctly named this bridge. I was originally reluctant to give the proper name because I didn't know if I would be able to continue to do so for all the bridges around Canary Wharf.