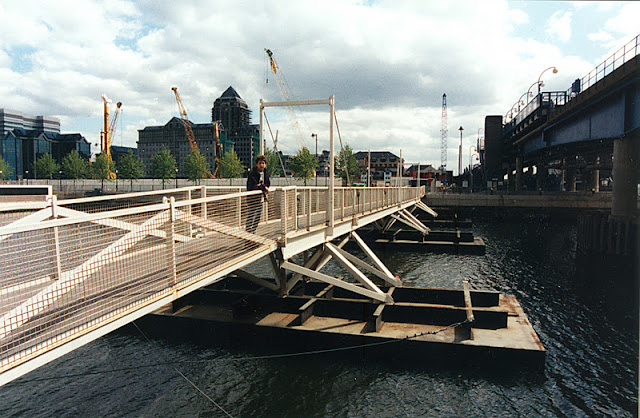 I'm probably giving this bridge the wrong name, but since it no longer exists, it may not matter. Pontoon (floating) bridges are often used as temporary structures and so perhaps it had served its purpose. It's not as fancy as the nearby West India Quay Footbridge which has been compared to a 'water skater insect' due to its visual grace. This bridge looks more like a utilitarian platform to get pedestrians across a channel in Canary Wharf.

Pontoon structures are an interesting class of bridges. They are a good idea in theory, but they sometimes have problems in practice. The first recorded use of a pontoon bridge was in China in the 11th century B.C. They are often used by the military as a quick way to get across a river. The Persians apparently liked them and built famous pontoon bridges to pursue the Greeks across the Bosporus and across the Hellespont. Usually they are carried by an army and removed after they have crossed (to make it harder for the enemy to follow). My experience with them was occasionally driving on the Lake Washington Floating Bridge in Seattle before it sank during a storm in 1990.