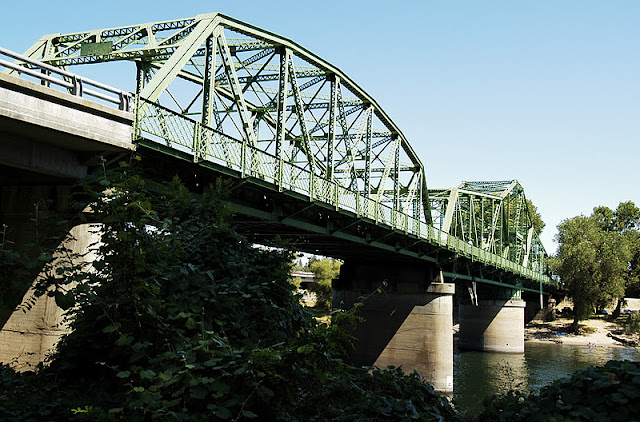 Many of the rivers coming out of the northern Sierra Mountain Range empty into the Sacramento as it flows south from Mt Shasta (for 450 miles) to Suisun Bay. Perhaps I can provide photos of all the bridges crossing the Sacramento River after I photograph a few of the bridges I'm still missing.

According to Historic Highway Bridges of California (published by Caltrans in 1990), the Jibboom Street Bridge is a cantilever swing bridge. The main span is a 351 ft long swing through span (on the left). The side spans are through Parker trusses. The bridge was built in 1931.

The swing span hasn't worked in many years, which is just as well since large vessels shouldn't be going up or down the American River. Its far too shallow and there are too many rapids. I wonder where the name Jibboom came from? It sounds like somebody's last name. Maybe a business person from the days of the Gold Rush.

I mentioned a few days ago that cyclists are encouraged to take the SNRR Bridge across the American River during the winter because the Jibboom Street Bridge can be under water due to flooding. Perhaps the swing span no longer works because the bridge is periodically under water? I remember flooding damaged the swing and lift mechanisms on most of the movable bridges along the Gulf Coast after Hurricane Katrina.