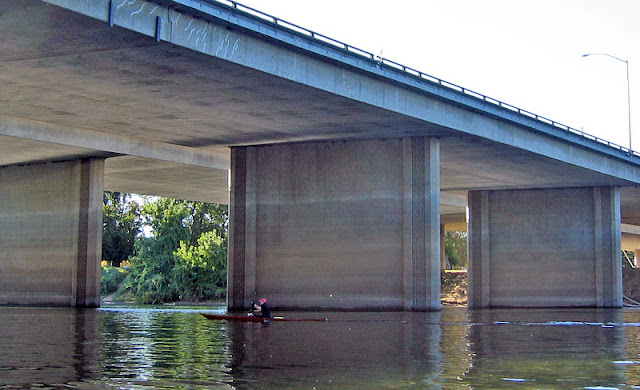 It's a mile and a half downstream from 12th Street to the next two bridges across the American River. The I-5 Expressway Bridges are a pair of 28-span, continuous concrete box girder superstructures supported on pier walls. Each bridge carries five vehicle lanes. They were built in 1968, which seems to be when most of the highway construction was going on in Sacramento.

Note the architectural treatment at the ends of the piers, the vertical exterior girder, and the rather monolithic appearance of these bridges. That must be the modern, streamlined appearance of late 1960s bridge design in California.

Besides the occasional kayak, you don't see a lot of boats on the American River. Just downstream (near the confluence with the Sacramento River) the speed limit restriction is lifted, the water is much deeper, and the river is filled with jet-skis, motorboats, and big yachts.