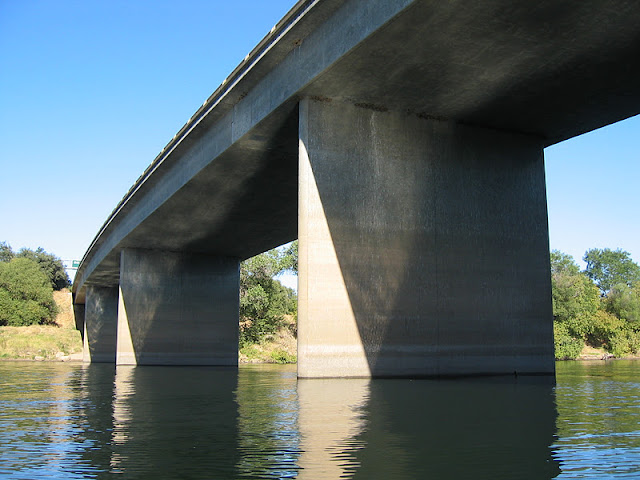 I spent some time trying to decide what to call this bridge. Caltrans named it the American River Bridge, but that's what they call every bridge over the American River. Its just where 16th Street becomes the right side of State Route 160 near downtown Sacramento and so I felt the 16th Street Bridge would be most descriptive. I also thought about providing the latitude and longitude for this bridge. Perhaps I can provide some header information about each bridge including the latitude and longitude?

You can see the two truss bridges we recently studied about 200 meters upstream. The 16th Street Bridge is a six-span, continuous reinforced concrete box girder bridge on very thin, wide pier walls. It was built in 1968 and carries three lanes of traffic northeast over the American River.

You can see the variation of water levels by the water stains on the pier walls. We are approaching where the American River ends at the Sacramento River. It is the confluence of these two rivers that is so often a source of flooding in downtown Sacramento. The last big flood was in 1986 and a lot of time, money and energy since then has been spent on strengthening the levees along these two rivers.