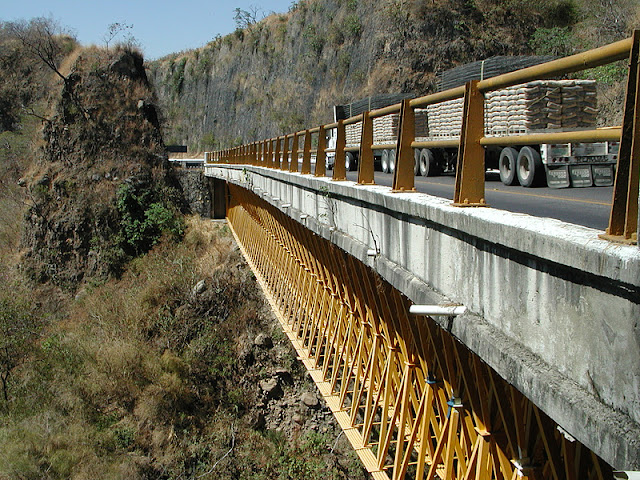 Continuing north from Viaduct Beltran on Route 54D across a narrow ravine on the one span El Tapon Bridge. This is another of those reinforced concrete slabs supported on a metal understructure like we saw on my blog of November 16th. That blog received an interesting comment from Norrin, who said that these truss-like structures haven't performed too well and have even failed.

This bridge reminds me of a prefabricated bridge system like the old Bailey Bridges that could be easily transported and set up in the field. At Caltrans we often use the undercarriages of old railroad cars as temporary bridges. Maybe this system is similar. It looks like it could be used as falsework to support bridge forms when pouring concrete superstructures.

Note the PVC pipe sticking out of the concrete barrier rail. This must be the deck drainage system to prevent the bridge from carrying too much water and possibly hydroplaning vehicles. Usually, we drain the deck with ducts that carry the water through the columns, which is a pain since the columns are already stuffed with reinforcement. Also, the ducts are always getting filled with debris and are hard to clean.

The truck that we see crossing the bridge has a tandem trailer (illegal in California) and it's carrying what looks like an heavy load of bags of cement and rebar cages. This suggests that at least this single-span bridge with its odd understructure was well-designed.

I'm sorry to disappoint you. This bridge withstands a hevy-load truck, but unfortunately not thousands of them. Fatigue has been a major problem here. On your picture you can see some repaired central connections of the space truss (the ones with a different colour). A lot of them have failed, either the flimsy plate that connects the posts or the posts themselves. The structure has suffered already large deformations due to all the failures. In fact, this picture was taken before a large number of the connections have been reinforced. And actually, this is one of the structures that will soon be replaced ... I just hope soon enough. As you said, it would have been a nice structure for a falsework.

By the way, drainage on mexican bridges is nearly always solved by simply adding some ducts to the superstructure. On this one at least it wasn't a vertical outlet as usual, else the corrosion problems of the steel structure would have been even worse. Even on urban bridges this system is very popular. They make for several small waterfalls in rainy seasons.

hello, what Norrin says its not true. No many bridges of this type have failed. this type of bridges are called "SPACE STRUCTURE BRIDGES" and the problem its that the must of this bridges were designed for hs-20 loadings 25 years ago. now Mexico has trucks with 72 tons load on 9 axes (t3s2r4) or 66.5 (imt 66.5) tons on 6 axes.
As you can see the diference its "brutal". Apart of this diference of loadings the mexican trucks do not follow the specifications and trucks wit 112 ton on 9 axes pass trough this highway.

there is no bridge that supports all these facts.

if some one has more doubts i did an examination of this bridge and the one caled "el nuevo" with 100 strain gages. on 100 different members. all of them working in the elastic range. an the distribution of live loads its great. in fact another result of my study to this bridge its that the static load of a truck is greater that the dynamic one produced by the same truck. so impact factor its a good safety factor.