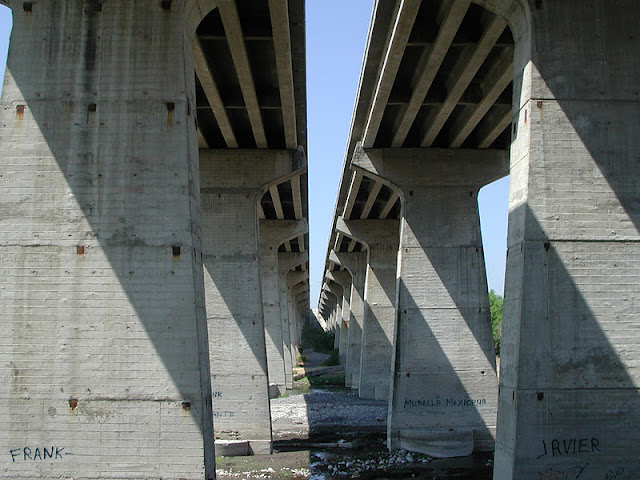 We've travelled from the State of California in the U.S. to the State of Colima in Mexico. This is a trip I took in 2003 to look at bridge damage following a large earthquake that occurred near the coast.

The State of Colima is a pretty region. I drove north from the coastal plain up into steep mountains with quaint villages and a cloud forest with very diverse flora and fauna. The region's economy seemed healthy and the earthquake damage was quickly repaired.

I was driving on Route 200, the highway from Manzanillo on the coast to Colima in the foothills. One of the first bridges I came to was the Rio Armeria Puentes, which are two 14 span precast I-girder bridges supported on tall, thin piers with hammerhead caps and on seat-type abutments.

I like the texture of the concrete, which looks like it was formed with something other than 4' x 8' sheets of plywood. This bridge was close to the earthquake epicenter, but the only damage was to the shear keys at the abutments and to tiny keys at the tops of the pier caps.