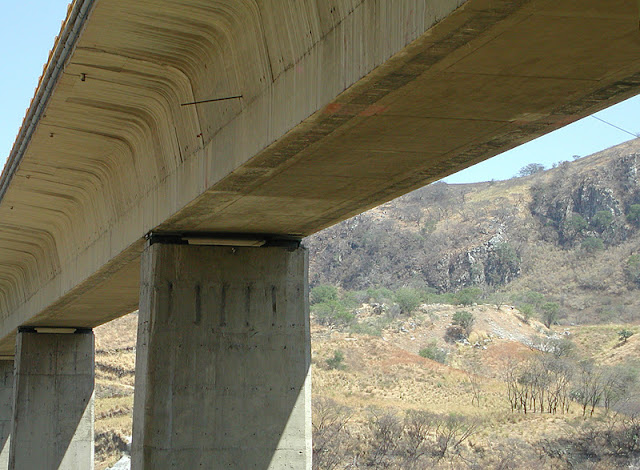 A closer look at the superstructure of Puente Atenquique II on Route 54D in Jalisco, Mexico.

I found this bridge referenced in Structurae. It was built in 1989, it has a 10.5 m (34.5 ft) wide deck, and it was build by incremental launching. We saw this technique used to build the Pont Charles de Gaulle in my blog of April 11, 2009. Although that was a steel bridge, the technique is similar. Box girder segments were cast behind the abutment, cured, and then pushed out with hydraulic jacks. It seems incredible to me that this 1/4 mile long bridge could be pushed out from one abutment!  It must have had a very high camber to have been cantilevered out so far without deflecting below the top of the pier!

A short article on incremental launching of bridges provided by the University of California at Berkeley is available on the Internet.  It looks as though a special nose is put on the end of the superstructure to help it get over the piers.

Note the squat bearings between the top of the piers and the bridge soffit. The superstructure must be able to slide on these bearings as it is pushed out across the canyon. Also note the rebar sticking out of the side of the superstructure. There must be a vertical diaphragm, perhaps at the end of each segment. I imagine each precast segment was pushed out and then post-tensioning tendons were attached to the next piece, which was also pushed out, until a completely post-tensioned superstructure reaches the other side of the canyon.

There are various different options for launching: the girder can be designed for the full cantilever with only a short launching nose (usually uneconomic); designed with a long launching nose; and either option can be supplemented by the use of temporary props in between the permanent piers. A final option is to launch on rails i.e. build girders in advance on which the main bridge is launched, but again this is rarely economic as the rail girders require significant support to maintain their stiffness.

Sometimes, the bridge is launched on temporary launch bearings, which avoid the main bearings being designed for launching, and allow you to launch the bridge at a higher level (eliminating the need for cantilever precamber), jacking it down only once in its final position. I would not have thought that would be economic for such a long bridge as this one, though.

Regarding the prestressing, launched concrete bridges often require two sets of prestressing, one to deal with the continually variable cantilever stresses, and one to carry the loads in the permanent spanning position.