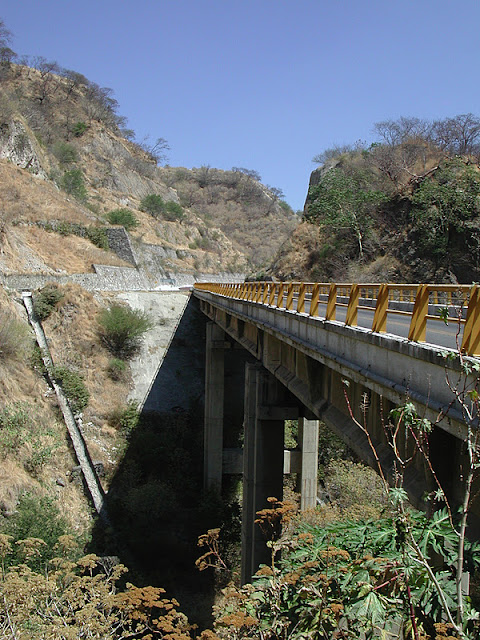 Another three-span precast girder bridge on two column bents and seat-type abutments. This bridge is very similar to the previously studied Puente Pialla.

Considerable effort was made to retain the slopes above the road and along the abutments. I like these handmade stone masonry retaining walls. The bridge seems more impersonal.

The deck looks like it is continuous across the three spans. The bridge crosses one of the many creeks (Acatas Creek?) running down the side of the volcanos.

Route 54D is near the base of these volcanos and runs parallel to a large river ( the previously encountered Armeria River?).

It looks like a road veers to the west away from the highway at the end of the bridge. There is a small gully a little west of the bride that drains this road into the creek.

This bridge also has asphalt spread onto the deck. This practice used to be common in California, and was sometimes done by road crews without asking the bridge engineer's opinion. It's even possible that there were expansion joints at the ends of the spans that were covered by the asphalt.

THE NAME OF THIS BRIDGE IS "AGATAS" AND NOT "ACATAS"