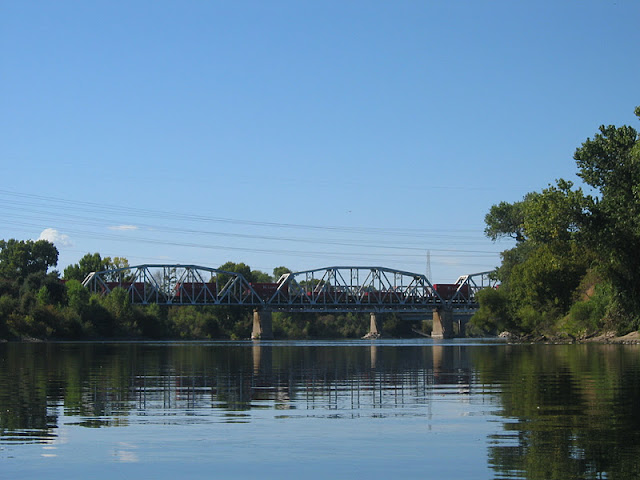 Although it's hard to tell from this photo, we are approaching downtown Sacramento on our trip down the American River. I took many of these photos from my kayak, which was difficult as the boat tended to rotate whenever I put down my paddle.
The Western Pacific Railroad Bridge is a three span, steel through truss structure supported on pier walls and seat-type abutments. Although the bridge crosses the river at a high skew, the piers were built perpendicular to the bridge (rather than parallel to the river) and so the designer didn't have to adjust the ends of the truss spans to match the skew. On the north end of the bridge is a short, timber trestle section that allows bicyclists to go under the two sets of railway tracks carried on the bridge. The pier foundations are clearly visible, even at high tide above the river's surface. When the bridge was built (at the beginning of the 20th century) the riverbed was much higher then it is now and the resulting lower river leaves the pier foundations exposed.

The Western Pacific Railroad was formed in 1903 to build a standard gauge track connection to the Pacific. The company was acquired by the Union Pacific Corporation in 1983.