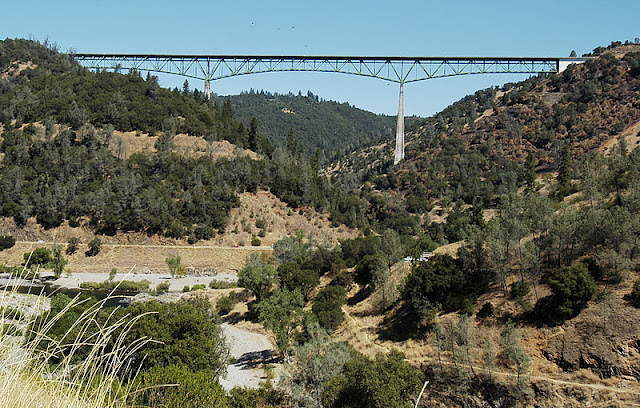 The American River flows out of the Sierra Mountains in California in three fast-moving streams. Just north of the confluence sits the Foresthill Bridge.

This bridge carries a local road (the new Foresthill Road) across the north fork of the American River. It was built in 1973 by the US Bureau of Reclamation at a cost of $13 million. The deck is 730 ft above the river and the 2429 ft long superstructure was supposed to span over a reservoir formed by the Auburn Dam, which was never built. The concerns of environmentalists and others eventually stopped this dam project.

I feel somewhat ambivalent about dams. Some of my best friends are dam engineers, including the late, great Leval Lund from LA Water and Power. Still, I think that we would be better off in the long run without them. Eventually, the Folsom Dam will fail, and over a million people live downstream.

I seem to be interjecting  a lot of my personal thoughts into this blog lately. I guess I'm really just trying to engage you, dear reader to respond to my blog. Google informs me that there are about 400 people a week reading this blog, but the only comments come from the kind and omniscient Happy Pontist.

I was reading in Bridge Design and Engineering about a bridge in Canada that was built to carry earthmoving equipment that would tear up the landscape in the search for oil sands. I was also reading about the building of roads into the habitat of the last tribes in Amazonia still untouched by our culture.

I guess we all feel a little guilty about the uses our bridges are put to, even though we are just trying to build something useful. I think that's why the Happy Pontist was writing about Bridges to Prosperity, Helvetas, etc. whose bridges are meant to help the poorest people (although they may be most helpful to the farmers and ranchers who live nearby). Anyway, over the next few weeks, we'll look some more at the Foresthill Bridge as well as at other bridges crossing the American River.