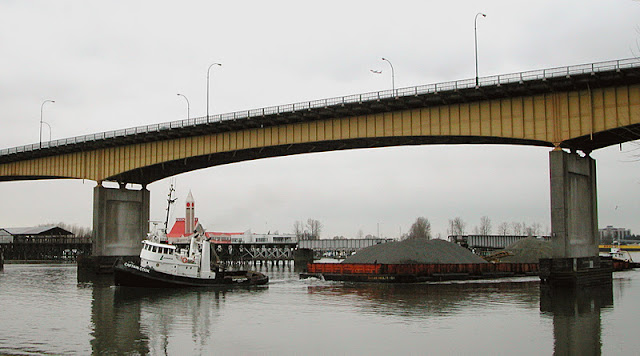 There's a third bridge (Cambie Street) across False Creek in Vancouver, but I never took a photo of it. South of Vancouver is the Fraser River, which splits into several arms as it flows into the sea.
Across the North Arm of the Fraser River (and just east of the airport) is the Oak Street Bridge. It is a long viaduct carrying Highway 99 on a plate girder superstructure. The main channel span is 91.4 m (300 ft) long, it has haunched girders, and it's supported on pier walls. The rest of the bridge has shorter girders and is supported on two column bents.

The Oak Street Bridge was built just east of the Marpole Bridge in 1957 as it's replacement. The girders from the previous Granville Bridge were made into barges and used to build the foundations of the Oak Street Bridge. It is said that traffic moved to the east with the opening of the new bridge, depressing businesses to the west. Tolls were charged for a couple years and then abandoned (for most bridges) in the early 1960s. The bridge was re-decked and seismically retrofitted in 1995.