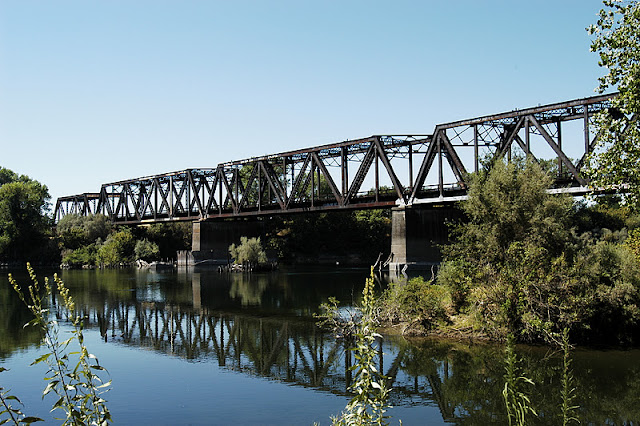 We're going to spend a couple of days studying a long viaduct that carries Amtrak and Union Pacific trains across the American River, just downstream from the Business 80 Expressway Bridge. This bridge includes a quarter mile long viaduct north of the river and a highly-skewed, five span steel Warren truss across the river.

I hadn't really thought about skewed truss bridges before. Because the trusses rest on skewed pier walls, the middle of each truss is built normal but the ends have triangular segments to match the skew.  Only the spans over the river are skewed. The rest of the bridge, including the trestle, have perpendicular supports.

A couple of years ago (on March 15, 2007) the timber trestle on the north side of the truss spans caught on fire. Sacramento had a couple of fire boats that raced to the truss bridge and sprayed it continuously while other firefighters concentrated on putting out the trestle fire. I guess the Sacramento Fire Department wasn't used to having fire boats because there were so many safety violations that the boats were taken out of service for three weeks after the fire. Apparently there was no oxygen tanks on the boat and so the firefighters were breathing toxic fumes for several hours. Also, the firefighters couldn't get their life vests on over their other equipment.  Fuel cans for the boat were sitting on the deck while they fought the fire. Also, the water pump for one boat was broken and the starter motor on the other boat was broken. Still, quick action by the firefighters probably saved the steel trusses and allowed Union Pacific to reopen the bridge eleven days after the fire.