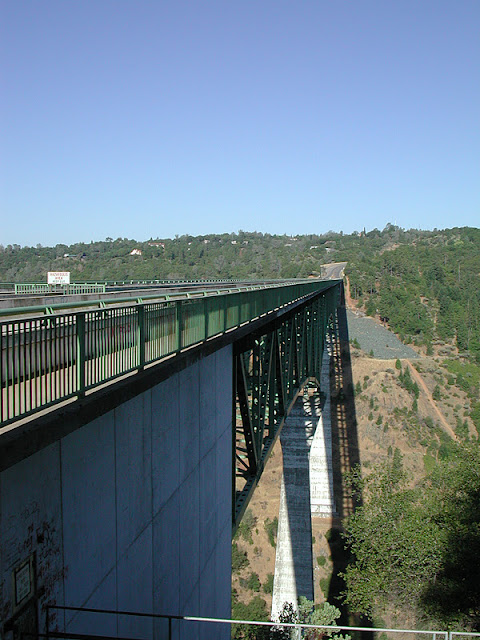 We have been studying the Foresthill Bridge over the last few days. The truss is under the deck, which makes it a deck truss bridge. Deck trusses are less of a headache to bridge owners since we don't have to worry so much about high hits, that occur on through truss bridges. On this bridge, the truss carries two separate decks with a drop of 700 ft between them.

The construction of such a tall bridge must have been challenging. First the abutments and the enormous towers were built and then the superstructure was started from the ends and eventually met in middle. For some reason, people are often surprised that engineers can design something precise enough so the bolt holes meet when the two sides come together. However, the displacement due to temperature and gravity is well known, and besides, steel is pretty flexible and can be stretched easily to bring the holes together for the final bolts.

There are several blogs that discuss the construction of the bridge. One is a short article from the Placer County Historical Society, but it includes a nice photo of the bridge being constructed. There's also a longer article about the politics of the bridge and the Auburn Dam.

Maybe we'll spend one more day at the Foresthill Bridge, and then we'll look at the many other interesting bridge that cross the American River.