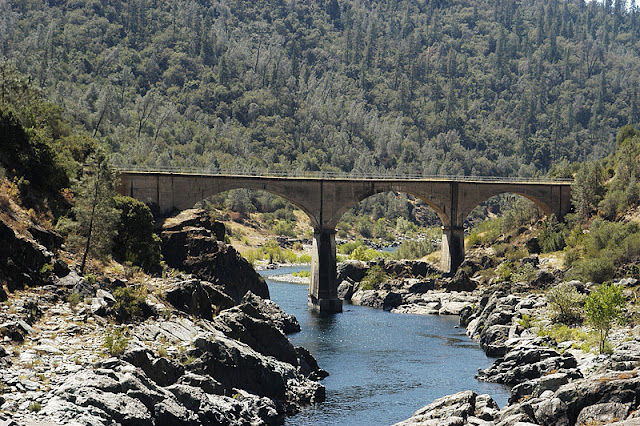 I don't have a photo of the next bridge downstream, which is the Highway 49 bridge over the North Fork of the American River. It is a three-span steel girder bridge that was built in 1948.

Although I can't find a photo of the bridge, I remember standing on it to photograph today's bridge, which is a railroad bridge built by the Pacific Portland Cement Company in 1912 to haul limestone out of a quarry. The quarry is no longer in use, the trestle approaches are gone (used as materials for the war effort), but the bridge is still used by hikers and equestrians along the Western Pioneer Express Recreation Trail. Moreover, the bridge is so strong, that it remained in service (and was used by cars) after the Highway 49 bridge was damaged during a flood in 1964.

It's a closed-spandrel reinforced concrete arch bridge with a deck 150 ft above the American River. It cost $300,000 and the labor of 800 workers to build and was claimed to be the longest reinforced concrete arch bridge in the world when it was completed in 1912. There's an excellent article about this bridge on a website provided by El Dorado County. It was originally called the Mountain Quarry Bridge but it's name changed to the No Hands Bridge because at one time it lacked a railing.