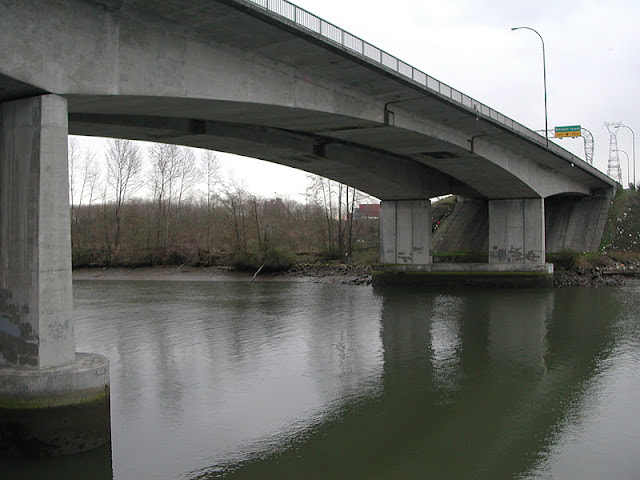 The next bridge (to the east) across the North Arm of the Fraser River is the Knights Street Bridge. It's actually two bridges that share an embankment on Mitchell Island. The shorter bridge crosses the channel north of the island from Marine Drive south to Mitchell Road. The longer bridge crosses the channel south of the island from Mitchell Road to Bridgeport Road. The total distance from Marine Drive to Bridgeport Road is about 2110 m (6920 ft).

It took from 1969 to 1974 to build these two bridges. They have four traffic lanes (with room for pedestrians and cyclists) and are owned and maintained by Translink, which is a government agency responsible for transportation in metropolitan Vancouver.

The accompanying photo is looking south at Mitchell Island and at the shorter north channel crossing. The superstructure is two reinforced concrete box girders supported on pier walls with a drop-in section over the channel. This bridge provides 79.2 m of horizontal clearance and 12.2 m of vertical clearance across the north channel. The longer south channel crossing provides 109.7 m of horizontal clearance and 20.1 m of vertical clearance. The north and south channels are suppose to be difficult to navigate and in fact, this bridge was built to replace a lower bridge that was routinely hammered by barges. It's ironic that in 2000 a barge carrying a tall crane slammed into the soffit of the south channel span, rupturing a water main, knocking a high pressure gas line off it's supports, damaging the bridge, and knocking the crane off the barge to the bottom of the river. The accident was investigated by the Transportation Safety Board of Canada. They suggested that the tug boat operator should engage in longer and more detailed discussions with barge owners about the height of whatever they will be towing.