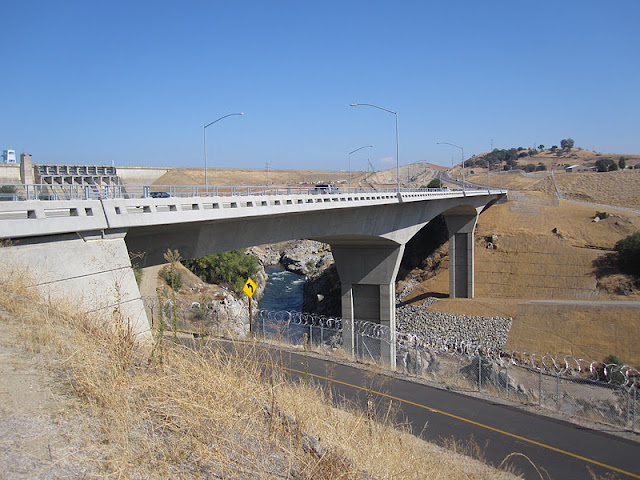 We must travel about sixteen miles downstream from the No Hands Bridge along the American River and past Folsom Lake to reach the next bridge, which was just completed a few months ago. The Folsom Dam Bridge was built because Homeland Security didn't want the public to drive on large dams after 9/11.

A friend just sent me some photos of a new bridge they're building across the Colorado River so that no one drives over the Hoover Dam. Similarly, after 9/11, people were prevented from driving over Folsom Dam, creating a traffic nightmare, that was eventually solved when the Folsom Dam Bridge was build a few hundred yards downstream.

I'm in no position to judge how serious a threat terrorists blowing up a dam is to U.S. security. I know that after 9/11, people came up to me occasionally and asked me why I was photographing a bridge, as if I was planning to blow it up! I thought that was being a little paranoid, but I'm probably in the minority. Anyway, more bridges means more work for bridge engineers!

I photographed this bridge (without a tripod) using auto-bracketing to create three images that were merged together in Photoshop to create a high-density-range (HDR) photo. However, I think the color looks a little strange. I rode my bike seventeen miles from my house along the American River Bike Trail to the bridge last Saturday. I was surprised by the razor wire on top of the fence (that ruined the photograph) but that's a small price to pay to be secure I guess.

As you can see, its a continuous, three-span, prestressed concrete box girder bridge on squat columns that look like an unfortunate choice for earthquake country. Caltrans requires spirals or hoops for transverse reinforcement, but these columns look like they're built with stirrups and ties. Well, this isn't a highly seismic area, and the bridge had to be reviewed by Caltrans, so it's probably okay.

In the computer graphics used as public relations for the bridge they show hikers and cyclists along the bike trail without any fences or razor wire to obscure the view.