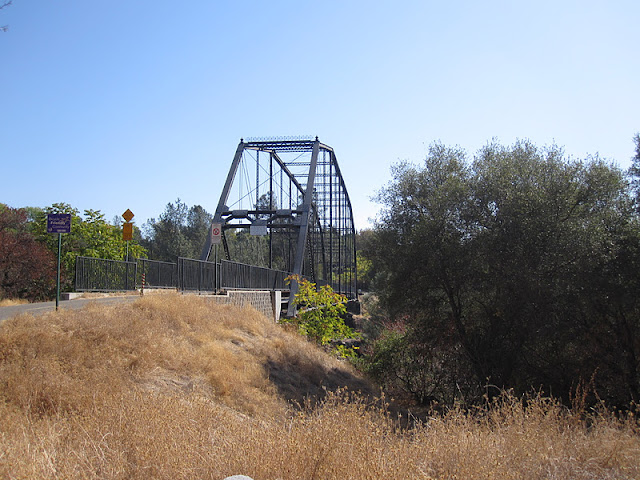 A couple of miles downstream from Folsom Dam are three bridges clustered together across the American River. The first bridge is a truss structure that replaced a suspension bridge at this site in 1893. However, it wasn't built to handle automobiles and it was closed after another bridge was built alongside of it. It was eventually moved to Northern California where it was used to cross the Klamath River. In the 1990's, it was brought back to Folsom, renovated, set back on it's original foundations, and used as a pedestrian and bicycle bridge across the American River.

My first impression was that this bridge was very tall. It has about a 330 ft span and it's about 30 ft tall, so maybe this kind of truss requires a 1 to 10 ratio between its depth and its span. I would guess that its a Pratt Truss with all the diagonals in tension, but I'm not an expert on truss bridges. If you know what type of truss this is, please let us know.

Truss bridges must have seemed the height of scientific progress in the 19th century, but now they are seldom used. Before computers, it was relatively easy to determine the forces on these structures that have no flexural members, just compression and tension members with pinned connections. They still seem to be a very efficient method of spanning long distances with a minimum of steel. Maybe some innovation in truss bridge design will bring them back into fashion or maybe they'll eventually disappear.

I used to bicycle on the bike trail and watched the work progress on this bridge in the 90s. I was there when the bridge was moved into its final position with huge jacks and other devices. Thanks for the great photos.